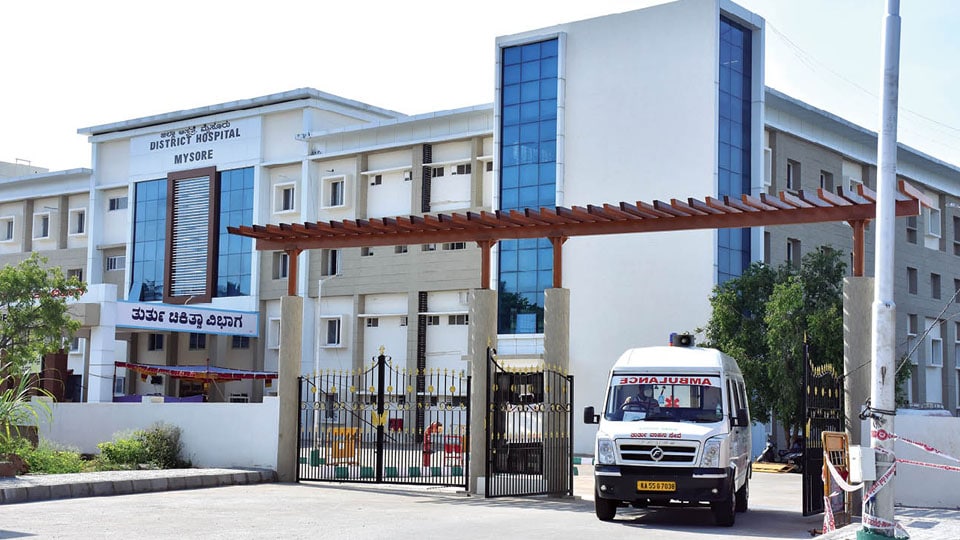 Mysore/Mysuru: With the District witnessing an exponential rise in COVID-19 positive cases, Deputy Commissioner Abhiram G. Sankar said that the designated COVID-19 Hospital on KRS Road and the ESI Hospital, also on KRS Road, will have a total of 70 beds  ready at any point of time for meeting any medical emergencies and treatment of critical COVID patients.

Speaking to presspersons at the ZP premises here yesterday, Abhiram G. Sankar said that 70 beds will be exclusively reserved for critical patients in order to ensure that there will be no delay in treatment for want of beds.

Maintaining that there is no dearth of beds, he said that 45 percent of suspect patients are in Home Isolation in the District and Private Hospitals too have begun treating COVID patients.

Pointing out that apart from the Microbiology Department of MMC&RI (K.R. Hospital), the throat swab tests and rapid testing are being conducted in JSS and Apollo Hospitals in the city, the DC said that about 1,300 persons are being screened daily with the aid of added testing facility

and this rise in number of tests may be the cause for detection of more number of positive cases in the District. Emphasising that early detection holds key for keeping mortality rate very low, he called upon the people to get tested as soon as they display COVID-19 symptoms.

Abhiram G. Sankar said that most notably, a 93-year-old woman, who was infected with the virus, returned home last week after full recovery.

Stating that this is an example to prove that grit and determination holds key for recovery of even elderly infected persons and the people need not unnecessarily get panicky, he said that many aged patients have recovered from the disease.

Referring to some positive patients going missing, he said that such cases are common everywhere and Police help is taken for tracing such patients.

Replying to a query on the incident where a primary contact of a positive patient had given his (DC) cellphone number to the authorities during throat swab test, Abhiram Sankar said that the quarantine violation call that he received, shows the efficiency of the COVID control system that is in place and he felt glad for it.

Stating that he received the quarantine violation call from the COVID Call Centre at Mysore Palace and from a Bengaluru Call Centre, he said that the callers had warned him against violating quarantine norms, which explains the dedication of the staff. However, the callers were shocked when he informed that the person whom they had called was in fact the Mysuru DC.

The DC, however, said that the primary contact person who gave his details, had in fact given his correct address and had got his mobile number wrong, which resulted in this episode.

He asked the people to give their personal details correctly during tests and he added that people must understand that giving correct information is vital for the protection of their health.