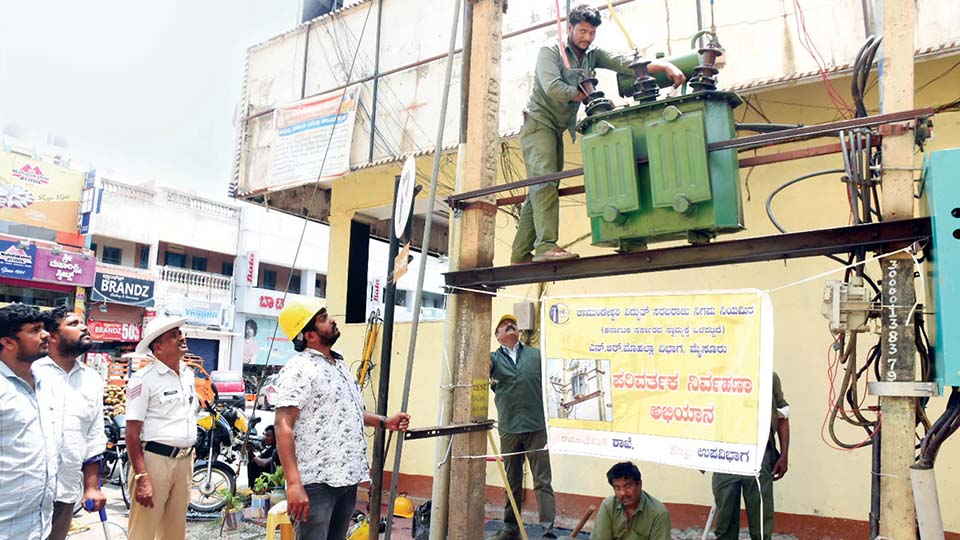 On day one, 1,535 transformers restored to optimal condition

Mysuru: As monsoon is approaching, the Department of Energy has launched a massive transformer maintenance campaign across the State from May 5 to 20 to avoid transformer-related disasters.

CESC has set aside Rs. 50 crore for real-time maintenance of transformers to ensure uninterrupted and accident-free power distribution. There are plenty of transformers older than 15 to 20 years and they cause maintenance problems during the rainy season. Rain and thunderstorms damage the transformers and the other reason for their damage is power overload.

In Mysuru, 239 teams have been constituted for the repair, maintenance and replacement of transformers and each team will carry out maintenance of three transformers every day and each transformer will need over three hours to be restored. CESC has a massive task of restoring 1,64,018 transformers under its jurisdiction.

Over 311 teams have been formed in Hassan, 170 teams in Mandya, in Chamarajanagar and Kodagu, 76 and 50 teams respectively have been constituted. Periodic maintenance would reduce the cost of repair and the campaign would also be able to identify locations where new transformers would be immediately needed, said CESC Managing Director Jayavibhavaswamy.

After launching the drive at Kuvempunagar, he visited a couple of places where the transformers were being repaired including Vidyaranyapuram. Jyothinagar, D. Devaraj Urs Road and R.T. Nagar. All the teams in the CESC jurisdictional districts have been given daily targets to complete the massive task, he said.

The intention is to provide safety to the public and to prevent transformers installed in public places from developing fire hazard in the event of a fault in the electricity distribution lines, he added.