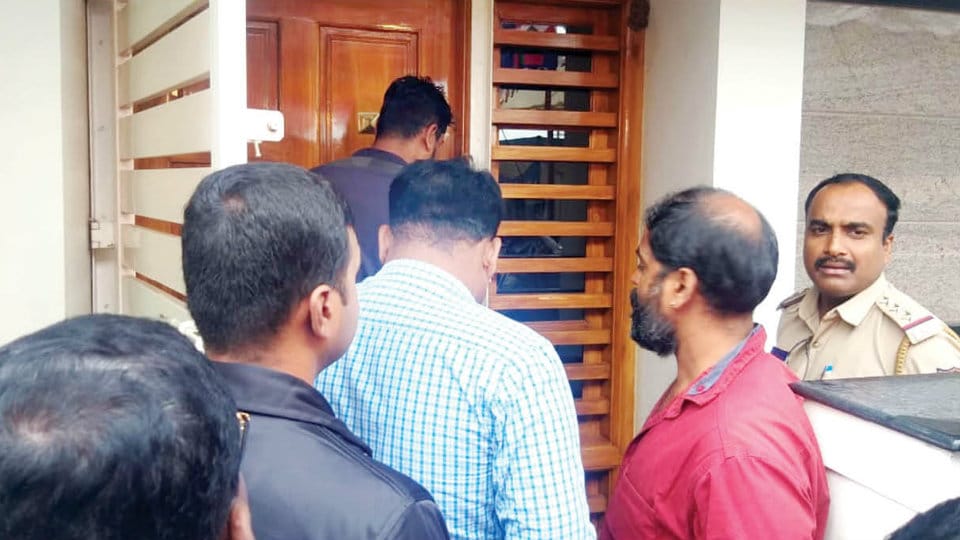 Mysuru: The Gundlupet Police, who are investigating the case of Familicide that rocked the city yesterday, have taken the possession of the Dattagalli villa where the family of Omprakash Bhattacharya, a businessman and entrepreneur, lived. In the wee hours of Friday, Omprakash shot his wife, son, father and mother on the outskirts of Gundlupet and later shot himself with a pistol.

The incident has sent shockwaves at Dattagalli where the family lived and the neighbourhood of the posh locality has been numbed by the tragedy that struck a well-to-do family. This morning, the Gundlupet Police took over House Number 18 (Anantha Padmanabha Nilaya), Gravity Line near Jodi Bevina Mara at Dattagalli. They opened the door in front of the family members and  conducted a mahazar.

At 8.30 pm yesterday, the bodies of Omprakash, his wife Niharika alias Nikhita, son Arya Krishna, father Nagaraja Bhattacharya and mother Hemalatha alias Hema were brought to Dattagalli after the post-mortem and were kept in coffins outside the house. As the Police were required to open the doors, the bodies lay outside.

This morning, Gopala Bhattacharya, the brother of Nagaraja Bhattacharya and family came from Chikkaballapura.Hearing about the tragedy, Omprakash’s sister Nandini and her family had arrived at Gundlupet and fetched the bodies to Mysuru.

This morning, the bodies were kept in front of the house under German tents and public and relatives were allowed to pay their last respects.

At around 11 pm, the bodies were together shifted to the foot of Chamundi Hill where the last rites were performed by relatives and family priests. Relatives and public were particularly upset at the death of the young Arya Krishna who was just four and was unable to comprehend what his father was going through that forced his dad to take this drastic step.

Neighbours and relatives also shed tears for Nikhita who was eight-month pregnant. Nandini was unable to control her tears when she was applying ‘tilak’ on the foreheads of the dead bodies as part of the rituals.

House doors opened: The doors of the house were opened under the leadership of Gundlupet Circle Inspector H.R. Balakrishna and team. The doors were opened with the written consent of the family members. On entering the house, the Police found that the family had packed their clothes and belongings.

Speaking to Star of Mysore, Circle Inspector Balakrishna said that initial observations inside the house show that the family had packed up to leave to an undisclosed location. Fingerprint experts and dog squad also recorded their initial observations.

“It looks like Omprakash was under severe pressure. We have also learnt that he had hired gunmen to protect him and his family. We have taken over the house and the mahazar will continue for four to five days and no one will be allowed inside. Also, we will record the statements of relatives, neighbours and all those vendors who  supplied essentials to the family,” he said.

Hawala angle to be probed

“Though it looks like Omprakash was under severe financial pressure, we cannot determine the exact cause of his brutal action as of now. The Hawala angle where crores of rupees has reportedly landed in Omprakash’s  bank accounts will be probed in detail and his call records of at least 6 months will be examined,” the Police officer added.

Omprakash’s sister Nandini told the Police that though her brother was under severe business losses, he had cleared loans borrowed from relatives. “Only last week he had  come home and handed over Rs. 4 lakh that he had borrowed from a relative. In the end,  he begged my forgiveness  and I am not able to comprehend the reason,” she told the Police with tears rolling down her cheeks.

Initial clues say that Omprakash had formed Arya Film Combines in the name of his son and had invested Rs. 60 lakh on an animation project. He had lost all the money. “Every angle will be probed and all the documents and papers inside the house will be scanned for clues,” Inspector Balakrishna added.