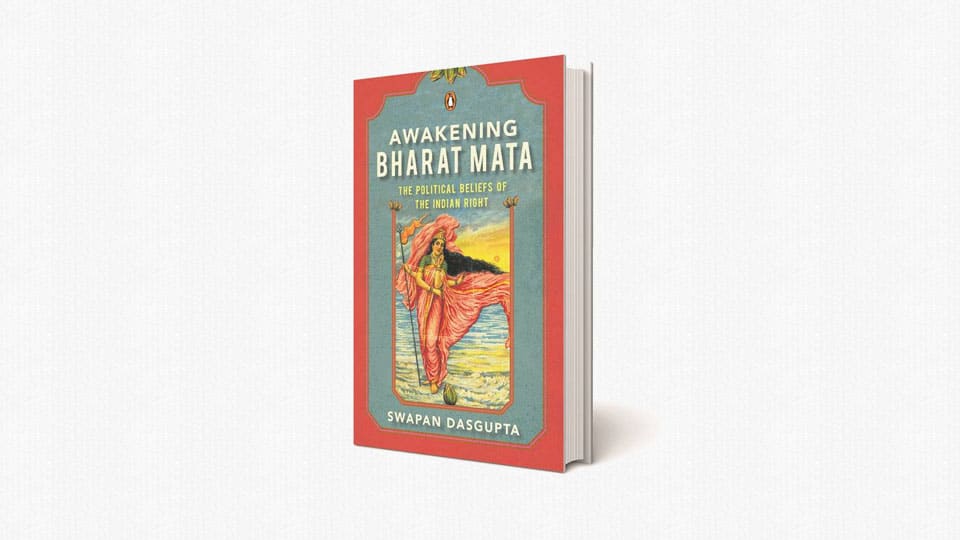 The title of the book says it all. This is about the socio-political transformation in, what Hindus call this motherland, Bharat Mata. It is about the disenchantment with pseudo-secularism and emergence of Hindutva as a political power.

In 2014, BJP came to form the Government at the Centre as a leading party under the banner of  National Democratic Alliance (NDA). And it was a momentous time for a party which in 1984 had only two members in the Lok Sabha and the backdrop of 1999-2004 coalition experiment under the towering leadership of Atal Bihari Vajpayee.

Under the leadership of Prime Minister Modi during  2014-2019,  NDA took some very hard and courageous decisions within its early years. One of them was  demonetisation, as a step to curb black money. Demonetisation caused all round resentment due to widespread disturbance in day- to-day cash transaction.

Second was the law against the menace of Triple Talaq among the Muslims. This period witnessed several partners like Telugu Desam leaving NDA and some others like Shiva Sena snapping the BJP.

Consequently, the Opposition parties were salivating at the anticipatory definite drubbing for NDA in the ensuing elections, both at the Assembly and in 2019 LS elections.

Yet, in 2017, BJP won two-thirds majority in Uttar Pradesh Assembly polls. And in 2019 elections to LS, the BJP returned to power with a majority of its own under NDA. This signified a tectonic shift in the country’s political scenario. That a non-Congress party with rightist political dispensation could form a stable Government for five years and that it could consecutively return to power with redoubled strength has baffled all political pundits.

Further, Modi, who was lampooned as an ordinary ‘chaiwallah’ and stigmatised as the cause for 2002 communal riots in Gujarat, dominated  the LS elections in 2014 and 2019 and established himself as a colossal figure in the political scene of the country. He has proved that a party with rightist leaning can form the Government at the Centre provided it can convince, all sections of people, of the leader’s honesty and integrity. The simmering disgruntlement among the majority community caused by vote bank politics, crony capitalism and all-round corruption under every Congress rule, took a significant rightist turn after Ayodhya incidence in 1992, much more so during 2004-2014 Congress rule. And in 2014, Narendra Modi gave a much-needed leadership push to the Indian right. Resultantly, Hindutva captured the political power at the Centre and in many of the States as well. Saffron became the accepted dominant political colour.

This transformation in socio-political scenario of the country is presented by Swapan Dasgupta in this book with a unique format. It is a compendium consisting of his own articles and articles authored by, or on eminent men and women who have chartered the path of Indian right. The book is unique in many ways. The cover page has a painting by Akangksha Sarmah where Bharat Mata, Mother India is depicted as a map of India and she is shown in a very thoughtful posture. Secondly, the author very imaginatively has placed a three-page patriotic poem  Vande Mataram in praise of motherland. It is in English version translated by Aurobindo. It is a very apt preamble to the compendium. It points to the role played by littérateurs in arousing patriotic Hindutva fervour. But for the Nehruvian penchant for ‘secularism,’ this poem would have been the National Anthem of Free India!

Third feature of this book is the preface containing 75 pages of articles by the author, categorised into three chapters: 1. Political Context, 2. Motherland, Religion and Community, 3. Politics and the Hindu Narrative. They provide a good perspective for the rest of the contents. Subsequent pages of the book contain what author prefers to call as Readings. Author’s elaborate 48 pages of introduction to the Reading give a bird’s eye to the academic feast a reader will have thereafter.

Readings are divided into three parts. Part-I: The Motherland and Nation-Building has eight articles by writers such as Bankimchandra Chattopadhyay, Sri. Aurobindo, Sister Nivedita, R.C. Majumdar, M.G. Ranade and R.G. Bhandarkar. Part-II: History has seven articles on topics such  as the “Guiding Principles of the new Maratha strategy, aggression — not merely defence” by V.D. Savarkar, Shivaji by Jadunath Sarkar, On Hinduism by Nirad C. Chaudhary, Education in India by Anand K. Coomaraswamy, on Secularism by Sita Ram Goel among others. And, Part-3: Fault Lines has nine write-ups such as On Minority Rights by Sardar Vallabhbhai Patel, Bhiwandi Riots by Atal Bihari Vajpayee, A Class of Classes and Cultures by Nirad C. Chaudhary, The Nehruvian Framework by Girilal Jain and Hindutva: The Kinetic Effects of Hindu Dharma by S. Gurumurthy.

Swapan Dasgupta is a prominent Journalist and Historian. A BJP Rajya Sabha Member, he has worked in senior editorial positions in most of the leading newspapers in India. He has impeccable educational qualifications with a Doctoral Degree in History from the School of Oriental and  African Studies (London). He was a Research Fellow of Nuffield College, Oxford. And in 2015, he was awarded Padma Bhushan. He is a Stephenian (Delhi) and his TV debates reflect his professional and academic brilliance.

This book of 428 pages is a highly researched work. It has very thoughtfully and cohesively knitted different boundaries of topics and times. It provides elaborate chapter-wise notes and very useful index. This book is a historical perspective of the socio-political churning that is taking place in the country today. Therefore, it is a very timely publication.

Book Talk R. Chandra Prakash Swapan Dasgupta
UPOR: Hospitality and service must be experienced to be believed
Farewell to Tokyo