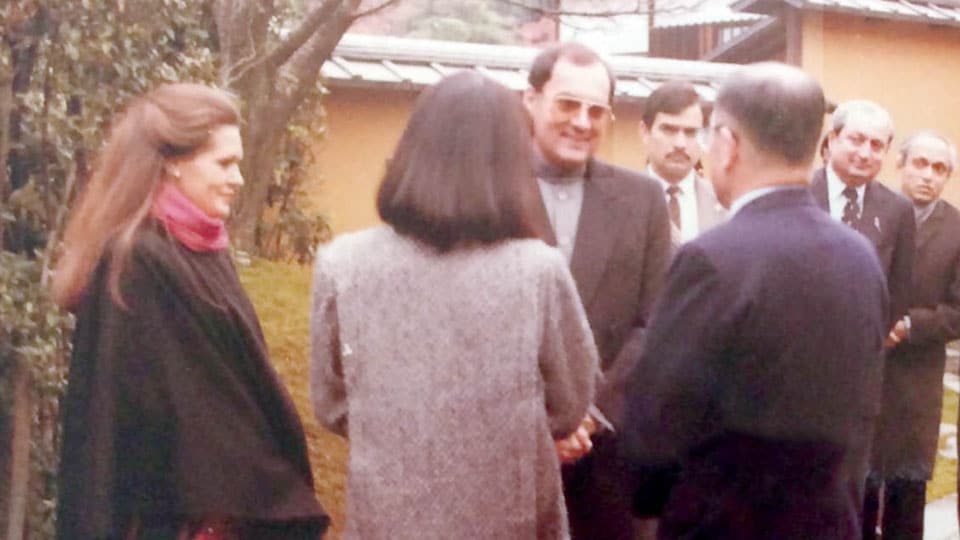 A few months into a new diplomatic post, normally of three years, I would settle into a comfort zone, at ease with the local language and customs. As time wore on, a familiar angst would appear, “Where next?”

Our stay in Japan, where my husband, A. Madhavan, had been posted as Ambassador from 1985 to 1988, was to end soon. I had enjoyed this time very much. I learnt ink painting from a fine artist, the people were warm and friendly, their politeness exemplary. I had happy memories of our Residence in Tokyo. I remember refurbishing the dilapidated Shinto shrine of Amaterasu in the garden placing on its shelves, salt, sugar, sake and water and a mirror on top, the symbol of the Goddess. After his coronation, Emperor Naruhito had spent a night at the great temple of Goddess Amaterasu to get her blessings.

I recall “The cat buffet” on the garden’s ornamental rocks  where a bobtailed cat, “Poonch Katta” [named the “tail-cut-one” by our Garhwali help], would feast on titbits laid out for him under the magnolia tree, adorned with delicately perfumed blooms.

The time had been busy with three tense Prime Ministerial visits and other simpler, endearing moments.  We met Indian artists who came to Tokyo; Aravindan, the film director, film star Deepti Naval who found a common interest with Madhavan in literature and poetry and Basu Bhattacharya, the film director who sang old film songs with me.

I was sad to see in the papers in  November 2019 the obituary of Nabaneeta Deb Sen, the first wife  of Dr. Amartya Sen. She stayed with us for a few days on her way home to India from Europe. She did not want to go sightseeing or shopping, only to meet Japanese poets. At short notice we got together a few of them who read out English translations of their work. An elderly Japanese with spiky grey hair and thick glasses, read out his poem, “Castle and White Horse”, ending with a crescendo of shrieks and a deep bow. His passionate rendition was received enthusiastically by Nabaneeta.

After the third visit to Japan of Prime Minister Rajiv Gandhi and Sonia Gandhi, our transfer order arrived. By mid-May Madhavan, at short notice, was required to be in Bonn as Ambassador to the Federal Republic of Germany. The Vice-President of India was arriving there on an official visit followed by PM Rajiv Gandhi himself. However, till the signing of diplomatic protocols like the “Agre’ment” between the German Foreign Office and our Ministry of External Affairs, we were not allowed to announce our imminent departure from Japan. We filled suitcases in our spare moments; Achkans, Galabandh jackets, suits, ties and footwear for formal events, suitable sarees for me. This caused some whispers among Embassy staff. Were we in disfavour to leave so soon after a PM’s visit?

We were exhausted by the time we could finally announce our new posting. From the far East to the far West, the two dissimilar countries, Japan and Germany, had only one thing in common: during World War 2, they had been allies in the Axis bloc fighting the West.

Our itinerary was to fly the Polar route from Tokyo to Anchorage, Alaska and then on to Frankfurt.  As I sat in the Nissan limousine ready to leave, looking at the familiar garden and hoping to catch a last glimpse of Poonch Katta, Madhavan was called away to the phone. As we were only in transit through Alaska, the Chancery of our Embassy had not procured US visas for us, creating a problem with the US Consular office. Finally a call was put through to the US Ambassador; the Indian Ambassador Designate was on his way to Germany and unlikely to break journey in Alaska. Finally, we were on the familiar route to Narita Airport.

“Ted Stevens Anchorage International Airport” was named after Senator Ted Stevens, US Senator from Alaska from 1968 to 2009. As we entered the airport, our Garhwali help, Khem Singh, was startled; there were two stuffed polar bears behind a clear glass screen; and farther down, a grisly bear towered over the passengers. He gasped, “Yeh Joo garden hai kya?” Though modernised now, the airport still reflects Alaskan pride in the fauna and snow-clad scenery of the country. As we took off, it was exhilarating to see from the aircraft, majestic Mount Mckinley, often obscured by mist or snow, glittering on the horizon on that unusually clear day.

From Frankfurt we boarded the Lufthansa train to Bonn. The landscape that flashed by was palpably different from the scenery of Japan, left behind just hours ago. Members of the Embassy were at the Bahnhof [Railway Station] to receive us, puzzled that we bowed to them from habit. The official car was a black Mercedes driven by elderly Ram Singh, chauffeur for the rest of our stay.

As we approached the residence, Ram Singh, a chatty and friendly soul, asked me to watch out for it, saying it looked like a “Kila” or fort. “Villa Marienforst”, reputedly a hundred years old, was rented from the owner, Farmer Houtrop. A 14th century barn stood in the large garden and legend had it that there was once a small church in the grounds where Beethoven used to play the piano. This was where the next three years of my life were to be played out.