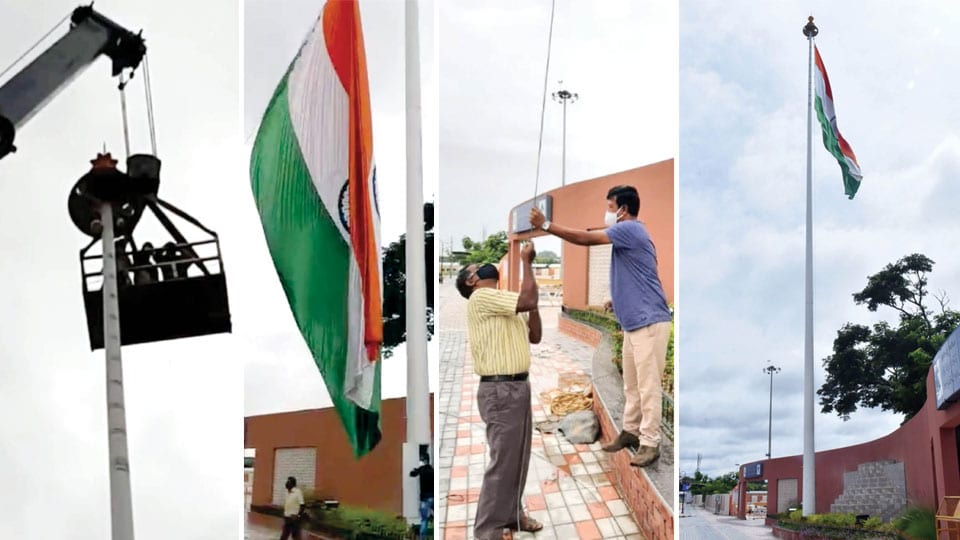 A monumental effort to unfurl Monumental Flag at Railway Station

Mysore/Mysuru: Over three technicians spent more than two hours to replace the thread to tie the huge Tricolour at the City Railway Station last evening. The thread was replaced as it had got struck and it was unable to unfurl the flag.

The activity was done ahead of Independence Day on Aug. 15 to prevent any glitches during the ceremonial flag hoisting. The Monumental Flag is in the in the circulating area of the City Railway Station. The 100 ft. height mast with 30 ft. x 20 ft. flag has been established by Flag Foundation of India (FFOI) as part of the renovation and beautification work undertaken at the Station months ago.

Due to weather conditions, the thread to unfurl the flag was worn out and had to be replaced as it used to get struck, obstructing the smooth unfurling. Three technicians – Senior Technician Doreswamy, Tec III M. Keshava Murthy and M.S. Kumara were lifted with the help of a crane to reach the top of the 100 ft flag mast.

First the technicians were made to stand on a bucket-like structure in such a way that the balance is not tilted. Later, the crane lifted them up and the huge flag was removed and brought down. Again the three persons were brought down to fix the tread and later they again were lifted to refit the flag. The process took more than two hours.

Once the flag was restored back in position with new threads, the staff heaved a sigh of relief. Also, the flag was closely checked for damages if any as it is perennially in the unfurled state. As per protocol, the Tricolour must not touch the ground at any point of time and enough care was taken so that the big flag did not touch the earth.

READ ALSO  When you fall in Love with a city

In Mysuru, only the City Railway Station and the Mysore Airport at Mandakalli have such huge flag masts and flags. The Monumental Flag is made of knitted polyester fabric called Deneir Polyester. The Chakra of the flag is printed by using specialised printing process.