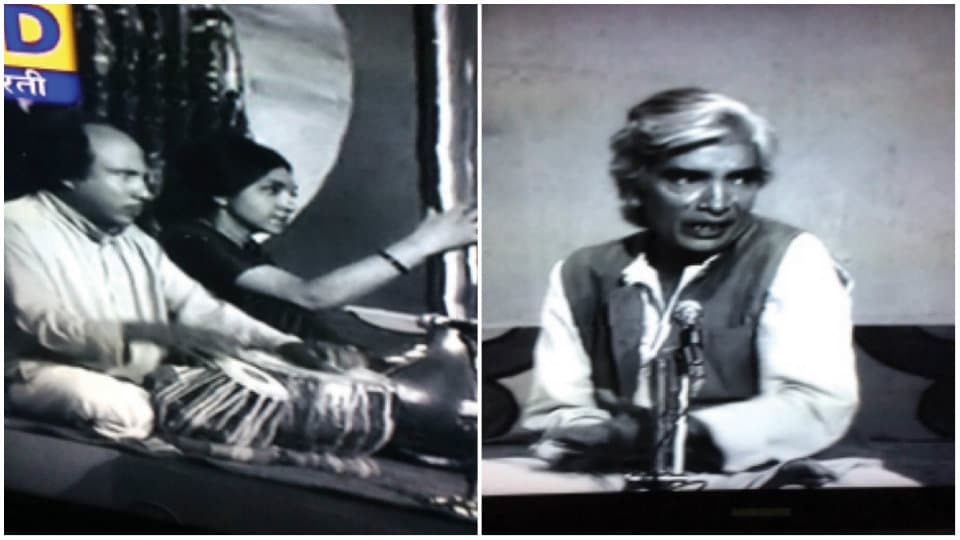 Concerts from the archives of Doordarshan can be evocatively nostalgic. One afternoon I chanced upon a “National Programme” of Hindustani music of 1981, the photography in black and white. It featured the late Pandit Amarnath, the foremost disciple of Ustad Amir Khan of the Indore Gharana. When I lived in Delhi for a few years, I had learnt vocal music from him and addressed him as “Guruji.”

Missing the initial announcement, I recognised Guruji’s face on the TV screen and called out to my husband to watch the programme with me. Then I saw a woman playing the tamboora for the musician. I was startled. “Oh! Oh! That’s a familiar face, I know this woman!” I thought. Then in a surreal flashback, I realised the woman was myself 36 years ago!

In that concert I was playing one of a pair of tambooras of Guruji. Named “Ram” and “Lakshman,” they were of smooth, honey-coloured wood with no ivory inlay or embellishment, producing a mesmersingly mellow and serene sound. Ustad Faiyyaz Khan was on the tabla. Guruji began the Vilambit Khayal in the Raga Jaijaiwanti.

When the letter from Doordarshan came to Guruji, I was in his class at Bharatiya Kala Kendra established by Shrimati Sumitra Charatram. He was explaining the Raga Jogkauns to his advanced pupils like Asha Jain [the niece of Shrimati Charatram] and the late Shanti Sharma.

Choosing the Ragas he would present, Guruji asked me to go to the DD Kendra in New Delhi’s Parliament Street to inform the Director of his decision. The main Raga was to be Jaijaiwanti followed by Madhukauns. “I won’t write this down,” said Guruji, “Since your husband is called Madhu by his friends, you won’t forget the name!” I met the Programme Director.  “Panditji will sing the Ragas Jaijaiwanti and Jogkauns” I told him and hurried to get back home. Boarding the bus, something bothered me. “Jog? Jogkauns?” My memory suddenly “jogged” me. Scrambling off the bus, I went back to DD, just in time to correct the mistake I had made in the name of the Raga!

Pandit Amarnath was born in Jhang [now in Pakistan] in 1924. He escaped the trauma of partition, getting away to Delhi. He spoke of his memories of Ustad Amir Khan. There were no set times for lessons, it depended on the mood of the teacher. Once when Guruji was hard up, Amir Khan decided to teach him a composition in a new Raga. Caught with no notebook or paper with him, he wrote down the precious lesson on a ten rupee note. He could not cash the note to pay for his fare and had to walk a long way home!

Guruji composed a Ghazal for a film on Ghalib setting the poetry to music which he requested Ustad Amir Khan to sing. The Maestro demurred at first but rendered the song memorably. The lyric began with the words “Rahiye ab aisi jagha chalkar jahan koyi na ho.” It can still be heard on YouTube.

Guruji also composed the music for a film named “Garam Coat,” an adaptation of a short story by Nikolai Gogol, “The Overcoat.” It starred Nirupa Rai and Balraj Sahni. Lata Mangeshkar was the playback singer. Guruji recalled that she needed very little rehearsing and rendered songs perfectly, even making little improvements on the original composition. A message would come from her home, “Lataji is on her way.” She would arrive in a white sari with light colours, the pallu covering the two braids she favoured, diamonds flashing in her ears. The orchestra being ready, recording would start with no delay. She once said that the song, “Jogiya se preet kiye dukh hoye” of Garam Coat, was one of her favourites. When the songs were recorded, Guruji took out his cheque book and asked her to name the amount. Lata said she would only take one rupee from him.

Guruji passed away in 1996. His daughter, Bindu Chawla, paid tribute with writings and TV presentations. Guruji’s younger daughter, Gajra Kottary, is an author, known also for her screen play of the “Balika Vadhu” television series.

I no longer sing but am grateful to Guruji who taught me to value the beauty of music; I can now understand, enjoy and be moved by it.