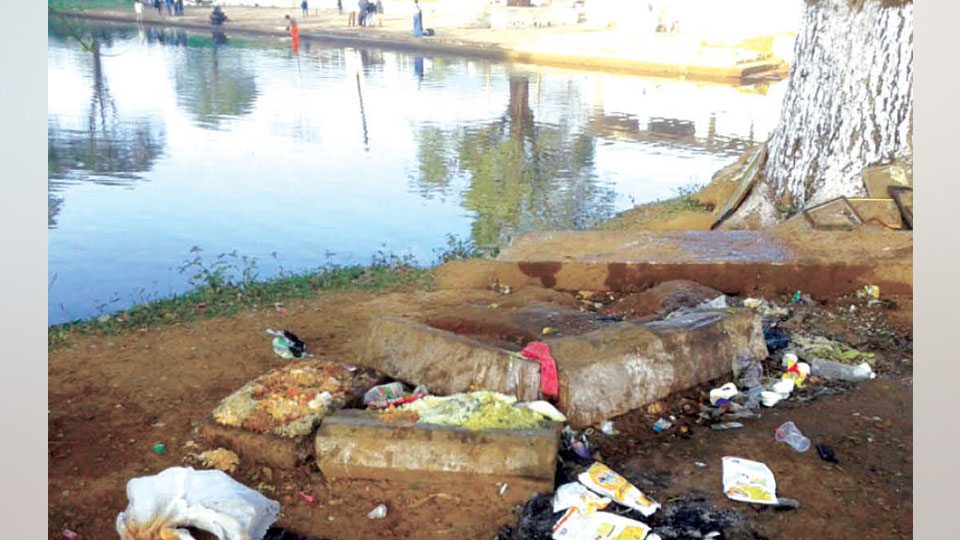 Bhagamandala: The holy destination popularly called as the Ganga of the South, nestled in the lap of the Cauvery River and with the blessings of Bhagandeshwara- Bhagamandala- today is no more the scenic beauty and the sacred place that it is known to be but instead the whole environment is stinking.

The hordes of tourists arriving here in the guise of devotees are destroying nature and causing harm to the air around the holy place. The tourists are found cleaning the vehicles in the vicinity of Sri Bhagandeshwara Temple, throwing waste, leftover plates and glasses into the river. This is not only affecting the environment but also polluting Cauvery river.

The tourists do not have even a semblance of care for environment protection. They use firewood, twigs and other materials to cook food by the side of the river, (which is a confluence of three rivers-Cauvery, Kannike and Sujyoti) and then throw leftover sambar and rice into the river. As a result, the Triveni Sangam is polluted.

Bhagamandala is not only a holy place for Kodavas but there are people from all over the country, who visit the sacred place considered a pilgrim centre. However, people who come here to perform rituals for the dead are facing problems.

They have to take a bath after the rituals to wipe out the sins and accumulate virtues, instead if they take the holy dip then they have to carry many diseases.

The whole place is filled with filth and mountains of waste and the rice and sambar are found floating on the river. However, the Bhagamandala Gram Panchayat, which has to protect the environment, is interested in only levying and collecting fees from the tourists.

Do the environmentalists who fight for the cause of keeping the surroundings of Bhagamandala clean and those who are interested in gaining power at any cost not seeing the eyesore and the damage being caused to the holy river? Is it not an irony that we look helpless on the onslaught of the tourists’ lack of concern and callous attitude of the powers-that-be for maintaining the environs? waste dumped by the tourists at Bhagamandala.

Cauvery River is already declared a polluted river and one cannot drink the water without treating it. However, Kodagu Deputy Commissioner P.I Srividya, who is also the Chairperson of the District Muzrai          Department said that she is aware of the problems at Bhagamandala and is viewing it very seriously.

READ ALSO  Despite opposition from villagers and devotees of Goddess Cauvery: Mega Sai Baba Temple coming up at Bhagamandala

“The cooking near the Triveni Sangam will be banned as a first step,” she said. It is not only the responsibility of the Government but also of the citizens as they have to realise what are the dos and don’ts while visiting sacred places and their role in maintaining cleanliness. If the pollution of the places continues,  the future generations will only curse us for disregard for environment.