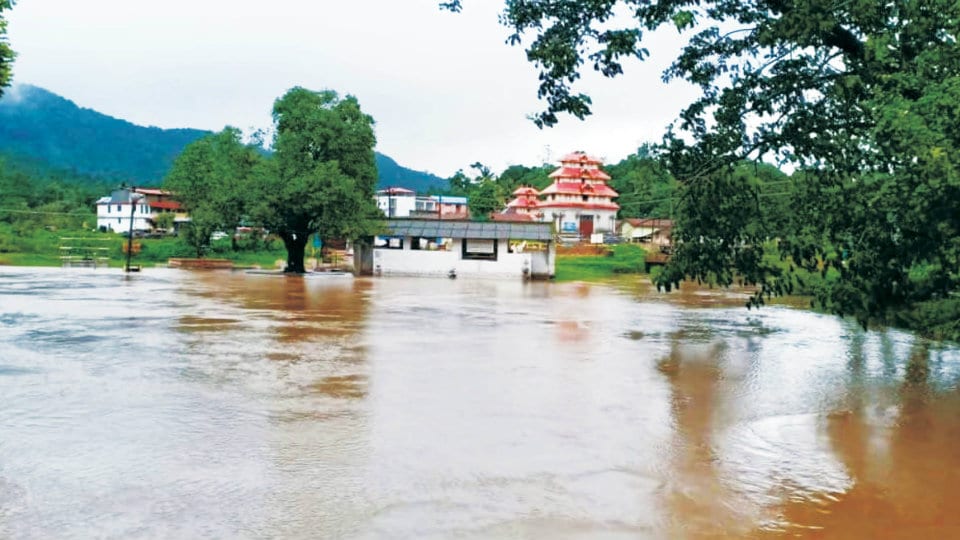 Triveni Sangama at Bhagamandala is nearing submersion; monsoon 54% below normal in Kodagu

Madikeri: After taking an initial long break, the Southwest Monsoon has picked up pace in Kodagu and it has been raining cats and dogs since the last three days. Rains have resulted in inundation of several low-lying areas and overflowing of rivulets and streams.

The Triveni Sangama at Bhagamandala is nearing submersion and the heavy water flow has raised the hopes of a vigorous monsoon that will result in increase in the storage levels of reservoirs in Cauvery Basin — Harangi, Hemavathi and Krishna Raja Sagar (KRS) Dams.

There were incessant showers throughout Friday and Saturday and even on Sunday morning and for the first time since the official onset of monsoon in June, water level at Triveni Sangama at Bhagamandala was on a steady rise. Several roads and paddy fields were inundated and trees were uprooted at many places.

For the first time during the season, low-lying areas were marooned at places where Cauvery flows and the bridge near Bethri that connects Virajpet to Madikeri is likely to be marooned if the rains continue in the same pace.

Though the rainfall deficiency since June is yet to be made up, people are hoping to start agricultural activities in a day or two. Normally, Southwest Monsoon sets in Kodagu in the first week of June as the rain hits Kerala first. This year, however, there were no rains, thanks to a couple of cyclones that swept away rain clouds in the peninsular part of the country.

The catchment area of Cauvery continued to receive heavy rains for the second consecutive day and Bhagamandala recorded a high of 117 mm of rainfall. The other places with heavy to very heavy rainfall were Madikeri taluk (80 mm), Napoklu (74.2 mm), Sampaje (47 mm), Virajpet taluk (83 mm), Hudikeri (44.5 mm), Srimangala (80.8 mm), Ponnampet (70.6 mm) and Shanthalli that recorded 90 mm of rainfall on Saturday. The rainfall in the area was heavy even on Friday and Bhagamandala had recorded 101.2 mm, while Srimangala received 38 mm and Shanthalli recorded 43 mm.

The district received 58.17 mm of rainfall during the 24-hour period ending 8.30 am on Saturday and the cumulative rainfall since January is 541.5 mm. The rainfall was widespread and uniform. Madikeri taluk registered 79.55 mm of rainfall, Virajpet received 57.82 mm and Somwarpet recorded 37.13 mm.

With Kodagu district experiencing heavy rains for the last few days, the inflow into the KRS Dam in Srirangapatna taluk of Mandya district has increased since Thursday.

A section of the Madikeri-Mangaluru Road too had developed cracks and the authorities have strengthened the retaining walls and the embankments and have carried out temporary repairs. However, movement of heavy-duty trucks, mainly goods carriers has been banned across the district during monsoon to minimise damage to roads.