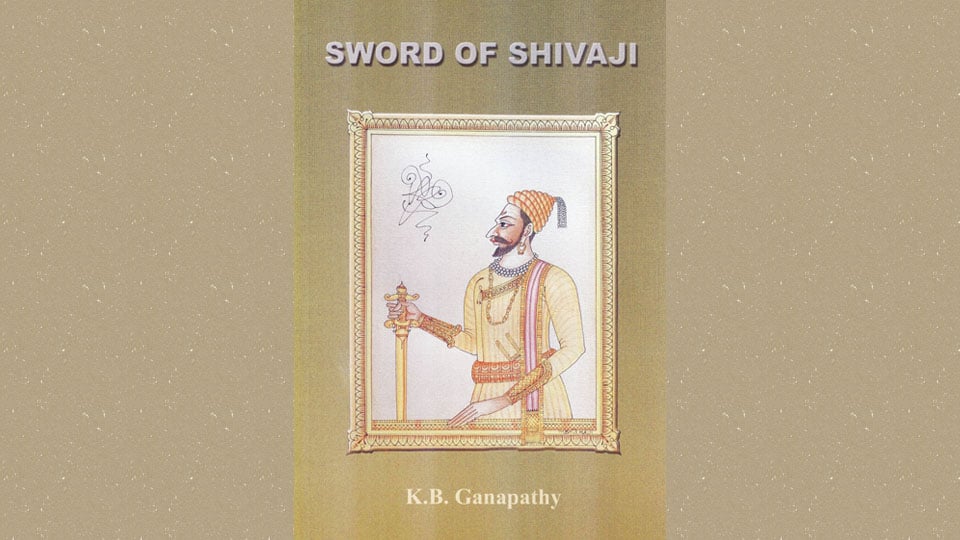 A piece of medieval history well-packaged !

Almost all writers of my acquaintance in Karnataka have come out with one book or a couple of books in Kannada taking advantage of COVID-imposed ‘Agnatavasa’ (quarantine). In a way, it’s a God-send respite for them as they were not pestered by their friends and admirers to preside over this and inaugurate that.  K.B. Ganapathy (KBG), the Founder-Editor of Star of Mysore and Mysuru Mithra, has yoked the pandemic-induced rest, relatively speaking, to pen a petite and elegant book of history, Sword of Shivaji (Published by Samvahana Prakashana, Mysuru).

In fact, it is a collection of articles KBG wrote for his much followed Abracadabra column of Star of Mysore. Therefore, the 17 chapters that have spread over a space of nearly 100 pages — apart from the cryptic and concise Prologue and Epilogue — document the heroic life of Shivaji Maharaj, the great Maratha Emperor, from his birth to his death, chronologically.

KBG has made his sources clear. He is indebted to three books: two in English and one in Kannada: Shivaji, the Grand Rebel (Dennis Kincaid); Shivaji and His Times (Jadunath Sarkar) and ²ªÀbÀvÀæ¥Àw (T.S.  Ramachandra Rao). The author seems to have relied more on Dennis Kincaid’s book rather than the other two as he invokes Kincaid more number of times during the course of his narrative.

On opening the book, we come across a colour photo album pertaining to Shivaji’s life that traces his association with his parents, his teacher, his encounter with Aurangzeb and so on. The artist’s creation of Shivaji’s physical appearance on the cover-page by the noted Ganjifa artist Raghupathi Bhat satisfies the connoisseur’s expectation so much so that the picture exudes the majesty and regality of Shivaji.

The Mediaeval India was a period enveloped by the Mughals in Delhi and Sultans in the Deccan. KBG telescopes the Vijayanagar Empire in 1565 and the arrival of Shivaji Maharaj in 1646. Accordingly, Shivaji’s grandfather, Maloji, was supplying swords to Sultan of Ahmednagar and was also serving as a courtier. Shivaji’s father Shahaji too joined the service of the Sultan of Ahmednagar.

Shivaji’s bravery is seen from a young age. When his father bows before the Sultan of Bijapur, Shivaji who had accompanied his father to the durbar, simply greets the Sultan with a Maratha Salaam. Shivaji was only 13 at that time. Dadaji Kondadev was appointed as Shivaji’s teacher.

What has prompted this reflection is KBG’s grasp of history right from Alexander’s time till the attainment of freedom in the twentieth-century. He rightly asks: Had Porus been supported by Hindu kings, Alexander could not have succeeded in his conquest and this malaise has gripped the Hindu kings at the crucial moments of Indian history so that the Muslim kings and the Christian colonialists were enabled to subjugate the Indians despite the numerical strength of the latter.

KBG’s succinct narration traces how Shivaji the Boy became Shivaji the King. We learn that Shivaji adopted all the accepted strategy of a future ruler to enhance his wealth and resources.

We are given the locations in Karnataka where Shivaji’s father Shahaji moved about. For instance, the author says that Shahaji’s tomb can be located at a place called Hodigere in Shivamogga district.  Also, Shivaji was in Bengaluru for some time when he was aged 9, etc.

KBG’s narration brings to our attention Aurangzeb’s idle son Muazzam who whiled away his time in hunting and playing polo. Aurangzeb’s favourite sister was Roshnara — the name of the late Field Marshal K.M. Cariappa’s bungalow in Madikeri.

Shivaji going to Surat in 1663 disguised as a beggar to understand the geography of the place for future campaign, reminds us of the great Ulysses of the Greek epic. After the Trojan war, Ulysses visits his Palace in Ithaca in the guise of a beggar and quells the marauding suitors of his wife, who was warding off their overtures, waiting for her husband’s arrival.

Chapter eleven is devoted to the elaborate description of Aurangzeb’s durbar and how the high officers performed Taslim, a particular kind of salute, reserved only to the Emperor. But Shivaji does his Maratha Salute. That was enough for Aurangzeb to imprison Shivaji.

The next chapter brings alive the great escape of Shivaji from the prison relishing which the world has applauded Shivaji’s courage and sagacity down the centuries. When Shivaji appeared along with his son Sambhaji, there was a great celebration in the Maratha country. Shivaji took over the administration from his mother. KBG has given us a glimpse of Shivaji’s administration as he blossoms into a full-fledged king.

Referring to Shivaji’s method of levying land tax to farmers the author says: “I guess today’s experts who levy agricultural taxes would be wiser if they read the details of what Shivaji did in this regard in the 17th century.” (p-74)

READ ALSO  What Next? For those who are at career crossroads

The author becomes nostalgic when he recalls that under Emperor Ashoka there was a council of nine Ministers who were called Navaratnas.  Shivaji’s council consisted of eight Ministers. Somehow, it escapes KBG’s attention as he could have called them the Ashtadikpalakas.

KBG’s narration dwells on the last days of the hero preparing the reader’s mind for accepting the inevitable. When Shivaji won back all his lost forts, a grand coronation ceremony was performed. This was on 6th June 1674. Shivaji’s mother, Jijabai, witnessed this and she had a sense of fulfilment. She was past 80 years. She fell ill and passed away within five days after that.

As the book ends, we realise that Shivaji’s life came a full circle, in the sense that after winning Bijapur some sadness overtook him instead of being jubilant and triumphant. He wrote a letter to his Spiritual Guru Ramdas in which he said, “It would be good if God called me to his feet. I cannot bear being separated from my mother any longer.” (p-91)

Shivaji died in April 1680, aged about 50 or 52. This is half a life, according to the time-honoured span of human existence allowed on this earth (The blessed ones go even beyond the Shatamanam). But, Shivaji, like all great Sadhakas of the world, crammed so much good work into this apparently limited temporal framework  that it has the richness and plenitude of a full life.

Prof. A.V. Narasimha Murthy’s brief, but scholarly Foreword, has captured the essence of the book when it says, “The merit of this book which is different from a historian’s perspective and precisely for the same reason it is interesting.” KBG has quite appropriately dedicated the work to his revered mother “Kalyatanda B. Muthavva, who first narrated to me about the bravery, valour and adventurous life of Chhatrapati Shivaji Maharaj.”

As a teacher of English, I may be permitted to end this free-wheeling review, by bringing to the kind notice of the readers, that we are aware of the handicap experienced by our College and University students regarding English language; they stuff their minds with so much trivial information about Cinema, TV Serials, Cricket and other things that they have very little patience for good reading. Why don’t they read books like Sword of Shivaji and enhance their vocabulary and writing skills.  This book should surely figure in their general reading list. How many teachers will read, in the first place, and, in turn, recommend it to their students — I have my own doubts. Thank you KBG for this small and scintillating book. Give us more!