Home » Columns » A Statesman and a Survivor 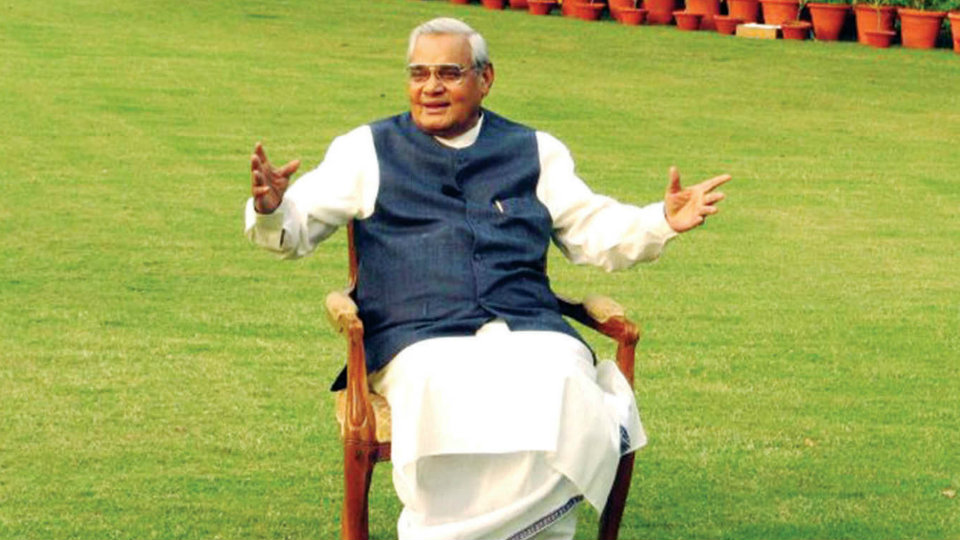 A Statesman and a Survivor

Vajpayee is gone and everyone has good things to say about him, even the Opposition. He was the first Prime Minister with no connection to the Congress and coincidentally, it was Jawaharlal Nehru, India’s first Prime Minister who, impressed with Vajpayee’s oratory skills, said in 1957: “This young man will one day become the country’s Prime Minister.” It came true after 39 years.

For many of us who witnessed Vajpayee’s Prime Ministership have many memories. We are reminded of mesmerising speeches and a growing pride in being Indian, thanks to Pokhran nuclear test, a moment that made India noticed globally which led to the Indo-US nuclear deal. It was also the moment when the nation was introduced to the much-loved former President Dr. A.P.J. Abdul Kalam.

We also witnessed Vajpayee’s bus ride to Lahore and Pakistan’s betrayal with incursion into Kargil. We remember the hijacking of IC-814 when the Vajpayee government released three terrorists to save 176 passengers. We remember how one of the released terrorists later went on to form Jaish-e-Mohammed which attacked Indian Parliament.

More importantly we remember how Vajpayee did not overturn or deviate from the economic model that the previous Congress government had begun.

Even though Vajpayee was from RSS and constantly took on Nehru, it was never vitriolic. In fact, when he became the Foreign Minister in late 70s under Morarji Desai, he noticed that Nehru’s picture had been removed from the corridors of South Block. He then asked one of the officers where the portrait went. Though Vajpayee did not get a reply, Nehru’s portrait was restored.

Similarly, he thanked Rajiv Gandhi for saving his life by putting him in a delegation that went to New York where Vajpayee got a kidney transplant.  Can today’s BJP and Congress be this courteous? But…

Vajpayee was a Statesman and also a survivor. Once Vajpayee told Pandit Nehru, “You have a split personality; you are at once both Churchill and Chamberlain.”  But was Vajpayee too suffering from the same problem?

We have to ask this question because, while he was an RSS man, he did not live like one. He lived with a lady throughout his life. Not as husband and wife but as friends. He even enjoyed his drink. According to BJP MP Dr. Subramanian Swamy, once Morarji Desai called Vajpayee and warned him about his drinking. Would this Vajpayee appeal to some of today’s fanatic right-wing minds?

While he was a gentleman, he played his politics well. From managing his survival in Morarji government to staying away from the Babri Masjid spotlight and letting L.K. Advani take the heat. In fact, he beat Advani to the PM’s seat because of his non-aggressiveness.

After the Babri episode, the BJP wanted to form a coalition and Advani was too tainted to be acceptable to other parties, so they chose what they called the ‘healing face’ or the ‘Saffron Nehru’ — Vajpayee.  NDA was formed and in 1998, it came to power.

Vajpayee had managed to be loved across party lines, managed to be non-vocal on Babri issue and still managed to be the PM from a party that was seen as being extremist ! That’s political mastery.

There is an interesting anecdote in the book “Inhaling the Mahatma” written by Australian journalist Christopher Kremmer where he says that Vajpayee was called “The Mask” by his own party colleagues and mentions an incident.

In 1993, a man named Satish Pandey hijacked a plane going from Lucknow to Delhi with 48 people on-board. He held two hand-grenades and demanded the release of people arrested during the Babri Masjid demolition. Finally by the time the plane landed back in Lucknow, his only demand was that he would surrender if Vajpayee came. Vajpayee did come and Satish surrendered. He also surrendered his hand grenades — they were two thick balls of paper !

Christopher Kremmer, who was also on this flight, met Satish Pandey four years later when he was out on bail to ask him why he hijacked the plane. Here is the excerpt: Satish said, “What I did was noticed in high places”.  Noticed yes but hasn’t Mr. Vajpayee publicly scolded you for using wrong methods. Satish smiled slyly and in a sage tone that suggested I ought to know better, answered, “Atal ji has to talk like that. He’s a politician. He doesn’t need to promise to liberate other Hindu sites. People like me will take care of that.” With that he got up to relieve himself.

Kremmer continues: When he returned to the courtyard, Satish was holding a folded piece of paper which he duly presented to me. It was his trump card, a letter typed in English on the official letter head of the Leader of the Opposition in Parliament, Atal Bihari Vajpayee. Dated 27th June 1996, three years after the hijacking, it was a personally signed letter of condolence to Satish on the death of his father.  I was stunned. Looking up from the letter in disbelief I saw Satish nodding and smiling at me. He was right about the difference between a politician’s public position and his private feelings.

Vajpayee may have been a shrewd politician and a political survivor with liberal views in a right wing party but he was the face of soft politics and cultured behaviour.

He spent much of his time sitting in the Opposition. During this time he got his point across with facts, humility, emotion, words and wit. Unlike today where debate in Parliament is made using lies, arrogance, anger, hugs and winks.

4 COMMENTS ON THIS POST To “A Statesman and a Survivor”