Home » Columns » A Tree in Malgudi 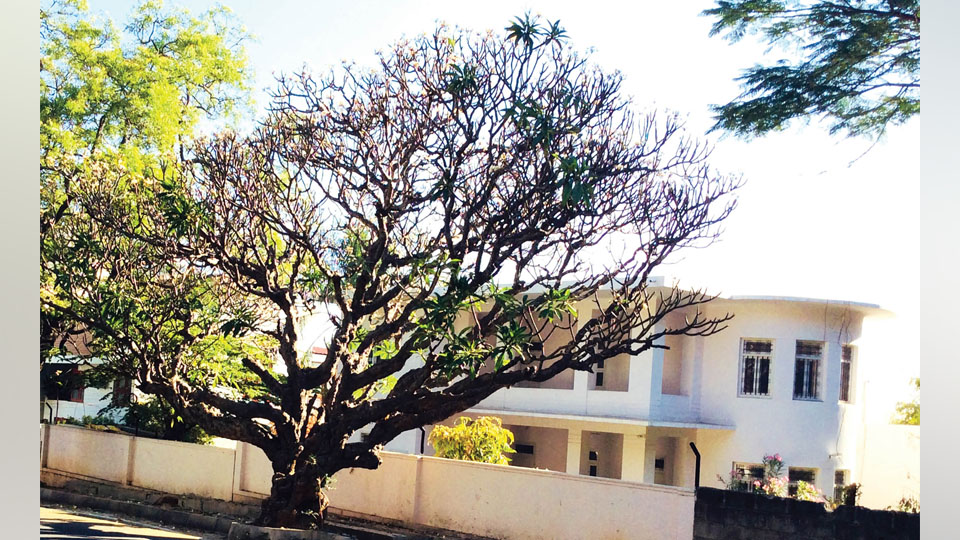 A Tree in Malgudi

Spring in Mysuru brings jewel-like flowers to the leafless, stumpy branches of the Frangipani trees after the cold season. The flowers usually have five white petals around a heart of gold. Some blooms are pale yellow set off by a magenta centre, or white deepening to pink; all are lovely and delicately fragrant.

“Plumeria” or “Frangipani” is the horticultural name; colloquially it is the “Temple Tree.” In North India, it is called “Champa.” I love the Kannada name I knew as a child, “Devaganigile.”  It evokes memories of processions of women walking along the roads long ago in Mysuru’s Vontikoppal during religious rites for the Goddess Chamundeshwari or Mariamma. They carried on their heads salvers of a sweet called “Thambittu,” made with rice flour and jaggery. It was decorated with Frangipani blooms threaded on fine skewers. Sometimes a circular woven disc of bamboo [“Simbi”] under the tray helped to steady it. More often the pallu of the sari was worn long. After covering the head, the slack was twisted into a rope-like shape to balance the load.  They sang a song with the refrain of “Thambittu, Thambittu.” They were led by musicians playing the “Volaga” [pipes and drums]. This festival is still an annual event in Vontikoppal, celebrated as “Nada Habba.” The decorations feature the traditional “Chapra” or arches. In addition, there are twinkling fairy lights and music on loudspeakers. One misses the soft voices of the women. 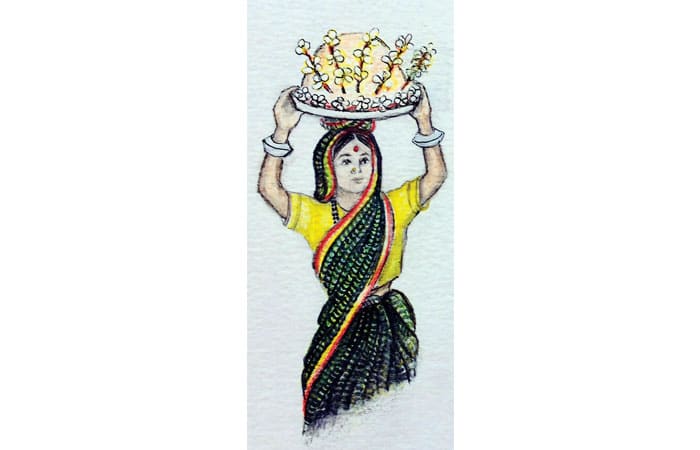 In Yadavagiri, the home of Malgudi Days writer R.K. Narayan (RKN) is now a memorial. A gentle Dalmatian dog can be seen at the gate. The author himself, according to acquaintances, did not have a dog and avoided the pets he met on his walk. 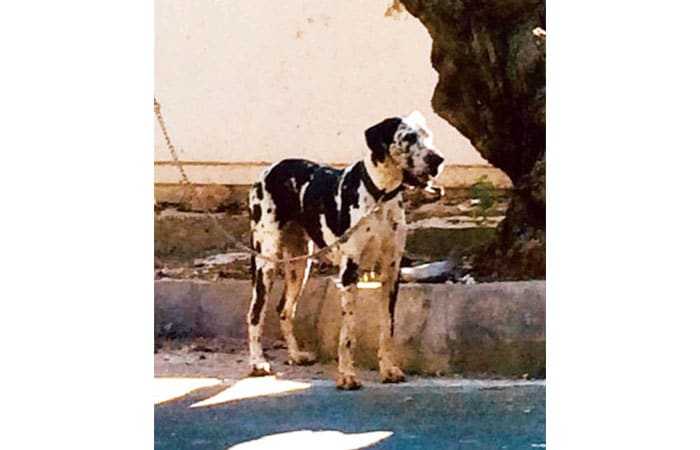 Dalmatian dog at the RKN Memorial.

Just outside the garden wall stands the old Frangipani tree.  It was there decades ago, before the houses came up all around. There was no tarred road, just a beaten track. The stony ground sloped downward to the Railway track leading to Srirangapatna and beyond. The twin minarets of the mosque there could be seen in the distance. Steam engines rumbled along the rails, belching smoke, their shrill whistles dying away. On the other side of the Railway track stood a clump of trees with dense foliage, a crematorium. The “Jodi Thenginamara” crematorium has been modernised and is hidden now by buildings. As a child I remember the fiery eye of a burning pyre between the dark tree boles; or puffs of smoke billowing over the tree tops.

The trunk of the RKN tree is gnarled, with circular scars where branches were lopped off.  In the flowering season, very few leaves appear at first, mainly new blossoms on fresh sprigs, like an elderly woman wearing precious jewellery. In olden days trees like this were considered sacred and lamps were lit to them.

In the 1960s, my mother Mukta Venkatesh liked to wander about Yadavagiri with her painting gear to sketch on the spot. R.K. Narayan was an honoured resident there. His blue Mercedes, the only one in the city then, was a familiar sight on the main road; he was respectfully saluted on his morning walks.

Mukta settled down near the Frangipani tree to paint the convoluted bark and some flowers. The watchman of the house was puzzled by this unconventional activity and roughly told her to move along. Mukta pointed out that she was on the roadside, causing no trouble. Hearing the altercation, the author himself came out. He jokingly told her that she could continue to paint if she would give the picture to him. Mukta retorted, “I will give you the painting if you dedicate your next book to me!” The picture was finished in three sittings and hangs on a wall in our home. 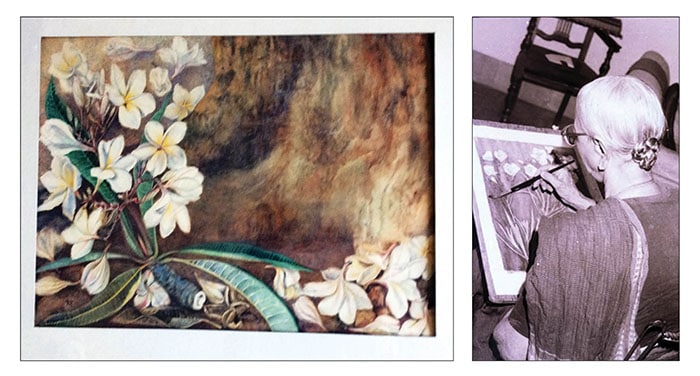 Painting by Mukta Venkatesh; Pic Right- A file photo of Mukta at work.

Mukta had interacted with R. K. Narayan’s family in the early years when they had lived as neighbours in Lakshmipuram in old Mysuru. She knew his mother well and respected her for her sharp wit, powers of observation and as a raconteur of interesting stories. RKN himself admired this ability in his mother and said that he drew inspiration from her. In later years, Mukta became close to his daughter Hema.  She was about my age and was my friend too. Sadly, Hema passed away at an early age.

READ ALSO  Legendary English Novelist of our City: R.K. Narayan as a Mind-Changer !

Recently some trees were cut in a site to be developed, including a lovely Frangipani. I was not the sole mourner. For some days plangent bird cries haunted the area; a pair of grey hornbills had lost their nest in one of the trees. The old Frangipani is a symbol of the veneration we once had for trees. Hopefully, it will survive to complete its life span, representing continuity in changing times.

2 COMMENTS ON THIS POST To “A Tree in Malgudi”