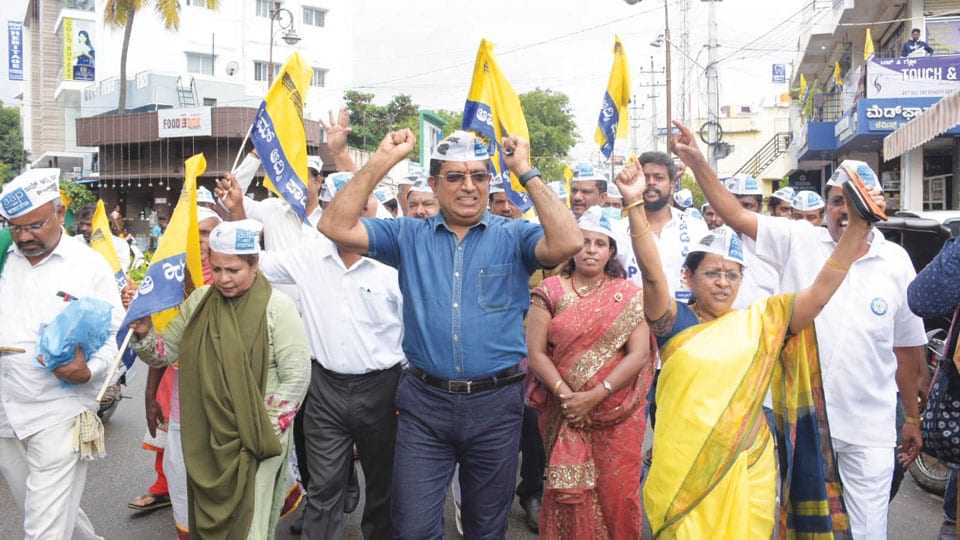 Party workers take out padayatra as part of membership campaign

Mysore/Mysuru: Aam Aadmi Party (AAP) State Vice-President and former IPS Officer Bhaskar Rao has called upon party workers to work hard for strengthening the party in an organised manner. He was speaking after inaugurating the Party’s new office near Chamundipuram Circle here on Thursday.

Asserting that there is no place for mere time-spenders in the party, Bhaskar Rao, who had also served as Mysuru City Police Commissioner 15 years ago, said that the people were fed up with the misrule of Congress, BJP and JD(S) and that AAP is the only hope for the common man.

Bemoaning that party organisation in Mysuru is not up to the mark, he stressed on the need for the party workers to shun their prestige and work for the party.

In order to test the political knowledge of party workers, Bhaskar Rao questioned how many Assembly Constituencies are there in Mysuru, when some said six. A perplexed Rao asked to name the six Constituencies, when there was no response. Ultimately, the party leaders on stage read out the names of the four city Assembly segments, including Chamundeshwari.

Senior AAP leader Padma said that the party activities began in Mysuru in 2013, when only a handful of members were there. But now AAP has hundreds of members and thousands more are expected to join the party in coming days, she said adding that many leaders from other parties are willing to join AAP. The party is gearing up for next year’s Assembly polls, she added.

Later, a party meeting was held at Aradhya Bhavan on JLB road. Earlier, the party workers took out a padayatra in Chamundipuram, Vidyaranyapuram and JLB road as part of membership campaign.