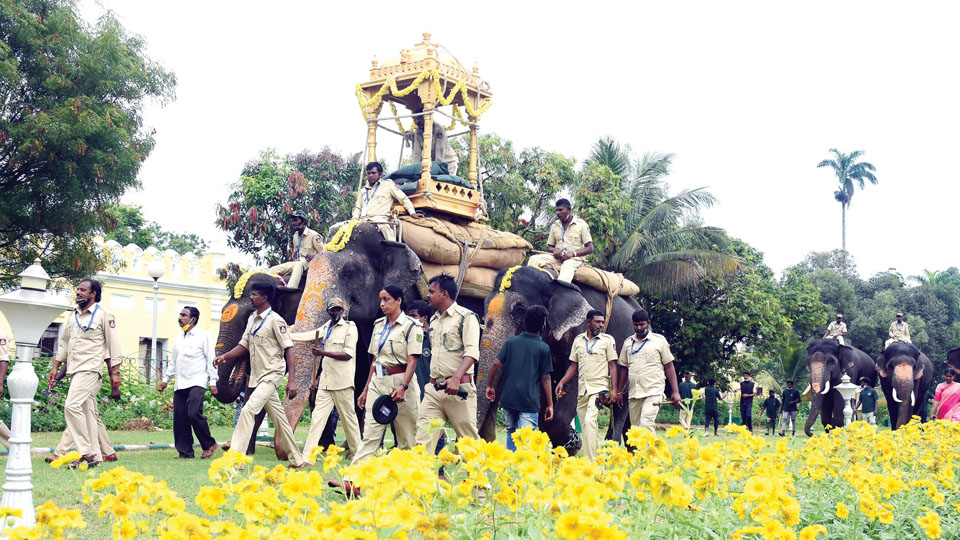 Sumptuous breakfast for over 300 elephant handlers, followers of politicians, media

Mysore/Mysuru: The till now medium-pace Dasara preparations got a fillip this morning with a host of activities seeing the light of the day starting from breakfast to mahouts and kavadis as a friendly gesture, assembling of the Golden Throne inside the Durbar Hall, mounting of wooden Ambari on Howdah Elephant Abhimanyu, inauguration of the Dasara website https://mysoredasara.gov.in/ and also announcement of cultural programme dates and performers.

While the assembling of the Golden Throne was not open for public and the media as it has been a tradition that has been followed since years, other inaugurations were rather crowded with the events led by Mysuru District Minister S.T. Somashekar and a host of elected representatives.

Over 300 persons comprising elephant handlers, mahouts, kavadis, assistants, Forest Department staff and officials, media and the followers of Ministers, MLAs and heads of Boards and Corporations had sumptuous breakfast in the premises of Mysore Palace. The meal was dished out by Mysore Palace Board and consisted of idli, vada, dosa, halwa and khara pongal.

After serving breakfast himself, Somashekar and other elected representatives ate breakfast and proceeded to the place where the wooden howdah was mounted on Abhimanyu who carried it effortlessly and walked for over 45-minutes conveying the message that he is still a champion.

Today was the first day when the wooden howdah was mounted on Abhimanyu for this year’s celebrations. Deputy Conservator of Forests Dr. V. Karikalan clarified to Star of Mysore that the wooden art work weighs exactly 280 kgs. Minor variations in the weight are observed when painted and polished but the actual weight is 280 kg. To carry the wooden Ambari, sandbags weighing 300 kg were mounted on top of the tusker.

As this is a sacred practice, Tula Lagna between 9.25 am and 10.15 am was chosen to perform pujas and the howdah was mounted with the help of a manually-operated crane. A six-member team was appointed for the task and no one was allowed near the place. The number of people who mounted the Ambari was restricted so as to prevent unnecessary noise and confusion with each person giving his own suggestions.

Also, the crowds were warned not to shout or clap once the Ambari is lifted and carried by Abhimanyu. After the successful mounting, Abhimanyu, accompanied by kumki elephant Chaitra and Cauvery, walked around the Palace fortress for about 45 minutes. Before this, Minister Somashekar showered flower petals on Abhimanyu.

The crane was mounted near the designated place next to the residence of the royal family and Abhimanyu was made to salute one side of the house where usually, Pramoda Devi Wadiyar watches from a window the Golden Howdah mounting on the Vijayadashami day.