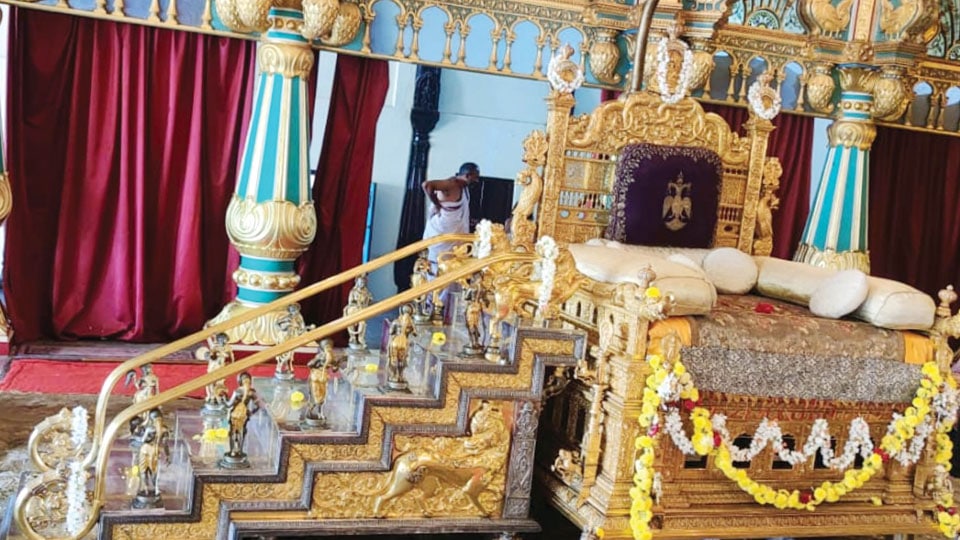 Mysore/Mysuru: The gem-studded Golden Throne (Suvarna Simhasana) was assembled this morning at the Durbar Hall inside iconic Mysore Palace with all the accompanying rituals. Along with the Golden Throne, the Silver Bhadrasana was assembled at the Kannadi Thotti.

This is one of the major attractions during Navarathri celebrations and the Khas Durbar or the Private Durbar will be performed by titular head of erstwhile Mysore Royal Family Yaduveer Krishnadatta Chamaraja Wadiyar. But the Golden Throne will not be kept for public display this time and the tourists have to be content with file images and videos.

As part of this ritual, the Pattada Aane (elephant), Pattada Kudure (horse) and Pattada Hasu (cow), all adorned with royal cloth, were also brought and pujas performed. In all, there are 14 parts to the throne that includes the steps leading to the throne, golden umbrella, main seat with cushions, arms rest to name a few. About 20 members of Palace staff assembled them.

Usually artisans from Gejjagalli village in Nanjangud assemble the throne, but this time, none of them were invited for the procedure and only the Palace staff did the job, giving a go-by to the tradition.