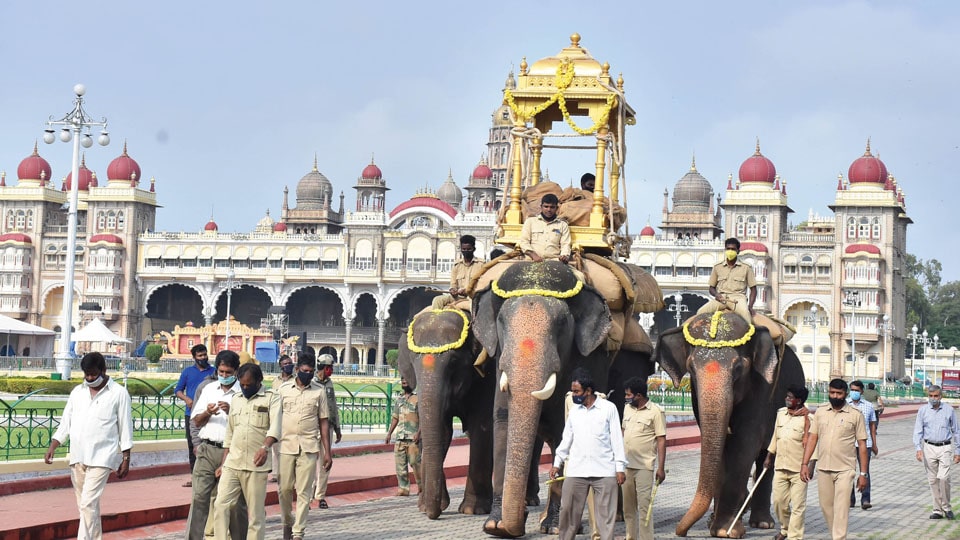 Mysore/Mysuru: Fearless Abhimanyu, who is given the responsibility of carrying the whooping 750 kg Golden Howdah during Jumboo Savari, rehearsed with the wooden howdah today carrying a total weight of 600 kg.

Accompanied by Kumki elephants Kaveri and Vijaya, Abhimanyu walked with ease in the Palace premises via Jayamarthanda Gate, Kodi Someshwaraswamy Temple and Varahaswamy Temple before reaching the starting point of the Jumboo Savari, where he saluted.

Earlier, puja was performed to the crane near the residence of royal family and the wooden howdah was mounted on the back of Abhimanyu. First, Gaadhi-Namdha (a cushion-like material) was fastened on Abhimanyu’s back on which the wooden howdah, weighing 350 kg, was placed and secured with ropes. Sand bags weighing 250 kg was also placed to bring the weight to 600 kgs. This was done to get Abhimanyu acclimatised carrying the weight of the Golden Howdah which is 750 kg. From tomorrow, Abhimanyu will be made to carry 750 kg till the day before Ayudha Puja.

Deputy Conservator of Forests (DCF) M.G. Alexander, Range Forest Officer (RFO) K. Surendra and others were present during the rehearsal.