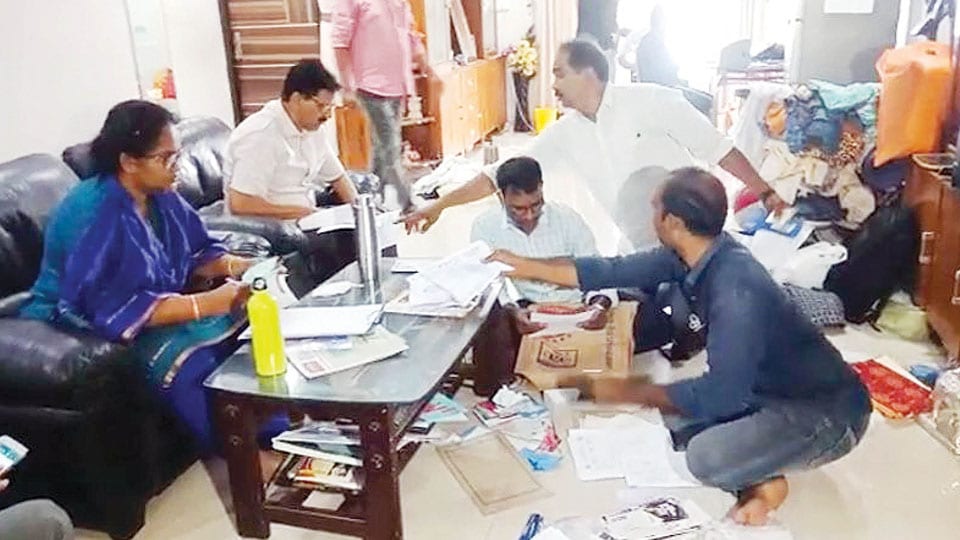 Mysuru/Bengaluru: In a massive pre-dawn swoop, Anti-Corruption Bureau (ACB) sleuths conducted raids at the residences and offices of nine Government officials across Karnataka including Mysuru, Bengaluru, Belagavi, Chikkaballapura and Yadgir.

As per initial reports, cash, jewellery, expensive watches and gold utensils have been found in the raids conducted in  Mysuru. However, ACB sources are tight-lipped about the exact value of the seizures and said the details of movable and immovable properties would be revealed later.

As many as 52 teams headed by jurisdictional Superintendents of Police (SPs) and Deputy Commissioners of Police (DCPs) are carrying out raids at 28 places. The officials under the scanner from Mysuru are K.M. Munigopal Raju, Superintending Engineer, Chamundeshwari Electricity Supply Corporation (CESC), Channaveerappa, First Division Assistant (FDA) in RTO Office, Lakshmipuram and Subramanya K. Vaddar, Joint Director, Town and Country Planning.

In Mysuru, raids began as early as 6 am and teams from Mysuru, Bengaluru, Chamarajanagar and Mandya are involved in the operation. The raiding teams arrived in city yesterday and stayed in several lodges as tourists on a sight-seeing visit. In the coordinated raids, teams arrived in vehicles and knocked at the doors of the houses at 6 am and the offices were raided after 10 am.

Munigopal Raju’s house at Gokulam, office at Kuvempunagar and his native place at Kanakapura in Ramanagara district were raided simultaneously by the team headed by ACP SP Southern Range Arunangshu Giri. Officer Channaveerappa’s house at Kuvempunagar in Mandya, RTO Office at Lakshmipuram in Mysuru and native place at Halakere village in Mandya and his mother’s house at Vijayanagar Third Stage were also raided by Arunangshu Giri’s team.

Raids are going on even at the residences of their relatives, said an ACB official.