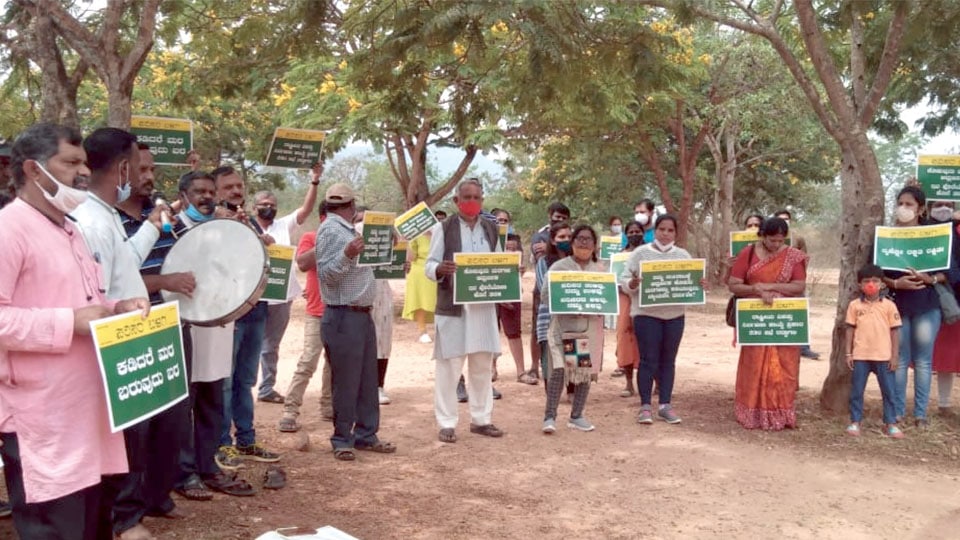 Activists stage demonstration against felling of trees for Heli-Tourism

Mysore/Mysuru: Strongly opposing the Tourism Department’s plans to fell trees for building Heli-Terminal near Lalitha Mahal Palace as part of Heli-Tourism project, over 50 activists under the banner of Parisara Balaga staged a demonstration in front of Lalitha Mahal grounds this morning in protest against the felling of trees.

Holding placards that carried messages on the need for  saving our ecology and environs, the protestors maintained that an unfeasible and unsustainable Heli-Tourism project was not necessary for the city, which has a vast green cover.

Ridiculing the Forest Department’s moves to fell down a big number of  fully grown trees in the area  for facilitating the construction of Heli-Terminal, they said that saving trees was the need of the hour and not their destruction.

Maintaining that every citizen of Mysuru has the responsibility of saving our green cover, which is vital in the backdrop of climate change, they declared that they will not allow the Government to cut down trees come what may. They urged the Government to shift the Heli-Tourism project elsewhere, if it was too keen on it.

Prof. Kalachannegowda, Parashuramegowda and others took part in the protest.