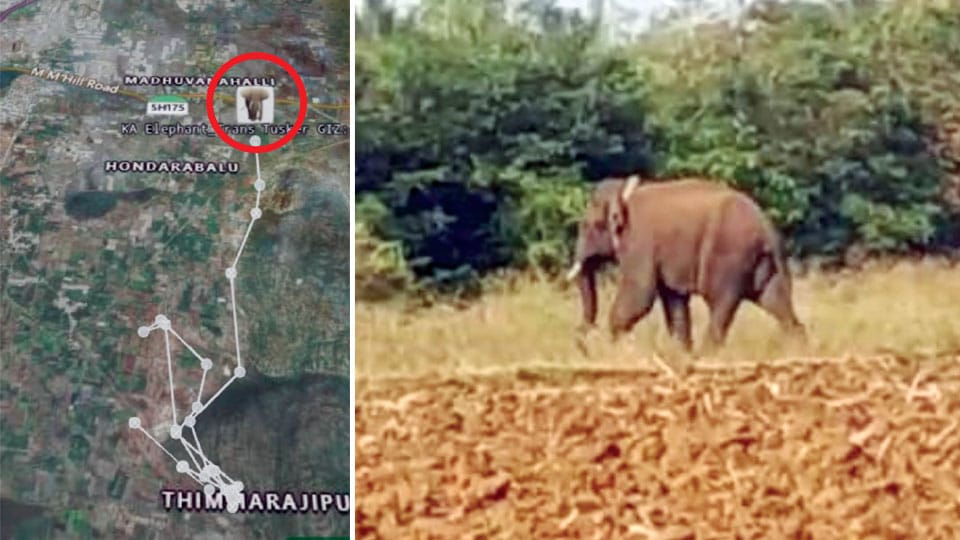 In the Chamarajanagar-Male Mahadeshwara-Hassan-Kodagu belt alone, seven select elephants have been radio-collared and their movements are being regularly tracked and monitored since the last three months. These sophisticated collars contain advanced GPS satellite tracking devices that allow scientists to monitor, in real time, when and where individual animals are moving.

That information is used to chart their vast habitat, which helps researchers identify and manage essential wildlife corridors. Officials said that though the collaring process is both labour-intensive and expensive, the effort is worth the payoff. By revealing whether an elephant is active, stationary, or injured, the collars enable rangers to respond more quickly and effectively to poaching incidents and human-elephant conflicts, they said.

The radio-collaring team will have tranquillising experts, vets and local forest guards and officers who are familiar with the terrain. The team will use Kumki (captive and trained) elephants. The first job will be to reach the exact location of the herd and observe the female leader — usually the largest and the strongest in the group.

The Kumkis will infiltrate the herd and scatter the elephants. When the female leader is isolated, the experts perched on the nearest Kumki elephant will shoot her with darts loaded with a tranquillising drug. The dosage will be decided according to the size and strength of the matriarch. The effect of the drug will last for 30 minutes. After being hit, the elephant will walk like it is intoxicated for 10 minutes and then it will fall asleep. So, the team has a 20-minute window to put the radio collar on the elephant.

READ ALSO  Preparations on for Kumaraswamy’s visits to offer Bagina at Harangi, KRS

Each radio collar weighs 10 kg and costs about Rs. 3 lakh. The GPS-enabled radio collars will provide updates in real time about the location of a herd and help track them within the State as well as during migration. A tool embedded in the collar will send signals 24×7, said V. Yedukondalu, Deputy Conservator of Forests (DCF) Male Mahadeshwara Wildlife Sanctuary. “Those who have taken master controls of the radio-collar signals can share the password with 5-6 members after fixing the signals,” he added.

Interestingly, after the radio collars have been fixed on the elephants, it has been found that each herd travels between 50 and 100 kilometres per day. Wild elephants are radio-collared using satellite collars and Very High Frequency (VHF) collars soon to keep a track of their movements and drive them back to forests in case of any imminent conflict.

Earlier, such exercises were taken up mostly for solitary elephants, commonly known as loners. But this time, the Department is radio-collaring elephants from herds. The move will help officials get an idea about an entire herd’s movement and accordingly, the Department takes steps to mitigate conflicts. Villagers and ground-level staff are alerted about the herds’ movements. The radio-collar signals can be accessed from a computer or a smart phone.

A lone tusker, roaming in villages on the border of the forest in Hanur and Kollegal Taluks of Chamarajanagar District had created panic among the people two days back (Friday). Department officials had found that the elephant had a radio collar around its neck and it was suspected that the tusker might have strayed from Tamil Nadu.

The jumbo had strayed on farmlands at Sathegala, Dhanagere, Gundal, Anjaneyapura, Uganiapalya and several places in Kollegal taluk, destroying sugarcane and paddy crops. People were even scared of venturing out of their homes. Tracking the radio collar signals, it was found that the elephant belonged to Karnataka and has been radio-collared by Karnataka Forest Department.

Biligiri Ranganatha Swamy Tiger Reserve Range Forest Officer Mahadevaiah said that the 35-year-old jumbo was radio-collared three months ago for study purposes at Ramapura Wildlife range. “It is the same jumbo and we have authentic information about its movement. It is within the forest area and chances of it venturing back into villages look slim. It was at Bandalli and Kothanuru on Friday and it has moved near Gundal reservoir and Palya region,” he added.