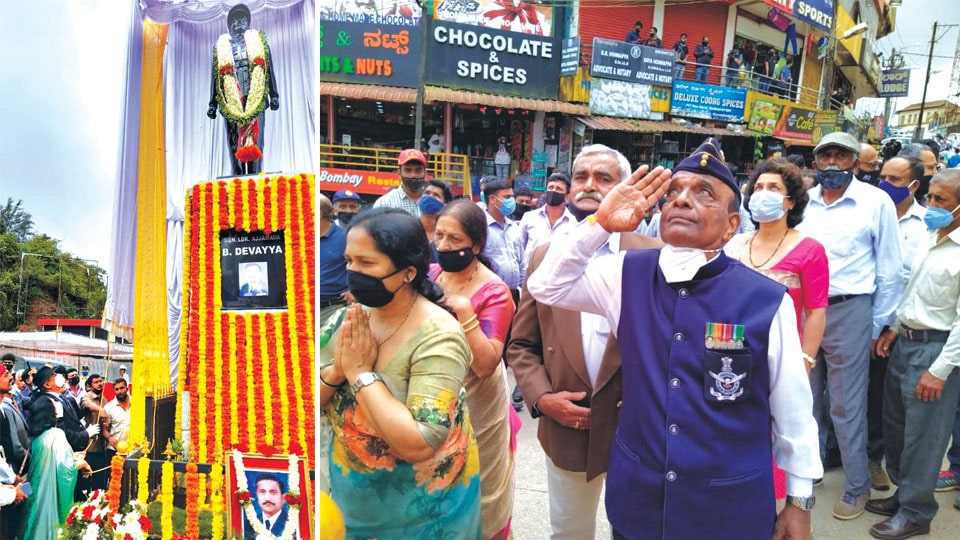 Ex-Sergeant Deranna Gowda, who handed over a pistol to A.B. Devayya, shares his experience

Madikeri: The bronze statue of Squadron Leader Ajjamada Bopayya Devayya was unveiled at Madikeri in Kodagu district this morning. The 6-feet-9-inch statue has been installed at the Old Private Bus Stand Circle and was unveiled by Air Marshal (Retd.) Kodandera C. Nanda Cariappa today, the day Devayya was martyred 55 years ago. The Circle will henceforth be officially called Squadron Leader Ajjamada B. Devayya Circle.

Squadron Leader A.B. Devayya is the only Indian Air Force (IAF) Officer to be posthumously awarded the Maha Vir Chakra (MVC). During the 1965 India-Pakistan War, Devayya (called ‘Wings of Fire’) was part of a strike mission (on the Pakistani Airbase Sargodha). During the war, Devayya shot down a US-made PAF (Pakistan Air Force) F-104 Starfighter on Sept. 7, 1965 while flying an inferior Mystere of French make.

The bronze statue weighs 600 kg and Rs. 20 lakh has been spent on getting the statue carved at Kengeri near Bengaluru. Devayya’s wife Sundari and daughter Preeth were present during the statue inauguration this morning. Also, ex-Sergeant Deranna Gowda from Sullia, a retired Non-Commissioned Officer, who was present when Devayya was seen off on Sept. 7, 1965 before Devayya took off to the skies, was among the dignitaries.

Sharing his experiences, ex-Sergeant Deranna Gowda said, “When Fourth Pakistani Air Force started bombarding the Jalandhar Air Base, Devayya came to the Armoury to collect his weapons to fight the enemy, I handed him a pistol and strapped the weapon around him. Kudupaje Bhojappa was also present. Later, Devayya sat on Mystere aircraft and took off to the skies.”

Addressing the gathering, Air Marshal Nanda Cariappa, who himself is a war veteran and son of Field Marshal K. M. Cariappa, said that it was a matter of pride for Kodagu as Squadron Leader A.B. Devayya and Major Puttichanda Somaiah Ganapathy (later promoted as Lieutenant Colonel) received the honour of Maha Vir Chakra, next only to the supreme Defence award Param Vir Chakra.

While Devayya received the honour for shooting down a Pakistani plane and martyring for the cause of the Nation, Puttichanda Ganapathy was awarded Maha Vir Chakra for his combat role in 1987 Operation Pawan in Sri Lanka (launched by Indian Peace Keeping Force) against the LTTE.