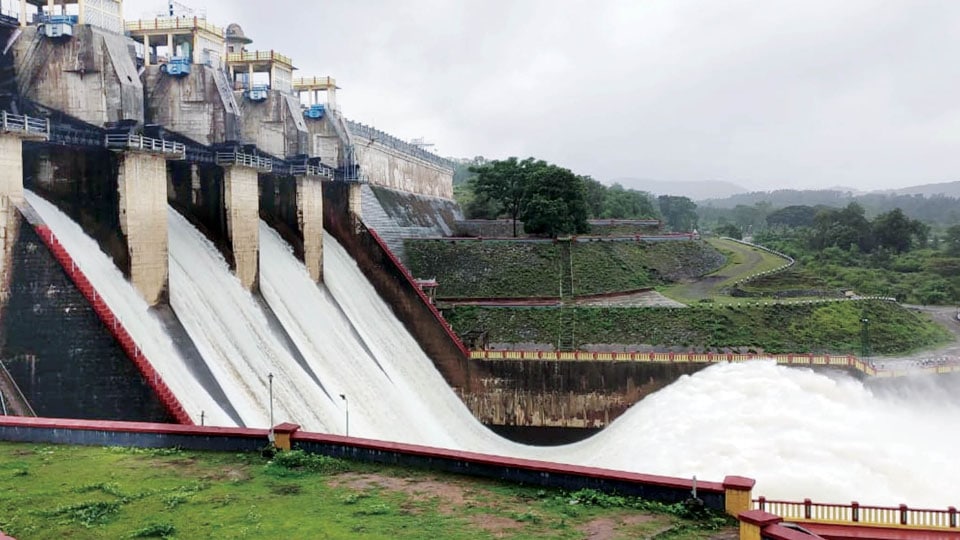 Mysuru: A high alert has been sounded along the downstream of Harangi and Kabini dams in areas such as Periyapatna, K.R. Nagar, Nanjangud and Suttur as thousands of cusecs of water is being released from Harangi and Kabini Reservoirs. Heavy rains in Kodagu have increased the inflow to Harangi, a tributary of Cauvery and Wayanad, the source of Kabini, stepping up the outflow from the dams.

The entire State is reeling under floods as many dams are releasing water to major rivers like Krishna and Cauvery. The Alamatti, Supa, Bhadra, Linganamakki, Gorur, Yagachi, Tungabhadra, Gajanur and Narayanpura dams have been releasing thousands of cusecs of water in addition to the water being released from Koyna Dam in Maharashtra and Pavani Dam in Pune. Most of North Karnataka is flooded and 17 deaths have been reported so far.

Chief Minister B.S. Yediyurappa, the sole man in BJP Government, is camping in North Karnataka following a nudge from the Party High Command and as a result, his Cabinet expansion and the Dasara High Powered Committee meeting that were scheduled to be held today have been postponed.

The rain has brought untold miseries to the people of Kodagu, especially Virajpet and South Kodagu. They are forced to stray put inside their homes and cannot even venture out to buy essential supplies. Several towns, including Gonikoppal, Ponnampet, Kanoor, Balele, Nittoor, Hoddur, Hodavada, Bethri and Murnad, have been cut off as Rivers Cauvery and Lakshmanatheertha are overflowing.

Small rivulets are also overflowing inundating the houses on either side. Water that has been released from Harangi Dam is flooding Kushalnagar and water has entered houses in Sai Layout and surrounding areas. If the outflow increases, the Kushalnagar Cauvery twin bridges will submerge like  last year.

Several ginger fields in a vast expanse of land in Hunsur have been marooned and the crop has turned useless, causing a loss of crores of rupees to the farmers.

As the floodgates are open, the Mysuru District Administration is in full preparedness to face the flood situation. According to a communiqué issued from the Deputy Commissioner’s Office, “high alert has been sounded as 85,000 cusecs of water is being discharged from Kabini. There is a high possibility of Suttur Bridge and surrounding areas of Kapila River at Nanjangud getting submerged.”

Addressing a press conference at his office this morning, DC Abhiram G. Sankar, accompanied by SP C.B. Ryshyanth, said that the Administration is prepared to handle crisis situation arising out of floods.

“Rehabilitation centres will be established for affected people and goshalas will be set up by the respective taluk administrations for livestock. The next three to four days are critical because rain is pounding Kodagu and Wayanad in Kerala,” he said.

Boats ready for use

“Four boats have been readied and have been stationed at Bavali, Nanjangud and two have been kept as standby. Agriculture and Horticulture Departments have been directed to release immediate compensation for crop loss and there is an emergency fund of Rs.12 crore. Each taluk has been given Rs.25 lakh to meet emergency needs,” he said.

More tourists are expected to arrive in Mysuru as there is a series of holidays on account of Varamahalakshmi, Second Saturday, Sunday and Bakrid which falls on Monday. “We will advise tourists not to venture into rivers while visiting temples on the banks of rivers.

Teams from Chamundeshwari Electricity Supply Corporation (CESC), Revenue, Agriculture, Revenue, Horticulture and Tourism Departments have been kept on alert to meet any exigencies, the DC added.