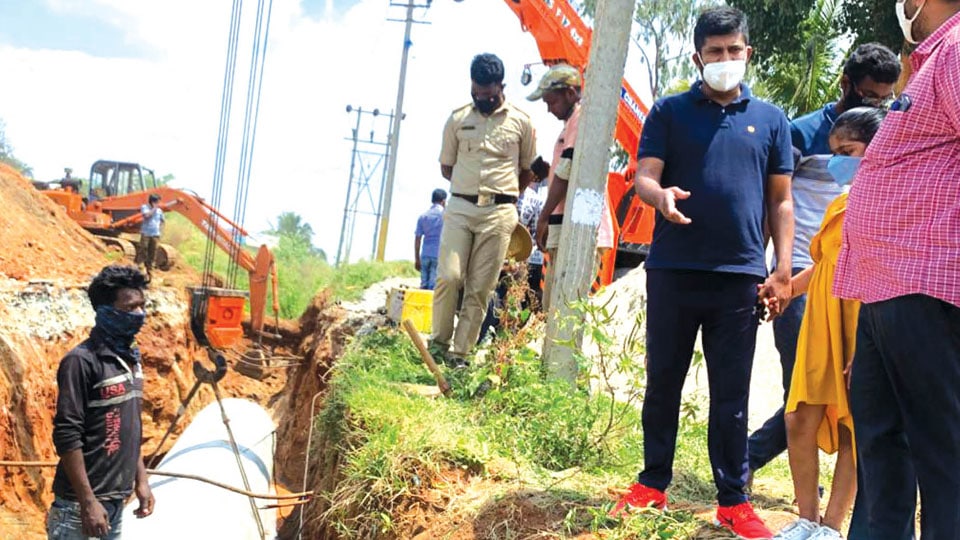 Mysore/Mysuru: The 20-metre pipeline laying works to supply drinking water from Hongalli Pumping Station to Central Service Reservoir at Vijayanagar Second Stage has been completed with the intervention of Mysuru-Kodagu MP Pratap Simha.

The MP who had visited the project site on Sept. 3 had convinced the villagers of Belagola to allow the completion of the pipeline works. He had assured the villagers who had objected to the pipeline-laying works that their demand for their share of water will be fulfilled.

Following the assurance, the villagers relented and permitted the completion of the works. Now the pipeline has been laid and the works were completed yesterday.

As per the demand of the Belagola villagers, a provision of water supply to their village has been made by altering the pipeline works a bit. Now as the water is being supplied to Vijayanagar Central Service Reservoir from Krishna Raja Sagar (KRS) Dam regularly, Belagola villagers too will get their share of water.

The Central Service Reservoir has been constructed under the first package of AMRUT Scheme and can store up to 2 crore 70 lakh litres of water — a first in the State. Yesterday, Pratap Simha visited the pipeline-laying works and thanked the villagers for obliging to his request and letting the project to be completed.

Meanwhile, officers have been blamed for the inordinate delay in the implementation and execution of AMRUT project. Addressing a press conference in city yesterday, former Mayor Purushotham and retired Superintending Engineer of VVWW Nagaraja Murthy alleged that the inefficiency and delaying tactics of the officials have delayed the project, robbing Mysureans of their rightful share of drinking water.

They said that the AMRUT Scheme was approved way back in 2016 and the Package 2 of the project worth Rs. 102 crore was handed over to a Hyderabad-based company. As per the project terms and conditions, it was supposed to be completed in August 2019 as the works began in February 2017.

“Officials from Karnataka Urban Water Supply and Drainage Board have neglected the project implementation. As the project has been delayed and according to the terms and conditions of the contract, a 10 percent liquid damage can be imposed on the company that will force the company to shell out Rs. 11 crore to the Government. But the officials just imposed a fine of Rs. 1 crore and caused loss to the Government,” they said.

The officials have colluded with the Hyderabad-based company to cause a loss to the Government. “All the officials involved are liable for penal action as they have violated the established rules and regulations,” they said.

Both Purushotham and Nagaraja Murthy alleged that when MP Pratap Simha visited the Hongalli Pumping Station and places where AMRUT Scheme is being implemented, officials hid the facts from the MP and did not show him the real picture.

The officials suppressed information about supplying drinking water by showing the MP only the filter bed at Hongalli but did not inform him about impure drinking water being supplied without subjecting the water to backwash process to clean impurities, they alleged.

They also alleged that the AMRUT Scheme is implemented in a shoddy manner without complying with the set standards. “It is surprising that the officials, who could not complete the project since about four years, have assured the MP that they would complete the project within 40 days,” they said demanding action against officials for delaying the project, colluding with the implementing company and also for causing loss to the State Government.