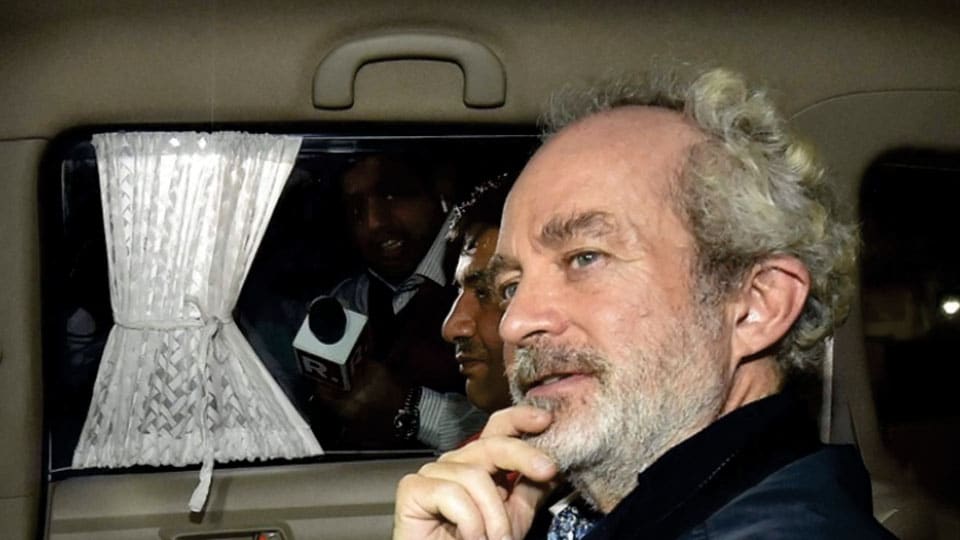 New Delhi: A city Court hearing the Agusta Westland helicopter deal case, yesterday placed curbs on alleged middleman Christian Michel’s access to legal assistance after the Enforcement Directorate (ED) complained that the accused had misused the permission by passing on to his Counsel a paper that contained a set of questions on ‘Mrs. Gandhi’.

The Court extended Michel’s custody for seven more days and restricted his access to Legal Counsel by allowing his lawyers to meet him one at a time, from ‘a distance’ for a maximum of 15 minutes, twice a day.

Earlier, moving its plea for extension of Michel’s custody, the ED said, at about 5 pm on Dec.27, when a medical team had come to conduct a mandatory check-up, the accused had quietly slipped a note to Counsel Aljo Joseph while ostensibly shaking his hand.

A Deputy Director of the agency, who had been recording Michel’s statement, noticed the incident and asked Joseph to give the piece of paper back.

The ED officials found that the paper had a list of follow-up questions that were yet to be posed to Michel on ‘Mrs. Gandhi’. “The paper was lying on a table in the same room, which he managed to get hold of and handed over to the Counsel,” said an official. The questions are based on the documents gathered by the ED during the probe so far.

Alleging that there was a conspiracy to either shield or tamper with the evidence that could be brought forth from Michel’s questioning, the ED urged that permission to the accused for legal access be discontinued.

Also, submitting an incident report on the matter and asking that Michel be denied access to his lawyers, the ED said, “Benefits of legal access should be discontinued… He was actually seeking some direction on what to say and also to send word outside on the line of questioning.”

The ED further said that in one of the contract negotiation documents, “it is mentioned ‘son of an Italian lady… Going to be the next PM’… We have to also confront him with these documents… We have to identify the proceeds of the crime. Officials have been paid money near the North Block and we have to identity them… We also need to decipher who the ‘big man’ referred to as ‘R’ is in the communication between Christian Michel and other people. We need to confront Michel with other people to decipher who ‘the big man’ or ‘R’ is.”