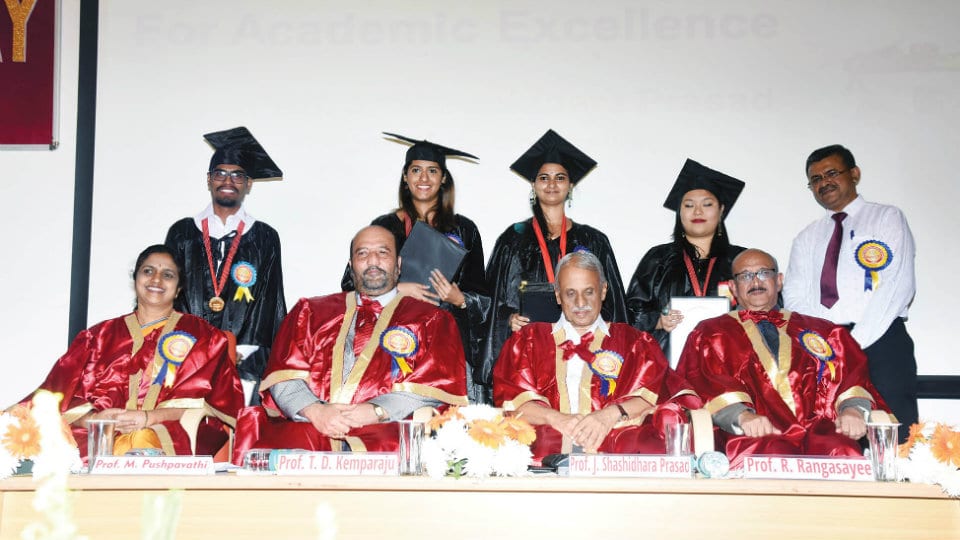 AIISH graduates urged to make “Health for All” a reality

Mysuru:  The Graduation Day of All India Institute of Speech and Hearing (AIISH), Mysuru, the premier institute in South-East Asia in the field of communication disorders, was held on Dec.15 at its Seminar Hall in the Knowledge Park, Naimisham campus.

Prof. T.D. Kemparaju,  Vice- Chancellor of Bangalore North University, who delivered the Graduation Day address mentioned that the quality of health mainly depends on the quality of healthcare professionals. Health is a nation-building strategy. The graduates and scholars who will be receiving degrees, awards and prizes today are nation’s investment capital for building a better future. The asset of India is the young population, he said and urged the young graduates from AIISH to contribute in making the nation’s dream “Health for All” a reality.

India needs a comprehensive, implementable, inclusive Universal Health coverage policy led by the Government as the foundation for continuing national development. He stressed that graduates should focus on humanitarian considerations while treating their patients.

He called upon the students to feel proud of the fact that they are passing out of the best institution in the country.

Stating that they have been imparted a professional training in addressing problems related to communication disorders so that they can help the country by providing the much needed globally competitive, ethically sound human resource, he said that AIISH should try to get the status of an independent University.

Prof. R. Rangasayee, Chair- Audiology Committee, International Association of Logopedic and Phoniatrics, administered oath to the graduates and asked them to cope up with work demand in the outside world, that may vary between systems,  in an evolving multidisciplinary framework, utilising the resources by way of knowledge, skill, and networking that they may carry from here, to begin with.

Prof. M. Pushpavathi, Director, AIISH, in her presidential address, wished that the students should serve as ambassadors of the institute wherever they are.

Certificates were awarded to 100 outgoing graduate, post-graduate and doctoral students  in the field of speech and hearing. Eight students received gold medals for outstanding academic excellence.