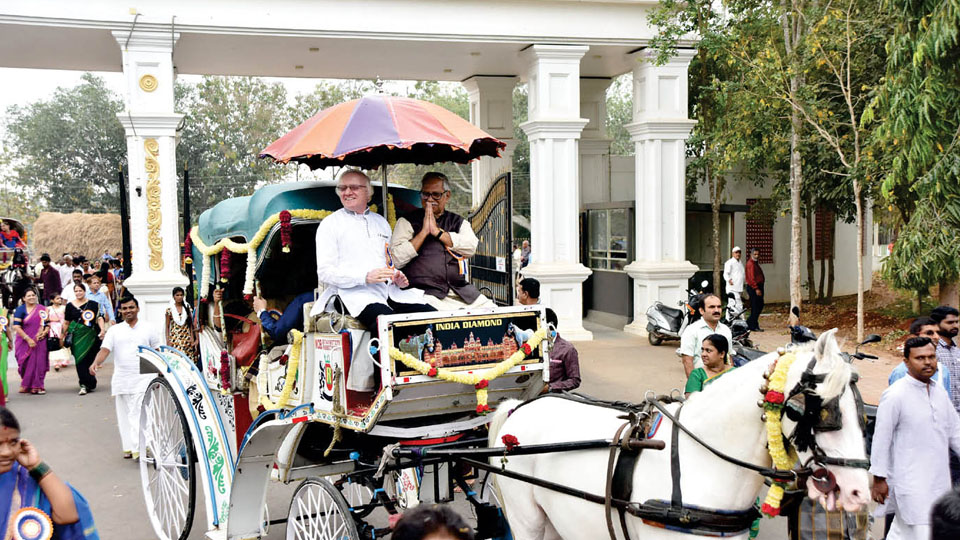 Member of the erstwhile Mysuru Royal Family Pramoda Devi Wadiyar inaugurated the Sammelana by lighting the lamp on an earthen pot.

Speaking on the occasion, Pramoda Devi at first thanked the organisers for inviting her to inaugurate this important Kannada Literary Meet, considering the contributions made by the erstwhile Mysore rulers for the promotion of Kannada.

Pointing out that saying ‘Namaskara’ or ‘Namaste’ was very much associated with Indian culture, she said that receiving blessings from elders was also very much an Indian tradition.

Maintaining that one can achieve much by shunning arrogance, she stressed on the need for showing respect to elders.

Noting that the translation of great epics such as Mahabharatha, Ramayana, Rigveda etc., which are originally in Sanskrit, to all Indian languages would be of great help to promote our rich heritage, traditions and culture, Pramoda Devi underlined the need for carrying forward our rich culture for coming generations as well. Pramoda Devi Wadiyar is seen inaugurating the State-level Akhila Bharatiya Sahitya Parishad Sammelana at Senate Bhavan in Manasagangothri this morning as other dignitaries look on.

Highlighting the contribution of Kannada in maintaining unity, she observed that such meets provide a platform to exchange ideas on promoting language.

Observing that every writer has some sort of a solution for eradicating social evils such as caste system, intolerance, bonded-labour etc., he said that the very basis of literature rests on peace and harmony.

Explaining the characteristics of religious tolerance, Dr. Doddarangegowda said that most of the country’s religious beliefs are well-explained in our literature.

Pointing out that folklore, Vachana Sahitya, Keertanas and the like portray the humanistic face of our society, he said that good thoughts formed the basis for Bhakti and Yoga Parampare.

Quoting Kuvempu, Da.Ra. Bendre, Pu.Thi. Na., Dr. Shivaram Karanth and others efforts for ending bonding labour, he said that Kannada literature was enriched by great works of a number of renowned writers.

Underlining the role of the writers in taking forward the society in the right direction, he emphasised on the need for portraying the characteristics of Indianness (Bharatiyate) much more in our literary works.

Earlier, the Sammelana Chairperson Prof. Premashekar, a noted columnist and writer and veteran litterateur Dr. Dodarangegowda were brought in a grand procession from Kuvempu Statue at the entrance to Manasagangothri campus on Bogadi Road to Senate Bhavan.

Prior to the procession, Kuvempu’s statue was garlanded marking the Rashtrakavi’s birth anniversary.

The procession was accompanied by a host of folk and cultural troupes.

The two-day meet, which concludes tomorrow, features various ghostis and sessions, in which noted writers will deliver lectures.

The valedictory will take place tomorrow with Saraswati Samman awardee Dr. S.L. Bhyrappa as the guest of honour.