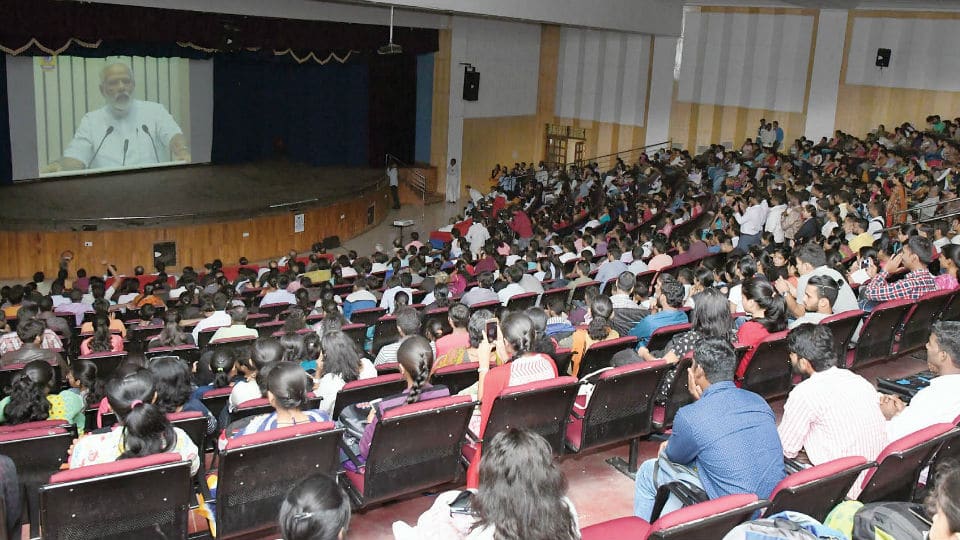 He said those who chant Vande Mataram go and litter roads. “Whether we clean the roads or not, we do not have the right to litter our motherland,” he added.

PM Modi was speaking to mark the 125th anniversary of Swami Vivekananda’s Chicago address and centenary celebrations of Deendayal Upadhyaya.

Speaking about Swami Vivekananda’s address at Parliament of Religions in Chicago on Sept.11, 1893, PM Modi said people in India remember 9/11 of 2001. “Today is 9/11…this day became widely spoken about after 2001 but there was another 9/11 of 1893 which we remember. Just with a few words, a youngster from India won over the world and showed the world the power of oneness,” the PM said and appealed the youth to build toilets first before building temples. “Swami Vivekananda said that only rituals will not connect an individual to divinity…‘Jan Seva is Prabhu Seva’.”

Prime Minister Narendra Modi said Swami Vivekananda gave the concept of ‘One Asia’. “He (Swami Vivekananda) said that the solutions to world’s problems will come from Asia,” Modi said. He said the youth of the country should be job-creators and not job-seekers. He also urged students to focus on cleanliness while campaigning for university elections. On Sunday, the PM, in a series of tweets, said the theme of his address will be “Young India, New India.” He further added that the convention will take place on the same day Swami Vivekananda delivered his Chicago address in 1893.

Cheers, protest mark Modi address in city: Loud cheers and protests marked the Prime Minister Modi’s speech at Senate Hall in Manasagangothri, here this morning. A large LED screen(12ftX24ft) was placed on the dais as hundreds of students gathered in the Hall to listen to the address of the Prime Minister. Meanwhile, a few teachers including Prof. C. Sarvamangala, Prof. Roopa Rao, activist P. Mallesh staged a protest outside the hall expressing their ire at the forceful imposition on the part of the University of Mysore to listen to the PM’s speech.

They charged that in a free, secular country, it was not right on the part of University of Mysore Registrar to issue a circular to Chairmen and Directors of all the Departments and Principals coming under the University to compulsorily attend the live telecast of PM Modi’s speech at Senate Bhavan, following the direction of Secretary for University Grants Commission (UGC).

However, the atmosphere inside the Senate Hall was charged as the students whistled loudly when the Prime Minister began his address. They listened with rapt attention for over an hour as the PM eulogised Swami Vivekananda and Deen Dayal Upadhyaya’s contributions to the nation.

“It was an inspiring speech by our Prime Minister Modi today. By listening to him speak about Swami Vivekananda, we feel that we should also contribute to the nation,” said Rekha, Aditya and a few other students.

4 COMMENTS ON THIS POST To “Don’t chant Vande Mataram if you spit paan, throw garbage on roads: Modi”