Home » Columns » Abracadabra By K. B. Ganapathy » All eyes on Supreme Court 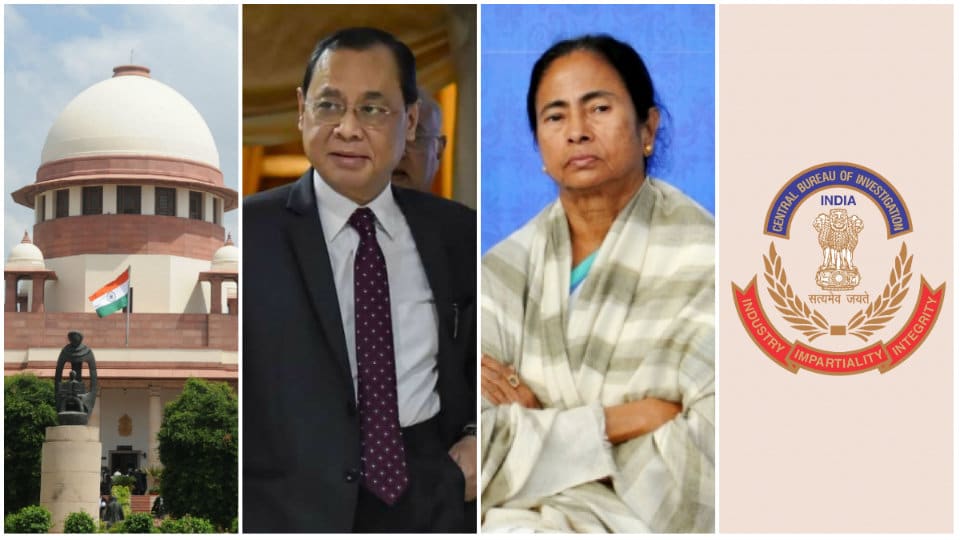 All eyes on Supreme Court

Not only the custodian of the Constitution but also of Democracy

Save Constitution? Save Democracy? Save Police Officer? But who will save those who were cheated ?

If salt loses its savour with what shall it be salted? —Bible

The events people of our country were witnessing at West Bengal’s Kolkata following the confrontation between CBI officials and the Chief Minister Mamata Banerjee do not augur well both for our Constitution and Democracy.

India Today, India’s leading English Weekly, had expressed this view eloquently in its Editorial dated May 9, 2016 in the very opening paragraph itself. Let me quote:

“Of the four pillars of democracy, it’s the judiciary which is supposed to be the most dispassionate. While political leaders traditionally have a penchant for theatrics, bureaucrats for expediency, and the media for hyperbole, the judiciary applies the letter of the law and acts as a custodian of the Constitution. It is often the final, and the most trusted, port of call for any aggrieved citizen.”

Of course, the context was when the then Chief Justice of India (CJI) T.S. Thakur broke down while making an emotional appeal to Prime Minister Narendra Modi, who was also on the dais, to appoint more Judges to handle the avalanche of litigation the Courts across the country face. Sadly, Modi did nothing so far. Early disposal of cases has its healthy and beneficial effect on our society and will increase the efficiency of the administration leading to good governance.

Former Judge of the Supreme Court and former Karnataka Lokayukta Justice Santosh Hegde had said many times in his public utterances and speeches that one of the ways to curb corruption is speedy disposal of cases — civil, criminal and also corruption — within a reasonable  time. The inordinate and unconscionable delay has gone to such a ridiculous extent that we hear of names of dead persons being called as Defendants and Respondents in Courts conducting cases pending for many years.

But then who wants corruption cases to be effectively investigated? Not the politicians. Not the bureaucrats. Only the victims. But who listens to the victims? The only hope is our Courts. But do the victims see even a ray of hope from the Courts?

I am not surprised when the last resort of a victim’s hope for justice is mentioned as the Law Court, my friend guffawed. He said that the laws are so perforated even a ‘hanging’ Judge would find it difficult to pass an order of ‘guilty.’

Be that as it may, what we see in Kolkata presently is the theatre of the absurd, nay abuse of power, by a Chief Minister caught in the web of countenancing corruption and fear of losing power. A corruption which might have helped Mamata Banerjee’s Trinamool Congress (TMC) win the election (against the Communists who ruled West Bengal for 35 years without break) in 2011 and in 2016 successively.

Now that the size of the corruption and violent nature of administration are exposed, Court conviction being awaited and also a defeat in the ensuing May 2019 Parliamentary election, it is natural Mamata Banerjee is nervous. But then, she knows offence is the best way of defence and so is the unedifying comic-tragic spectacle in Kolkata. All to defend one IPS Police Commissioner by name Rajeev Kumar, who CBI claims is in possession of e-documents and also other papers relating to scams under investigation. Note this. The CBI team had come only after Rajeev Kumar ignored 6 summons from the CBI.

And what kind of scams they are?

1. Saradha Scam: This was a major financial fraud which lured lakhs of investors to deposit money in its schemes with glossy brochures and the promise of abnormally high returns. An official estimate says Saradha had mopped up about Rs. 1,200 crore through its chit funds, but some calculations put that figure closer to Rs. 4,000 crore. The company set up during earlier Communist rule collapsed in April 2013. TMC has two MPs who were part of Saradha. Several political leaders from TMC received financial support from Saradha Group. Politicians from outside the State also                                                         benefited from the scam. The most affected States in the Saradha Ponzi Scam were West Bengal, Odisha, Assam, Jharkhand and Tripura.

The Supreme Court transferred the case to CBI after serious allegations of international money laundering, severe regulatory failures and political nexus surfaced. The company’s head Sudipta Sen went missing soon after the scam unfolded. He was reportedly incommunicado since April 13, 2013, a few days before cheques issued by his Saradha Group began to bounce. He and his right-hand woman were arrested soon after in Jammu and Kashmir  after a cross-country chase over many days.

2. Rose Valley Scam: This is a bigger financial fraud than the Saradha scam and according to Enforcement Directorate (ED) estimates, more than Rs. 15,000 crore was reportedly collected from depositors across India, mainly from West Bengal, Assam and Bihar. According to ED, a portion of the money was also used to bribe politicians so that the scam can run smoothly. Millions of people invested their life savings with hopes of high returns but in the end, all that they had saved got lost in the deep web of scams. The Securities and Exchange Board of India (SEBI) had probed the company before the ED and the CBI registered cases against the Group.

Rajeev Kumar, a 1989 batch IPS Officer, had headed a Special Investigation Team (SIT) probe connected to Saradha and Rose Valley Ponzi Scams before the case was transferred to the CBI in 2014 on Supreme Court’s orders.

He has been under fire from the CBI over missing documents linked to the investigations. After media reports that Kumar was “absconding” and he was facing arrest by the CBI, the Kolkata Police said they will take action over the “defamation” by media houses.

So much of cheating of lakhs of poor people who invested in Saradha and Rose Valley and yet the Chief Minister herself goes to the defence of a Police Officer who needs to be investigated in these scams, under the direction of the Supreme Court.

Now it is for the Supreme Court, the last hope of the victimised, gullible citizen of this country, to rise to the occasion, rising above the mindset that had embraced the Supreme Court after that unprecedented and questionable press conference held by four Judges, including the present Chief Justice of India Ranjan Gogoi, on Jan. 12, 2018.