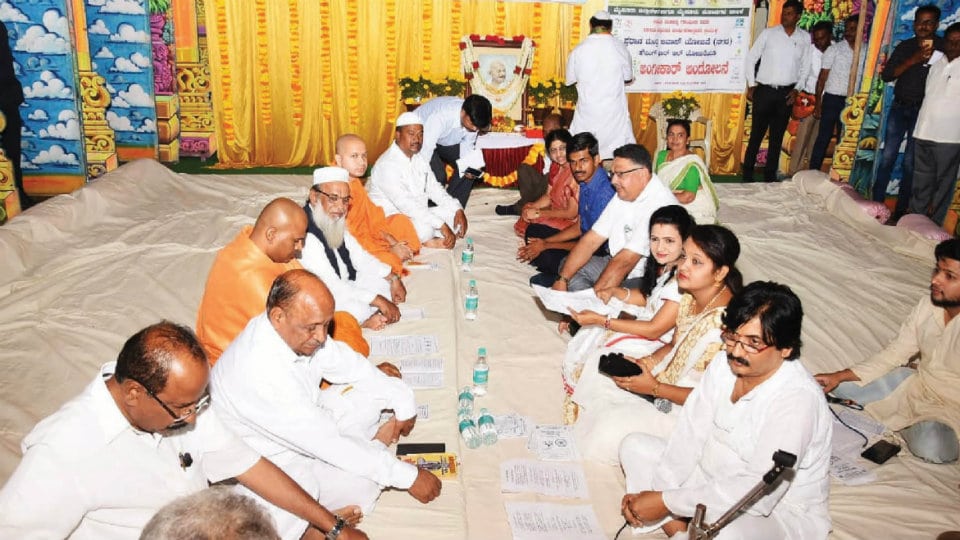 However, District Administration seems to have forgotten to celebrate the 116th birth anniversary of Lal Bahadur Shastri, the second Prime Minister of Independent India, which also falls on Oct.2, as no official celebration took place.

District Minister V. Somanna inaugurated the Gandhi Jayanti celebration by offering floral tributes to a portrait of the Father of the Nation.

Later, a prayer meeting was held in which religious heads from Hindu, Muslim, Buddhist and Jain communities rendered prayers from Bhagavad Gita, Quran, Buddha Dhamma and prayers of their respective religions. The meeting stressed on the need for following Gandhian principles in maintaining peace and harmony.

V. Somanna also released ‘Baapu-Paapu,’ a booklet on the life of Mahatma Gandhi, brought out by the Department of Information and Public Relations on the occasion.

Marking the celebration, the MCC launched ‘Angikaar campaign,’ an initiative of the Union Housing and Urban Development Ministry, aimed at bringing beneficiaries of PMAY (Urban) into the fold of Central schemes such as Ujjwala and Ayushman Bharat.

Speaking after the launch, MCC Assistant Commissioner Shivananda Murthy said that as part of Angikaar campaign, resource persons will visit households and educate the citizens on the benefits of the scheme using a mobile app.

Calling for public co-operation to ensure the success of the campaign, Shivanandamurthy said that the campaign launched today, would end on Dec.10 this year.

Gandhi Jayanti was also celebrated at Gandhi Bhavan in Manasagangothri campus at a function jointly organised by Centre for Gandhian Studies, University of Mysore (UoM) and Jnana Deepa Shikshana Samsthe.

The event began with members present on the occasion offering floral tributes to the bust of Gandhiji.

Dr. B. Sujay Kumar, a Gandhian from Srirangapatna and freedom fighter C.R. Ranganath spoke about the life and ideologies of Mahatma Gandhi.

On the occasion, a ‘Sadbhavan Nadige,’ a harmony walk, was taken out from the Congress office to Freedom Fighters Park at Subbarayanakere Grounds on Narayan Shastri Road, where several freedom fighters were felicitated.