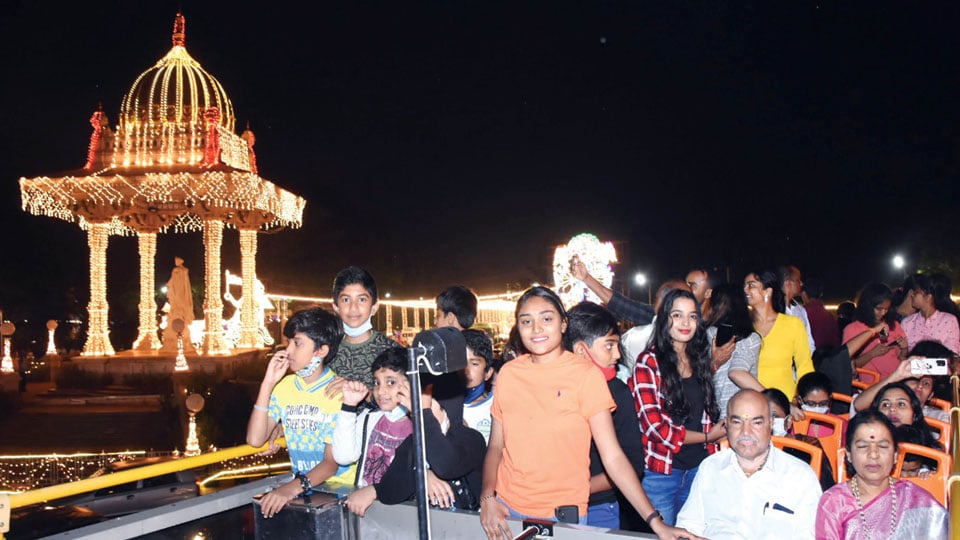 Mysore/Mysuru: Illuminated streets of Mysuru, photos and videos on social media about the roof-top trips amidst the evening pleasant weather and, of course, the VVIP trip taken atop the bus by Chief Minister Basavaraj Bommai and a few of his Cabinet colleagues recently have popularised and given enough publicity to Ambaari, the double-decker hop-on and hop-off bus service.

The bus covers over 35 destinations and tourist landmarks in Mysuru. There is a huge demand for trips beyond 6 pm as the city lights, as part of Dasara festival, are switched on from 6.30 pm to 10 pm daily. The illumination will be on till Oct. 24.

All those who dread to drive during nights amidst bumper-to-bumper traffic on city roads to see the illumination and all those who dare not to walk on pothole-filled roads and on broken footpaths prefer a hassle-free ride in the Ambaari.

From Oct. 7 till Oct. 20, over 4,045 people have taken the bus ride and each ticket costs Rs. 250. The Karnataka State Tourism Development Corporation (KSTDC) that runs the service is upbeat after garnering Rs. 10,11,250 and the officers are expecting a windfall till Oct. 24 and also later as the bus service has become famous.

The bus service has also become popular among other tourists who are coming in droves from faraway places. Those who are not familiar with Mysuru roads and those who are bogged down by the one-way rule imposed by the city Police — and the resultant perennial traffic jams — are opting for Ambaari service.

Every day, tickets are sold out by 9 am and display boards are put up in front of the KSTDC Office on JLB Road about sold out tickets. There is a huge demand for roof-top seats in the evenings. The KSTDC had launched the service after many delays and postponements and initially only one bus was brought onto the roads. But now, there are six Ambaaris that are ferrying people from the KSTDC Office on JLB Road around the city and back to the starting point. Tourists will also get an audio guide when the bus reaches the tourist sites identified on the route.

So high is the demand for evening trips that those who did not manage to get a seat are still buying tickets for a trip standing on the rooftop space. For the tourists — taking an open roof-top trip in a pleasant evening breeze — the ride is special as they are travelling under the serial lights while passing through illuminated landmarks.