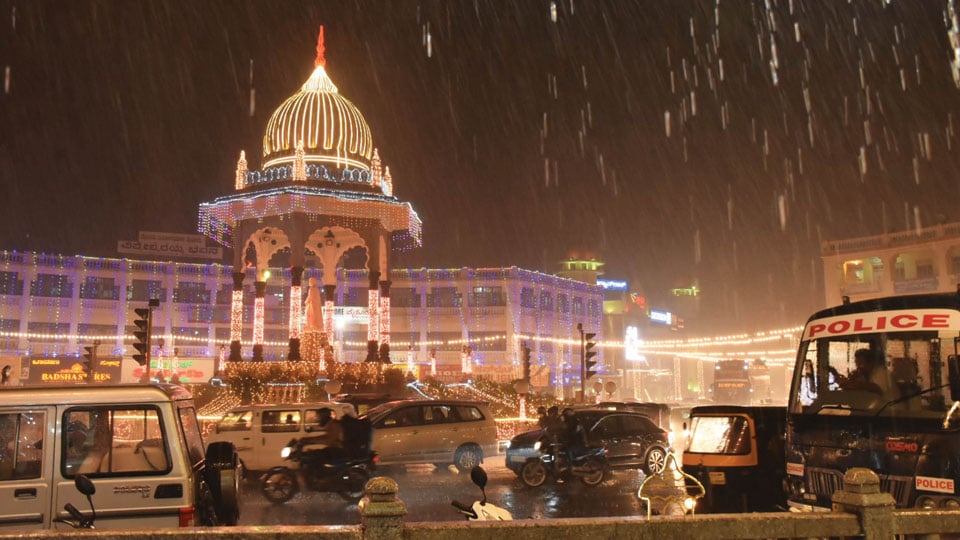 Rains, which had given break for two days, began to pour at about 6.30 pm causing people, most of them returning homes from work, to take shelter in bus stands, petrol bunks, hotels, big buildings, under the bridges etc. Even those driving four-wheelers, had to stop on roadsides and switch on the hazard indicator lights to warn others due to poor visibility following heavy downpour.

Houses flooded, trees uprooted: More than 50 houses in low-lying areas such as 6th and 7th Cross in Janata Nagar, near Saalumarada Thimmakka Park in Dattagalli, Gangotri Layout, behind Basaveshwara Kalyana Mantap in Paduvarahalli, Ghousianagar etc. were flooded with rain water and the residents had a tough time removing water from their houses.

Mysuru City Corporation’s (MCC’s) Abhaya team members Manju, Shivu, Ravichandra, Nagendra and others, who rushed to the above places, helped the residents to remove rain water from houses.

Huge trees near DC Office and on Maharaja’s College Grounds were uprooted and the MCC staff was seen clearing the trees and fallen branches this morning.

Tourists disappointed: Tourists, who had come to city from other places just to view Dasara illumination on various city roads, were a disappointed lot as heavy rains began to lash across the city about 6.30 pm disrupting the visibility. Also, CESC officials as a precautionary measure switched off power supply at some places. LED light illumination on a few roads was also cut off.

Agricultural fields flooded: Meanwhile, farmers of Hallikeri Hundi, Varuna hobli in the taluk, who called SOM Office this morning, said that the agricultural fields belonging to Govindu, Kuntegowda and Narayana were flooded and resembled a lake following heavy rains yesterday.

They said that their fields get inundated with rain water every time when there is heavy rains destroying crops and causing loss in revenue. They said that they take loans from banks for cultivation and following rains causing losses, they have to pledge valuables to repay the loans.