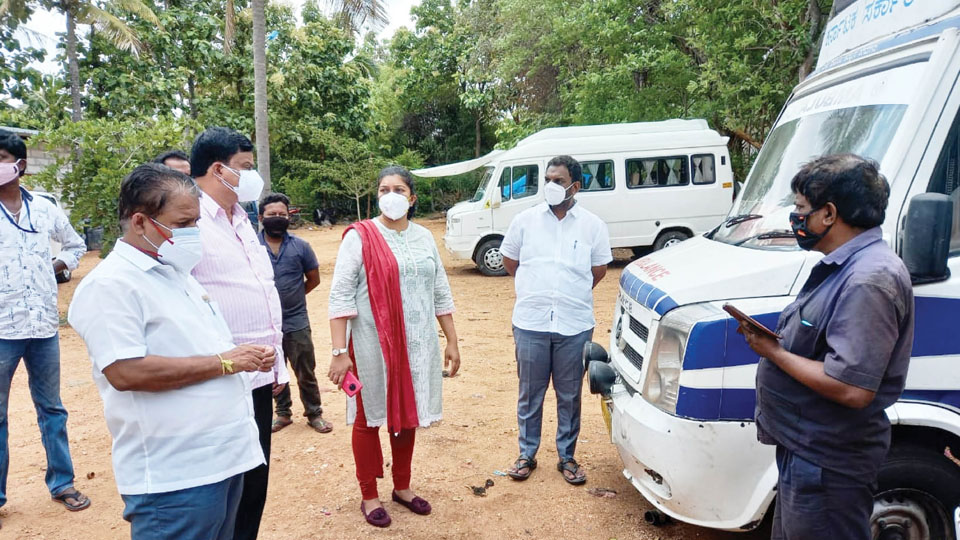 Mysore/Mysuru: Zoo Authority of Karnataka (ZAK)Chairman L.R. Mahadevaswamy, who is in-Charge of the District Ambulance Task Force, said that measures have been taken to provide free ambulance service for timely shifting of Corona infected patients to Hospitals and COVID Care Centres.

Addressing the Ambulance Task Force meeting at ZP Hall here yesterday, Mahadevaswamy bemoaned that the good services rendered by ambulances is getting overshadowed due to minor lapses here and there.

Regretting that the authorities are drawing flak because of lack of timely service even though there are enough ambulances, he  stressed on the need for providing timely ambulance service as precious hours is vital in COVID treatment.

Maintaining that shifting of patients to Hospitals in private vehicles too has been a cause for virus spread, Mahadevaswamy emphasised on augmenting  free ambulance services at all levels in the district. Noting that 108 ambulance service must be utilised in shifting the COVID infected, he wanted the Health Department to purchase ALS (Advanced Life Support) ambulances and deploy two of them to every taluk. He also batted for a War Room-like facility for ambulance service.

Jungle Lodges and Resorts (JLR) Chairman M. Appanna, who is in-Charge of last rites of COVID dead, asserted that there were no problems in the transportation of bodies and cremation of COVID dead in Mysuru city. But there are problems in rural areas due to lack of vehicles.

Noting that the absence of a Government vehicle arrangement system has left poor relatives of COVID dead severely inconvenienced, Appanna appealed the authorities to reserve vehicles for shifting of bodies to rural areas.

MUDA Chairman H.V. Rajeev, who heads the Bed Management Task Force, said that there were many complaints of fleecing by private ambulance drivers who charge exorbitant money for shifting of bodies. Pointing out that all private ambulances in service must be registered, he said that hiring fares must be fixed on kilometre basis.

Observing that action must be taken against ambulance drivers who demand more money than fixed fares, Rajeev said that Private Hospitals must put up boards mentioning the treatment costs fixed by the Government. He said that the display of such boards will help stop fleecing of patients.

MCC Commissioner Shilpa Nag said that a Nodal Officer will be appointed for management of 108 ambulances. Taking strong exception to non-utilisation of 5 ambulances fitted with Ventilators and ICUs due to pending repairs, she directed the officials to get them immediately repaired and put them in service at the earliest. The Nodal Officers will monitor the quality of service rendered by the ambulances, she added.

Pointing out that these TT vehicles had shifted 60 to 80 patients daily during the pandemic outbreak last year, he said now these vehicles are shifting 30 to 40 patents daily. He attributed the drop  in numbers to the tendency of  scary people to rush patients to hospitals in their own vehicles soon after they (patients) test positive for the deadly virus.

Meanwhile, it is learnt that the district has thirty-three ‘108’ ambulance services, out of which 28 are in service and five are under repair for the past one year. Out of the 28 ambulances available, two are assigned for COVID patients, 10 for Nagu-Magu initiative and the rest for other health services.  Also, the RBI has donated three ambulances, with one each deployed at District Hospital, Trauma Centre,  both located on KRS road  and a COVID Mitra Centre.