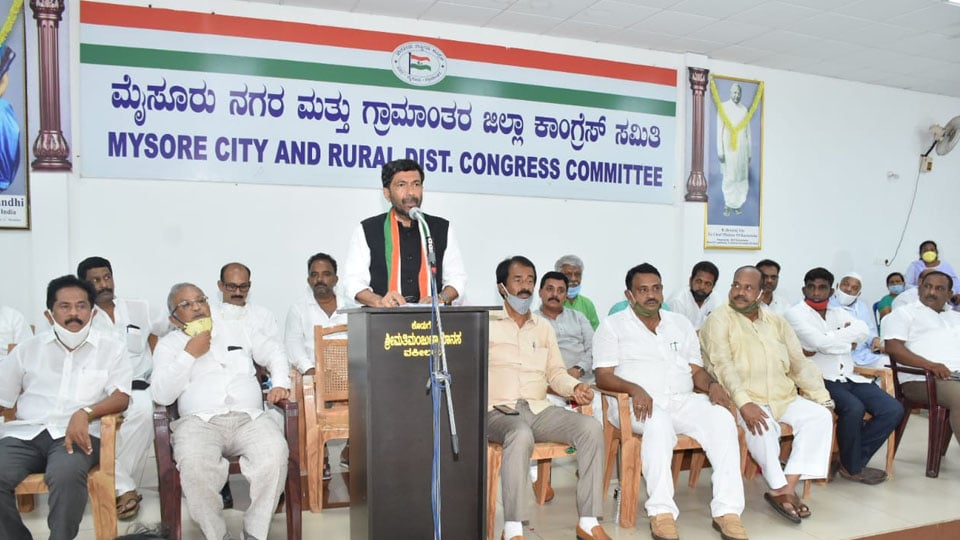 ‘Congress has come to the aid of migrant workers’

Mysore/Mysuru: Accusing the ruling BJP Government of failing to come to the aid of migrant workers, who are distressed over COVID-19 lockdown regulations, KPCC (Karnataka Pradesh Congress Committee) Working President Salim Ahmed maintained that the Congress, as a responsible Opposition Party, has come to the rescue of migrant workers at this critical juncture.

He was addressing party workers at the meeting organised by the City and District Congress at the Congress Bhavan near the City Railway Station here yesterday to discuss preparations for the new KPCC President (D.K. Shivakumar) installation programme to take place at Bengaluru on June 7.

Charging the Union Government headed by Prime Minister of failing to tackle the COVID-19 pandemic, Salim Ahmed termed the PM’s recent announcement of Rs.20 lakh crore package to reboot the economy as bogus.

Pointing out that although the State Government has announced a big package covering various sectors, he maintained that there is a lack of understanding between Chief Minister B.S. Yediyurappa and his Cabinet colleagues.

Stating that party leaders and workers have distributed 1.6 crore food kits, 75 lakh ration kits, 35 lakh face masks  and 7 lakh sanitiser bottles to the poor and the needy across the State since the past two months, Salim Ahmed said the Congress has constituted Task Force Committees at Taluk and District levels to come to the rescue of the affected.

He further said that the party has begun preparations for beaming live the installation of D.K. Shivakumar as the new KPCC President on June 7 at 8,000 spots, including villages across the State.

Pointing out that the lockdown curbs does not permit public gatherings, Salim Ahmed said Zoom App is being utilised for telecasting the programme live in order to reach out to a maximum number of people.

Former Minister and senior party leader Dr. H.C. Mahadevappa said that the strength of the party lies in grassroot level workers and it is important for the party to recognise them.

Former K.R. MLA M.K. Somashekar charged that the BJP’s maladministration had pushed lakhs of people to distress in the State.

Former Chamaraja MLA Vasu alleged that the BJP was talking about attacking China only as a cover to hide its failures. Asserting that the Congress would return to power both in the State and the Centre in the near future, he called upon the party workers not to lose confidence and strive for strengthening of the party at all levels.

City Congress President R. Murthy said that measures have been taken to telecast Shivakumar’s installation as KPCC President in all the 65 wards of the MCC through Zoom App. The party leaders of all the four Assembly segments in the city have been asked to ensure social distancing and compliance of other lockdown curbs by the public during the telecast, he added.