Home » News » Amidst bandh, Tipu Jayanti in Kodagu was over in 20 minutes 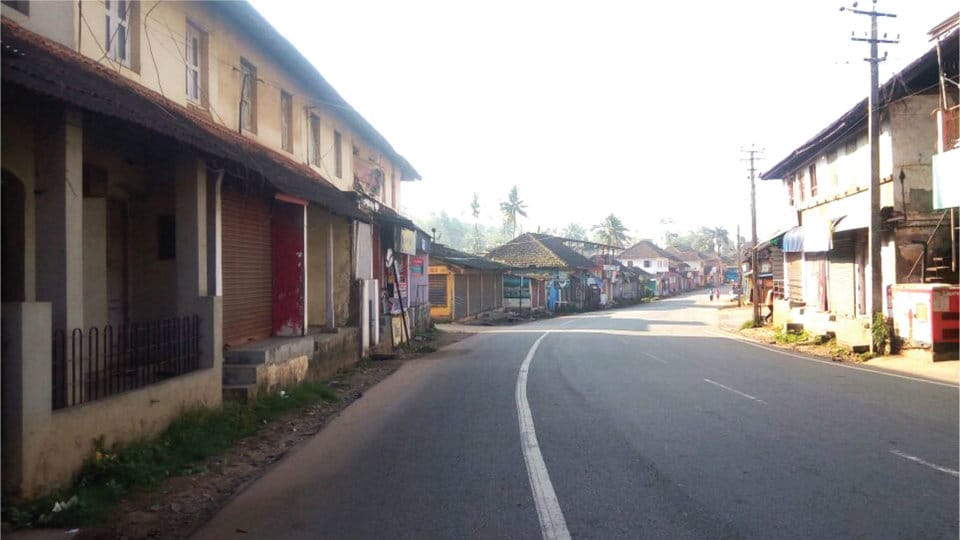 Amidst bandh, Tipu Jayanti in Kodagu was over in 20 minutes

Madikeri: Amidst district-wide bandh in Kodagu, the official Tipu Jayanti celebrations in Madikeri town and Kodagu district concluded with no major untoward incident but for a few stray incidents of stone throwing. Seats of a Police jeep were torn in Madikeri. Over 200 people were arrested and released later as a precautionary measure.

The dawn-to-dusk bandh call was given by Tipu Virodhi Horata Samithi. Prohibitory orders under IPC Section 144 have been clamped in the district and will remain in force till 6 am on Saturday (tomorrow).

In a bid to prevent any untoward incident that could escalate tensions, surveillance was stepped up at the 10 check-posts which are the entry points to Kodagu from Kannur, Wayanad and Kasaragod in Kerala, Hassan, Dakshina Kannada, and Mysuru.

The bandh was total in Madikeri, Kushalnagar, Napoklu, Murnad, Virajpet, Gonikoppal, Ponnampet, Srimangala, Kutta and Balele with over 168 private buses staying off the roads. Shops and business establishments downed their shutters and autos, private taxies too stayed off the roads. It was an unofficial holiday for schools and colleges in the district as students and teachers had no transport facility to reach their schools.

Buses plying from Mysuru towards Kodagu and Kerala were stopped near the border and none of them were allowed beyond the Anechowkur Gate and Thithimathi. Two or three private buses were, however, allowed to proceed towards Kerala in the morning as they had women and children. In Kushalnagar too, the bandh was total and over 100 people were arrested as a precautionary measure. Here too, KSRTC buses were prevented from proceeding towards Madikeri and they were stopped at Kushalnagar KSRTC bus stand. Protesters being taken into preventive custody at Kushalnagar

Kodagu DC Richard Vincent D’Souza said the situation was peaceful and the government programme went off without a hitch. However, there was one incident of stone-pelting in which the window panes of a KSRTC bus were damaged. Two trees were cut to create a road blockade but the Police reached the spot and cleared the road.

At the official function held at the Old Assembly Hall in the Fort, BJP MLA Appachu Ranjan and MLC Sunil Subramani raised their opposition to the event. Sunil Subramani condemned the government’s decision to celebrate Tipu Jayanti and this was countered by Congress supporters who raised slogans. The Police intervened and took the two BJP leaders into custody along with their supporters and evicted them from the venue. The function that took place later, however, concluded in just 20 minutes.

The BJP, VHP and other organisations strongly opposed the celebrations and conducted special prayers in memory of the victim of the 2015 violence. Security was beefed up across the district in view of large-scale communal violence against the event in which one person was killed in 2015.

As a precautionary measure, sale of liquor too has been banned while all check posts leading to the district have been fortified and being monitored with 44 CCTV cameras. Sector magistrates have been deployed at the Hobli-level and mobile Police squads too are patrolling across the district to serve as deterrence.

Additional Police forces have been deployed from other parts of the State as well with an Additional SP, 8 DySPs, 23 Police Inspectors, 68 Sub-Inspectors, 113 ASIs, 1,500 Constables, 27 District Armed Reserve (DAR) platoons, 15 KSRP platoons besides one company of the Rapid Action Force, given the sensitivity of the issue in the district.

Kodagu Tipu Jayanti
Thousands take part in AHIMSA rally at Bengaluru
Man cheats woman of Rs. 80,000 on the pretext of helping her withdraw cash in ATM