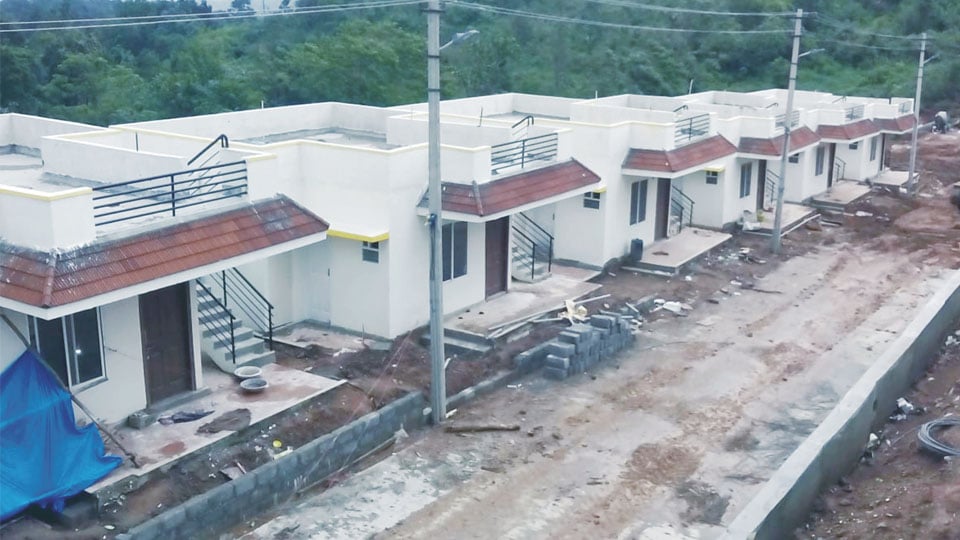 Madikeri:  Unprecedented rains, landslips and floods devastated lives and properties in Kodagu last Aug. 17 and 18. Many villages were wiped out as mud came crashing down carrying everything in its path — trees, mud, electric poles and houses.

It has been a tough one-year journey for those who lost their homes, hard-earned money and properties and they have been scarred for life. Though the natural disaster has wreaked havoc in the lives of people, there is a silver lining in those dark clouds. After initial hiccups and road blocks, brand-new, modern and secure houses are being built for the homeless to stay.

Finishing touches: Over 85 percent of the 423 houses that were promised in the first phase of rehabilitation project have been completed and the approach roads to the houses are being given finishing touches now. These houses are being built at Karnangeri, Jamboor, Katakeri and Madenadu and in all, 835 houses have been promised. However, the construction of the remaining 412 houses is yet to begin.

While the houses are being built in phases, people who have lost their homes have been accommodated in rented houses and a monthly rent of Rs. 10,000 is being provided to them by the State Government. The rent money is being directly credited to  the bank accounts of the victims, officials say.

Between Aug. 5 and 19 last year, unprecedented rains triggered by cloudbursts, floods and landslides brought untold misery to the people of Kodagu and over 30 percent of land in Madikeri and Somwarpet taluks was destroyed in previously unheard of havoc that was unleashed by nature, rendering hundreds of people homeless.

The District received over 200 mm rainfall on three consecutive days, on Aug. 15, 16 and 17, according to the Karnataka State Natural Disaster Monitoring Centre (KSNDMC). It was the highest amount of rainfall in Kodagu in 87 years.

The phase-by-phase mega rehabilitation housing project is being implemented by Nirmithi Kendra and each house has been built with pre-cast concrete. Rs. 9.80 lakh has been spent on each house and the areas that have been identified to build houses are certified by Geological Survey of India (GSI). The GSI has certified that the areas are plain in nature and are flood-and-landslide-proof.

Each concrete mould house is designed according to “M-20 Grade Design” and the built area is 425 square feet. Modern techniques have been used to build the houses and each house has 2 bedrooms, a hall and a kitchen. The houses are fire and earthquake-resistant and have all the modern facilities.

The Nirmithi Kendra initially faced difficulty in levelling the land as it was red soil. Lakhs of rupees were spent to level the land and then lay foundation stones. Frequent rain and slushy surroundings too hampered the rehabilitation works. But all the hurdles were overcome and a part of the housing project is seeing the light of the day.

For those who wanted to reconstruct the houses in their own land instead of living in the areas where the Government has constructed houses, Rs. 9.80 lakh has been handed over to each family and like this, 50 families have been sanctioned money.

This year, though the rainfall has been less when compared to last year, over 7,000 people have been provided temporary shelters at over 41 relief centres. They belong to over 2,000 families. All facilities are being provided to them. Once the District Administration identifies the houses that have been damaged by this year’s floods, new houses have to be built for them after identifying the land.