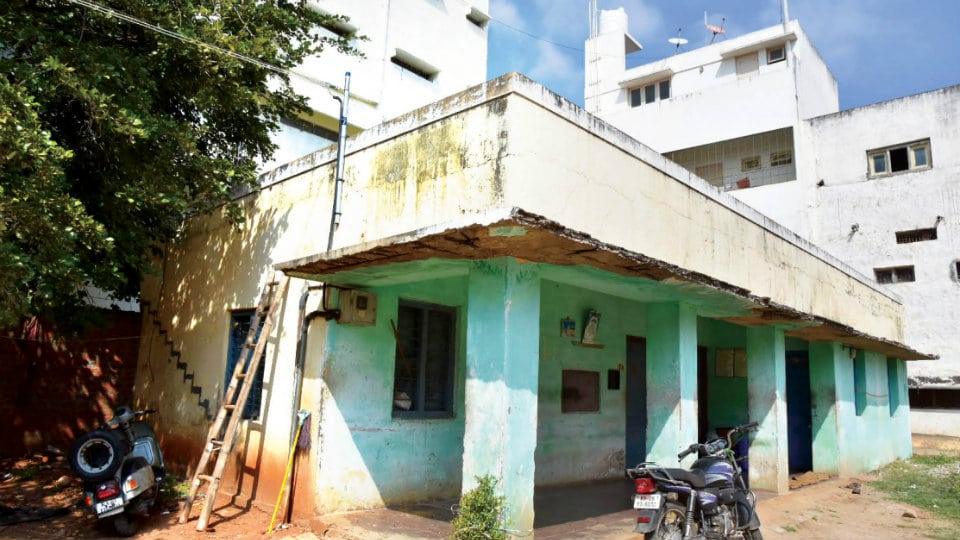 Mysuru: Even as Mysuru District Minister V. Somanna, who is also the State Housing Minister, waxes eloquently when it comes to the issue of housing for poor and homeless, a shelter meant for urban poor women in Mysuru that was maintained by the Mysuru City Corporation (MCC) has closed down.

Somanna, who has come a long way from the streets of Vijayanagar, Bengaluru, says that he wants to realise Prime Minister Narendra Modi’s pet programme ‘Housing for all by 2022’.

It was the only shelter for urban homeless women in city. Locks greet a visitor now and the reason for closing it down is that the building is in a dilapidated state and safety of women was at risk.

Located at Bidaram Krishnappa Mandira Road-Narayana Shastry Road Junction behind D. Devaraj Urs Road, the “Nirashritha Mahileyara Aashraya Thaana” (Home for Homeless Women), the building housed over 30 women since 2012. The MCC would maintain the shelter and as a noble gesture, free dinner used to be provided to women.

The structure that housed the shelter was once a Kannada Medium Government School that was inaugurated on 27.8.1984. The plaque that was unveiled during the inauguration of the school is embedded to the walls.

The school that functioned smoothly for many years gradually shut down as there were no students. The student strength reduced and trickled down and the school was closed in 2012. Utilising the building space, the MCC came up with an idea of urban shelter and reserved the space for women. The place housed all those homeless women who either did some chores at shops and markets or beggars.

They were given beds, pillows and blankets and were given dinner every day. Gradually, the shelter became popular with over 40 women occupying it in the night instead of sleeping in front of closed shops. The MCC Welfare Department used to spend Rs. 30,000 per month on food and had appointed a manager and two assistants to run the show at the shelter.

READ ALSO  If Opposition BJP rules MCC, who will oppose?

Gradually, the number of women opting for this shelter reduced and in the recent months, only three women had taken shelter. During the recent visit of Central Government’s Deendayal Antyodaya Yojana – National Urban Livelihood Mission (DAY-NULM) Director Arundati Chandrashekhar, it was brought to her notice that there were only three women taking shelter at the Centre.

“Following her direction, we shifted the three women from the shelter to the Office of Department of Women and Child Welfare where there is such a shelter for women. Arundati advised us that as the security of the three women was important, it was better to shift them from Bidaram Krishnappa Mandira Road to the Department of Women and Child Welfare Office at Vijayanagar near Krishnadevaraya Circle,” said MCC Additional Deputy Commissioner N.M. Shashikumar.

A model shelter for men

The MCC also maintains a shelter for homeless men near Vidyavardhaka College on Seshadri Iyer Road that has earned the distinction of a ‘Model Shelter for Men’. There are 36 men sheltered in here and MCC provides breakfast and dinner.

This Centre has received first place in the State for maintenance and the MCC has been running it since the past eight years.