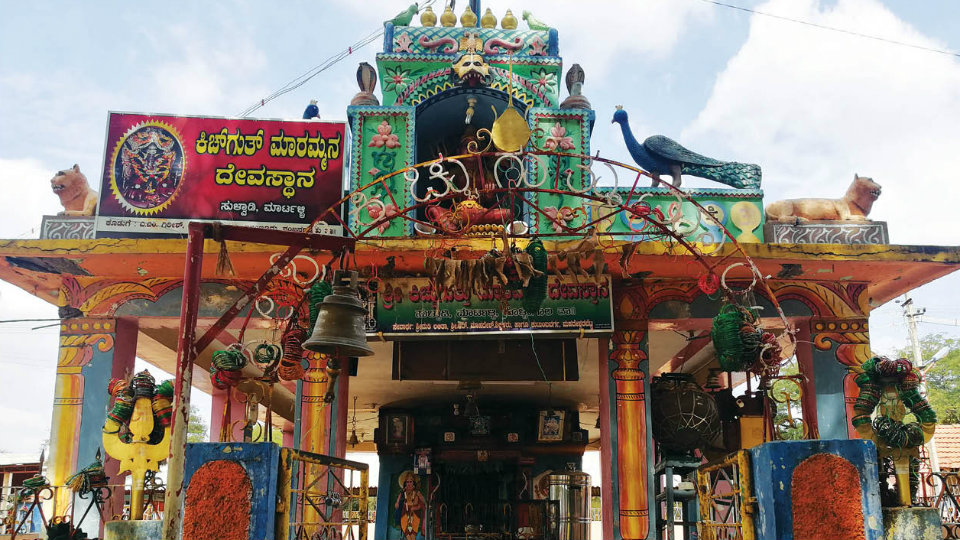 Chamarajanagar: December 14, 2018. This was the day when hundreds of devotees had come to Kichuguth Maramma Temple at Sulwadi in Hanur Taluk of Chamarajanagar district to witness the installation of a Gopura when some of them were served poison-laced prasadam by a set of people who wanted to allegedly settle scores with the Temple management.

Seventeen devotees lost their lives and more than 120 people were taken ill and maimed for life. Most of the devotees, who died or took ill, had come to the temple to view the Gopura installation by the Temple Trust. The programme was inaugurated by M.M. Hills Salur Mutt Seer Sri Guruswamy. The Temple Trust had prepared Tomato Rice Bath and Panchamrutha as prasadam for distribution to devotees.

After the performance of Mahamangalarathi, the pesticide-laced prasadam was distributed to devotees at around 9.30 am. After sometime, more than 150 devotees, who had consumed the Rice Bath, took ill, complaining of vomiting and diarrhoea and a burning sensation in eyes and stomach, following which they were rushed to various hospitals.

As Hanur and District Centre of Chamarajanagar is deprived of any good hospitals then, many victims were rushed to both private and Government hospitals in Mysuru. By evening of that day, 11 people had died and the toll mounted to 17.

Hospitals in Mysuru too welcomed the patients and began emergency treatment and many lives got saved due to urgent medical intervention. Investigations later revealed that the prasadam was allegedly distributed at the behest of Immadi Mahadevaswamy alias Devanna Buddhi, the junior pontiff of M.M. Hills Salur Mutt, Madesha, Manager of the Temple, his wife Ambika and former employee of the Temple Doddaiah Tambadi.

The conspiracy was hatched to take revenge against temple trustee Chinnappi, who had reportedly come in their way in looting the temple funds. Ever since the tragedy occurred, the temple has been locked and its management rests with the State Government. Villagers still visit the temple and pray behind closed doors.

Though the alleged perpetrators are in jail since then, villagers recount the horror stories and how their loved ones died in front of their eyes, unable to bear the pain. Even after one year, the villagers are yet to come out of the shock and the family members of the deceased are under severe depression.

Many of them, who received treatment for poisoning, complained that they are falling ill frequently after the incident. They complained of giddiness, stomach pain, diarrhoea and burning sensation. “We were eking out a living by working as labourers. Now, we are not called for work due to illness that is troubling us. Life has become very difficult and we wish that we were dead,” said Rukkamma of Bidarahalli, the village worst affected.

The then Chief Minister H.D. Kumaraswamy had promised two acres of land for the kin of the deceased. Also, sites were promised. Though the distribution of 30×40 sites for 58 affected families, under Rajiv Gandhi Housing scheme is in the final stages at Boludinni and Bidarahalli, allotment of two acres of land has hit a roadblock with farmers demanding more money to part with their lands.

Many of the victims feel too tired and lack the energy to work. “Because of this, we cannot go to far-off places to work. This has affected our livelihood. Day-to-day basis we feel the pain in the stomach and burning sensation in the eyes. Sometimes we just go blank,” said Roopa, another victim.

Houses to be build soon

The Chamarajanagar District Administration recently gave six sheep each to 36 survivors. Deputy Commissioner B.B. Cauvery said that while the cash as compensation was given away quickly, the land will be provided soon and the process of giving two-acres land near Maartalli (Bidarahalli) under Survey No. 42 to 58 homeless families has already begun. Sketches dividing the land have been prepared and a proposal has been sent to Rajiv Gandhi Housing Corporation to build houses, she added.