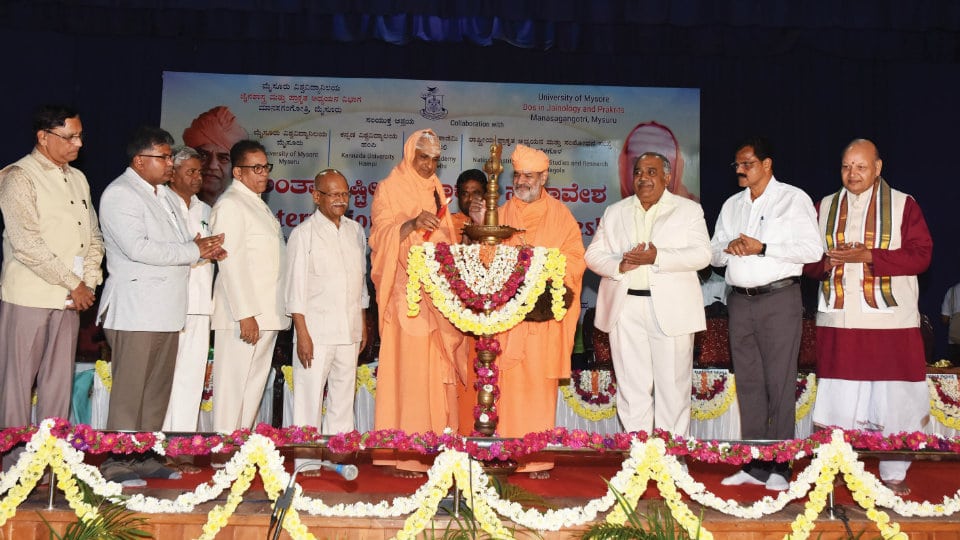 He was speaking at the inauguration of the two-day International Prakrita Samavesh-2019, organised by the University of Mysore(UoM), in association with Kannada University, Hampi, Sahitya Academy, New Delhi and National Institute of Prakrita Studies and Research at Senate Bhavan in Manasagangothri    here on Thursday.

Expressing concern that Kannada is losing it’s prominence due to the influence of English on Kannadigas, Bhattaraka Swamiji said that people in many European Countries prefer mother tongue over English and Kannadigas too should take pride in speaking their mother-tongue.

Highlighting the history of Prakrita and Sanskrit languages, the seer said that Mysuru which is called the cultural capital of the State is also an abode of learning and a knowledge hub.

Earlier, Suttur Seer Sri Shivarathri Deshikendra Swamiji who spoke after inaugurating the event, said that Jainism is known for religious tolerance and non-violence. Noting that the event also marked the 50th anniversary of Deeksha of Charukeerti Bhattaraka Swamiji, he said that the Jain seer is a scholar who has maintained a connect with the people. Recalling the translation skills of the seer, Deshikendra Swamiji said that the Seer has translated over 40 works on Jainism and Prakrita Studies             to Kannada.