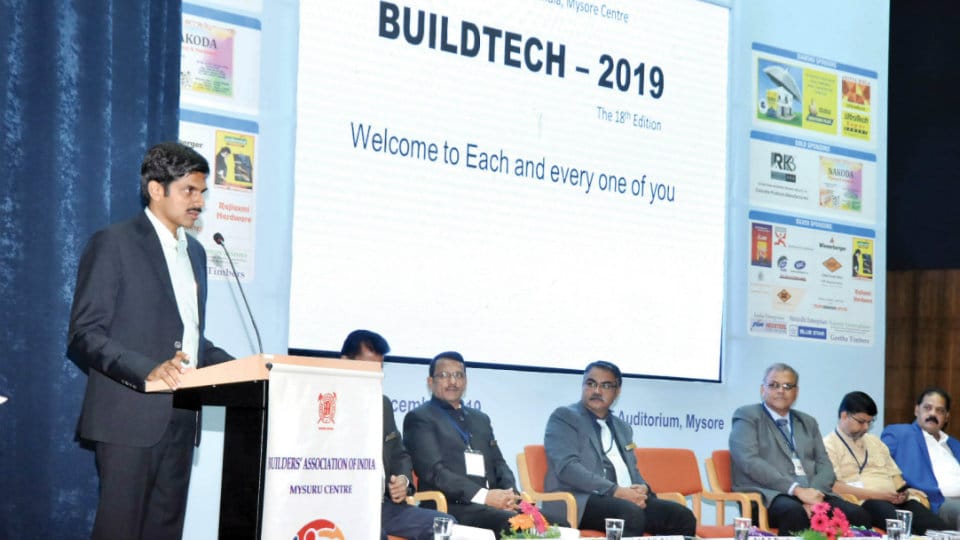 Mysuru: “Owning a house has become a symbol of pride for everyone these days and most of the people tend to believe that they work for the sake of building a house,” said Deputy Commissioner (DC) Abhiram G. Sankar.

He was speaking after inaugurating ‘BuildTech 2019’, a two-day National Seminar organised by Mysuru Centre of Builders’ Association of India (BAI) at MBCT Auditorium  in Vishweshwaranagar, here this morning.

Pointing out that the seminar having the theme ‘Shelter for all’ is being held at a time when Governments are working out plans to fulfill the objective of ‘Housing for all,’ Abhiram Sankar observed that the focus now is on eco-friendly ‘Green Homes’, with rain water harvesting and such other facilities.

Stressing on the need to popularise the concept of Green Homes, he said that the focus of housing has become inclusive of rural areas, with the Governments of today giving importance to rural housing as well.

BAI National Vice-President K.Sriram said that there were no takers for the problems faced by the housing  sector.

Noting that Prime Minister Modi’s ambitious scheme of ‘Housing for all’ which was expected to be complete by 2015-16, ran into hurdles and now the target has been extended to 2020-22, Sriram opined that the population explosion has been a major problem for fulfilling the initiative. Regretting that taxes run upto as high as 40 percent in various stages of construction process, he urged the Government to bring down taxes so that houses can become more affordable for the common man.