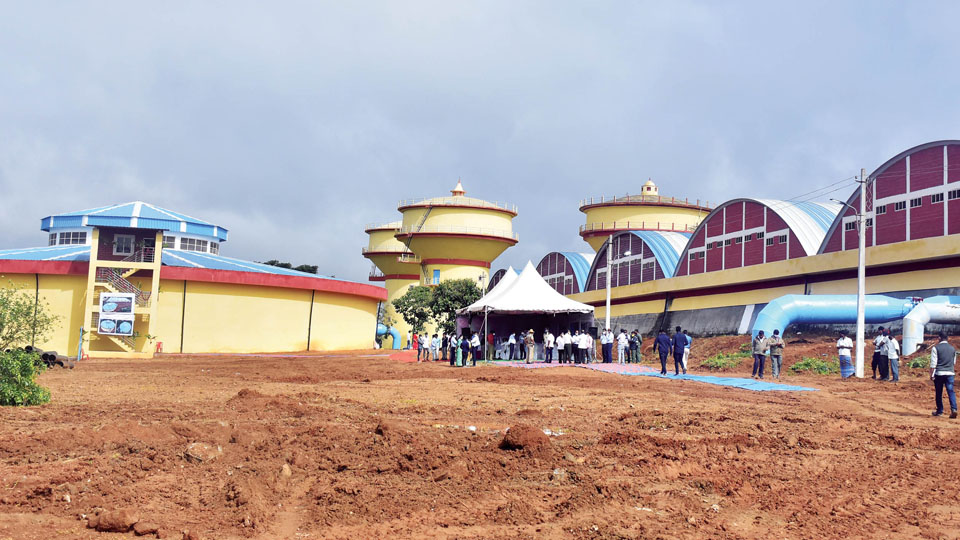 The 13-MLD (Million Litres per Day) capacity overhead tank, part of Central Service Reservoir (CSR) at Vijayanagar Second Stage that can totally store up to 27 MLD of water, was inaugurated by Urban Development Minister Byrathi Basavaraj in city on July 16.

The Works of Vijayanagar Second Stage old 18 MLD and 27 MLD tanks have also been completed and this too was inaugurated by District Minister S.T. Somashekar. The works were taken up under Atal Mission for Rejuvenation and Urban Transformation (AMRUT) scheme. Rs. 156 crore worth works were taken up in four packages.

Rs. 29.97 crore was sanctioned by the State Annual Action Plan Committee for 3 years (2017-18, 2018-19 and 2019-20), including development of a District-C, Sewage Treatment Plant at Kesare to prevent sewage water from entering into River Cauvery River. This project is worth over Rs.18.87 crore.

The Hongalli 3rd Stage was built in 1979 and as such, components like raw water channel, flash mixer, clariflocculator, alum tank, filters and associated electrical equipment was in a dilapidated stage. These components have now been upgraded. Also, the earlier water treatment capacity was increased from 40 MLD to 65 MLD using the modern technology Johnson ‘V’ wire filters.

Incorporating the newly constructed pump house to accommodate two 1,500 HP pump sets and 1,168 mm diameter MS pipeline from Hongalli to Central Service Reservoir, the scheme was commissioned on 02.03.2021 to provide the city with 19 MLD of additional water. The total expenditure to the end of June-2021 is Rs. 82.72 crore.

Under Package 2 AMRUT, augmentation of Kabini bulk water supply scheme to Mysuru City under JnNURM has been taken up at Vijayanagar Fourth Stage. This is to supply water to Mysuru city and 30 villages from Kabini River.

The project was approved on 16.12.2008 with an estimated cost of Rs. 108.81 crore. Under this project, a total capacity of 184 MLD is planned to be taken up in three phases. The infrastructure and pipelines are built to a capacity of 184 MLD and water treatment for 60 MLD.

The scheme was commissioned on 22.10.2012 and under this project, the construction of 10 lakh litres of sump-cum-pump house and allied works were taken up at an estimated cost of Rs. 3.29 crore and the work has been completed.

Works on pump house, erection of two 200 HP centrifugal pump sets and 11 KV express feeder main works were proposed at an estimated cost of Rs. 2.50 core. This work was awarded to Killedar Electricals, Dharwad and the works have been completed. From here, water will be supplied to Vijayanagar Second, Third and Fourth Stage, Hootagalli and KHB Colony.

Mysuru Kodagu MP Pratap Simha has contributed immensely to this mega project and was instrumental in getting 50 percent of the grants (Rs. 78 crore out of Rs. 156 crore) from the Centre under AMRUT scheme.

Till 2015, the covering of the water tank at Vijayanagar Second Stage was dilapidated and had many holes on it and was in a dangerous situation as no attempt was made to repair the same but only patch-up works were taken up.

It was Pratap Simha’s untiring efforts with time-to-time inspections and meetings, along with active contribution from the State Government, Mysuru City Corporation (MCC) and Mysuru Urban Development Authority (MUDA) that the project has seen the light of the day. Expressing his gratitude to the Centre, the MP has thanked Prime Minister Narendra Modi for granting funds for the project.