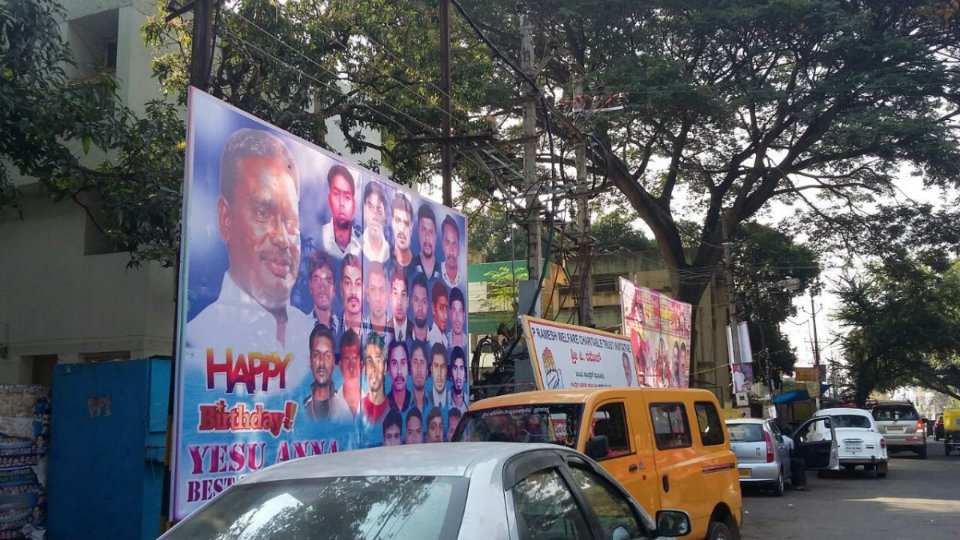 No more flexibility over flexes: MCC

Mysore/Mysuru: Unauthorised flex boards and banners are cropping up in the city though the authorities have declared Mysuru as a “flex-free” city in tune with its tourism and heritage status.

Come festivals, birthdays of politicians and local leaders or conventions by political parties, groups and communities, Mysuru is completely overrun by flexes and banners in every nook and corner of the city or a particular area. These flexes, unanimously take over the city including trees, electricity poles, road dividers, medians, and even pedestrian tracks.

These flex banners cause visual pollution and mar the ambience in which they have been installed and a majority of boards have life-size images of local followers of political leaders greeting people or wishing their leaders on their birthday.

Though Mysuru City Corporation (MCC) receives numerous complaints on city defacement, the civic body has not taken any action in this regard. Now MCC has decided to crack the whip under The Karnataka Open Places (Prevention of Disfigurement) Act 1981 and The Karnataka Municipalities Act 1964. Under the provisions of the Act, a person can be sent to six-month imprisonment and a fine of Rs. 1,000 can be levied.

MCC has also issued a circular noting that advertisers, publishers, printers and any person who display these photographs and flexes would face criminal prosecution. The rule comes to immediate effect.

Though MCC officers often claim they are vigilant against any mushrooming of flexes across city, they admit that many times their drive would attract the wrath of political parties, especially during elections.