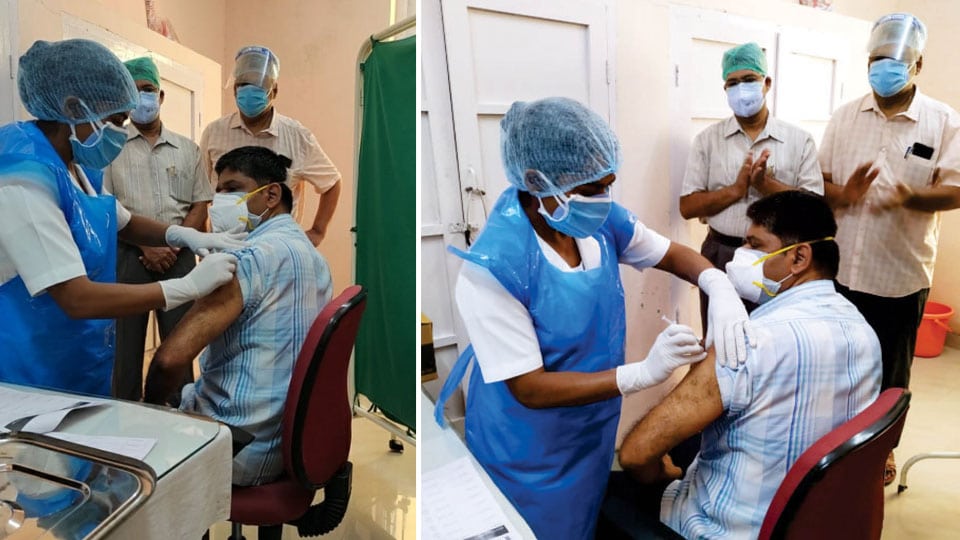 Rahul Agarwal, Divisional Railway Manager, SWR, Mysuru, congratulated the Railway Hospital authorities for their job of swiftly immunising the frontline staff of the Hospital as per the extant protocols communicated by the Union Ministry of Health and Family Welfare.

Agarwal also stated that besides healthcare workers, other frontline workforce of the Division like the guards of passenger-carrying trains, loco pilots, staff from travelling ticket checking, booking counter, house-keeping, helpers, Railway Protection Force Personnel and other onboard staff will be considered as frontline workers and immunised in the first phase.

On day one, around 100 health workers had registered on the CoWin App to be in line for receiving the vaccination. Separate reception, waiting lounge, and observation room for monitoring the Adverse Events Following Immunisation (AEFI) are provided in Railway Hospital for smooth implementation of the programme.

Shivamogga Town Health Unit will also be beginning their immunisation campaign from today for frontline staff, stated a press release from SWR.