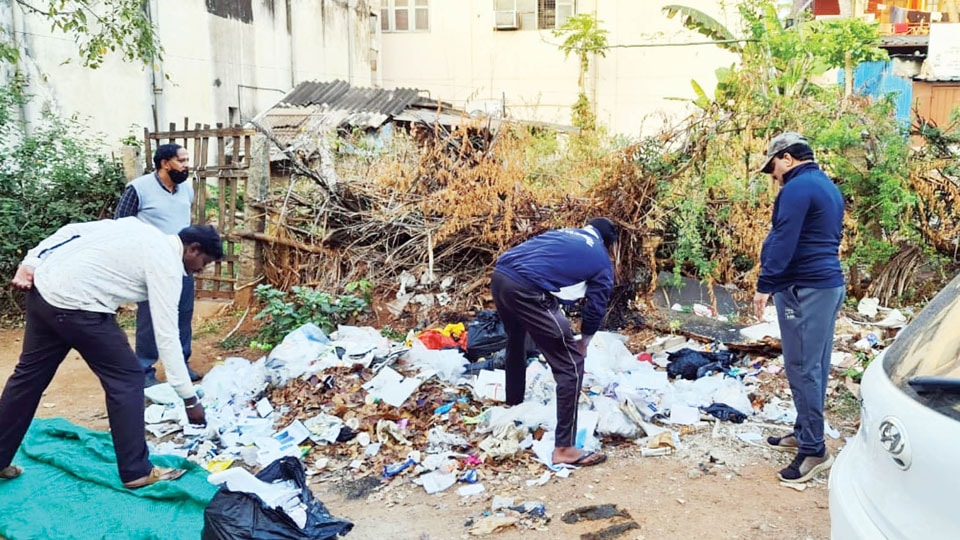 Mysore/Mysuru: The Mysuru City Corporation (MCC) will slap fines for violations in garbage dumping rules in a bid to boost the overall cleanliness of the city and to improve its ranking in the Swachh Survekshan Survey. Setting an example for this, two mobile phone showrooms in city were penalised for dumping garbage.

To boost its rankings in the next Swachh Survekshan Survey, officers and staff of MCC are visiting roads, localities and residential areas daily to identify potential places that might harm the civic body in the rankings. Officers, including the MCC Commissioner, are visiting each Wards and identifying unclean spots and are trying their best to address the cleanliness issues.

During one such visit in Zone 3, Ward 47 near Akshaya Bhandar, garbage was found dumped in front of two mobile phone shops and one electrical appliances shop in Sharadadevinagar. The garbage was traced to the particular shops after the MCC officials found bills and address slips inside the boxes.

The staff who man the shops were told not to dump garbage in an indiscriminate manner and dump it as per guidelines. A fine amount of Rs. 1,000 each was levied on the shops for violation. Speaking to SOM, Zone 3 Commissioner Sathyamurthy said that they have been visiting all Wards in all the nine zones of the MCC from 7 am to 9 am and are identifying places where people generally throw garbage.

As part of the visits, houses, shops and business establishments who dump garbage are identified and are penalised. Apart from penal action, the waste is brought back to the respective shops and houses and dumped before them, forcing the premises owners to pay the fine and dispose of the garbage responsibly. All Zonal Officers, Health Inspectors and Environment Engineers are a part of this exercise.