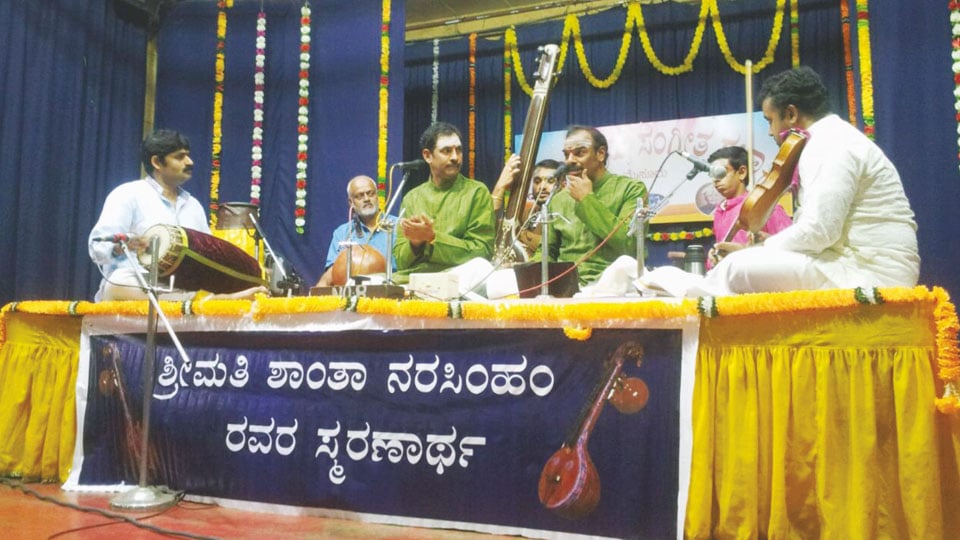 An Evening of Melody…

On 18th of January, Malladi Brothers — Sriramprasad and Ravi Kumar — sang for Sri Nadabrahma Sangeetha Sabha. They were accompanied on violin by H.N. Bhaskar, on mridanga by Tumkur B. Ravishankar and on ghata by G.S. Ramanujam.

Born with a legacy accrued through their grandfather late Malladi Sri Rammurty and their father Malladi Suri Babu, Malladi Brothers possess a large repertoire of Karnatak compositions. The rare Varna in Asaveri ‘Jalajakshi’ was an energetic presentation. ‘Vande Nishamaham’ by Mysore Vasudevacharya was noted for their synchronised voices. The swaras developed for ‘Bhasamana’ had a rare tinge of novelty. ‘Brihadambikayai Namaste’ by Dikshitar’s in Mishra Chapu brought out the essence of Vasanta in its rendition and Swaras.

Kannada Gowla is a raga hardly taken for detailed rendition in a concert. Ravi Kumar essayed the raga beautifully and proved that though some ragas are branded as ‘the ones not with enough scope for elaboration,’ they can be elaborated if the vocalist has the caliber to do so. In the presentation of Tyagaraja’s ‘Sogasu juda tarama’, Sri Ramprasad explained how Tyagaraja glorifies the beauty of Rama in the composition — His face shining with glossy cheeks, his red lips resembling a bimba fruit, his charming smile,  and his forelocks beautifully decorating his face. The simplicity of the sahitya matched every bit by the brilliant rendering of the song.

The brothers chose the right tempo for the song laying emphasis on the right words and phrases. The neraval and swaras for the pallavi were excellent bringing out Raga Bhava with each phrase.

Sri Ramprasad rendered the Varali alapana followed by a rare composition of Tyagaraja- ‘Ne pogadakunte,’ which also found an interesting neraval at ‘Neeraja Nayana Sri Tyagaraja Charana.’ Mysore Sadashiva Rao’s ‘Ninnuvina Gati Naga parula’ in Malahamsa was rendered with an observation that the brothers also belong to Tyagaraja lineage. The highlight of the concert was Shankarabharana with a distinct and never-heard-before-sancharas-filled alapana by Ravi Kumar. His Alapana was a harmonious blend of  known, must & should sancharas and rare ones, giving the listener a feeling of gratification. Deekshitar’s not-so-frequently sung ‘Dakshina Murte’ in Mishra jhampe was rendered with majesty suffixed by mathematical swaras at the pallavi.

Bhaskar was quick to produce any complicated phrase sung by the brothers. Tumkur Ravishankar and G.S. Ramanujam’s erudite scholarship in laya intricacies came to fore in the taniyavartanam. In the post tani part, the brothers presented the very beautiful ‘Paluku tenela talli’ by Annamacharya in Abheri, Devaranama ‘Venkatesha Daya Mado’ in Shahana by Sri Purandaradasa and ‘Madhava Mamava’ in Neelambari by Sri Narayana Teerthar.