Mysuru: After the successful launch of the first public bicycle sharing system in the country, on June 4, 2017, the District Administration and Mysuru City Corporation (MCC) have decided to make changes in the usage fees and membership plan, which will come into effect from Feb.1.

According to the revised usage fee tariff, unlimited free rides up to 30 minutes only will be provided to the Trin Trin members, unlike in the past where the members could ride the bicycles free for one hour.

This decision was taken at a meeting chaired by Deputy Commissioner D. Randeep this morning at his office.

Addressing the Media after the meeting, he said that it was found that the number of usages had reduced as the people who took the bicycles for free rides had increased and as a result the number of bicycles in the docking stations for those who wanted to take it on long rides had decreased.

Though there is a steep hike in the fee from one hour to six hours, the hike from six hours to more than 12 hours in fact has not only been marginal but also  reduced. The revised fee for six to eight hours is Rs.120 from a previous fee of Rs.100, while it has been reduced by Rs. five for the other two slabs. Hence it has come down from the existing Rs.150 to Rs. 145 for rides from eight to 12 hours and from Rs. 250 to Rs. 245 for greater than 12 hours. 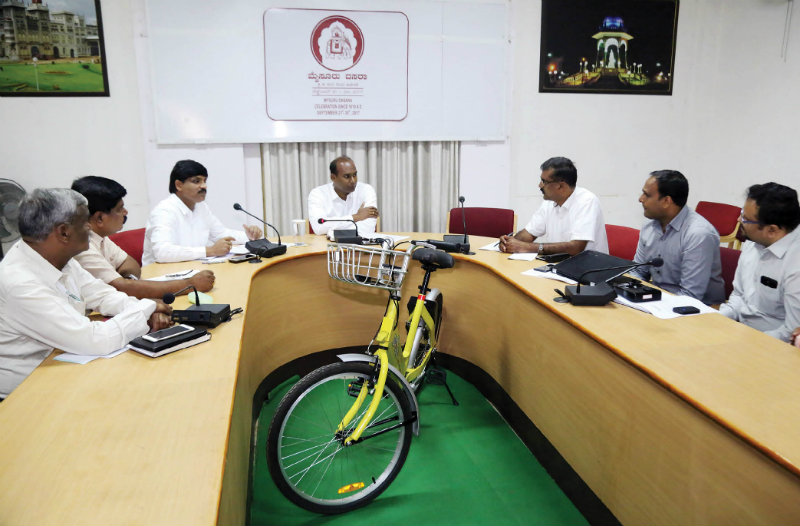 Deputy Commissioner D. Randeep chairing a meeting to discuss about the revise

The DC also disclosed that there will be dockless stations where the bicycles riders can leave the bicycles and lock them using the mobile phone using GPS Remote control that will be provided to the members.

Since Mysuru is touted as a cycle-friendly city, there are going to be dedicated bicycle lanes on KRS Road and JLB Road and cycle lanes and walking paths on seven roads that include Old Bengaluru Road, Mysuru-Bengaluru Road, Vishwamanava Double Road, Bogadi Road, Krishnaraja Boulevard Road, JLB Road and New Kantharaj Urs Road, he said.

There are also plans to introduce electric bicycles for the elderly as a pilot project. “The technical committee has approved the condition and maintenance of the Trin Trin bicycles,” said Delta Company’s Project Manager H.S. Mahesh.

The public has requested for additional docking stations in 19 places in the city and an additional 13 locations have been proposed in Phase-1, said Randeep.