Home » Columns » An Unforgiving Raja Marga and an Unrepentant Administration! 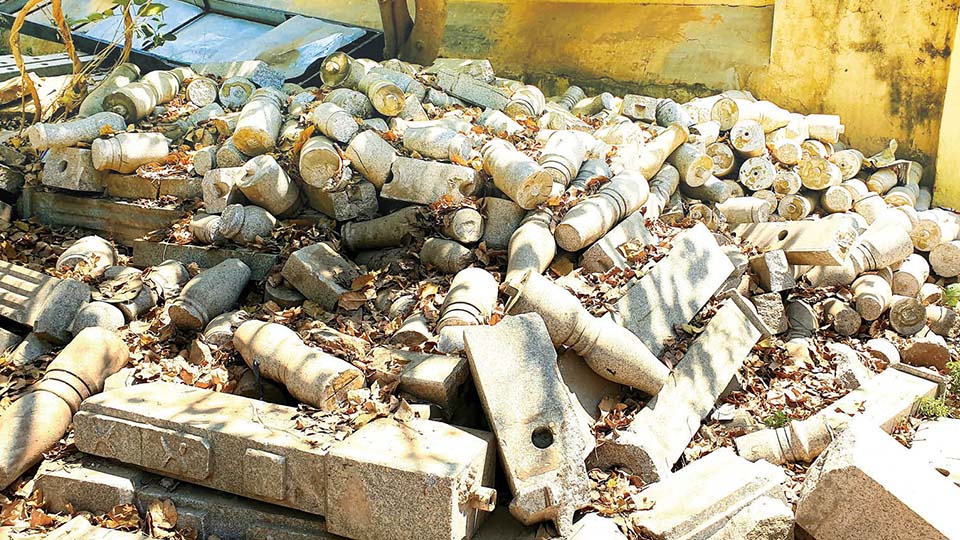 An Unforgiving Raja Marga and an Unrepentant Administration!

Just a few days ago, even as our annual Dasara festivities came to an end, SOM published a front-page report which said that the ornate stone balustrades that had been erected along our so-called Raja Marga of dubious fame in our city, had collapsed in not less than fifty-seven places. This periodic collapse of portions of the very expensively fabricated granite balustrades has been an ongoing process and it began even as the work of erecting them was still underway!

This speaks of how ill-conceived this over hundred crore rupee project was and how shoddily and hastily the work was done by an unholy nexus of politicians, bureaucrats and engineers, all hand in glove with one another, only to make a quick buck. And, this they did at the expense of helpless citizens, some of whom cried themselves hoarse that the whole project was completely flawed and therefore unnecessary to beautify a city that was only crying for some much-needed attention to preserve the beauty that it already had.

I was one among them, having written two full length articles, more than a decade ago, about how very impractical the whole exercise was and why it should have been shelved before starting it, instead of being executed at great cost only to be abandoned midway as was done most unceremoniously. The result is that huge heaps of the debris of these crumbled stone balustrades can today be seen at the MCC Zonal Office near Pathrakartara Bhavan off Thyagaraja Road.

Granite, as most people know, is no doubt a very hard kind of stone but it is also extremely brittle. While any structure built with it can bear an almost unlimited amount of load that is placed on it vertically, it is next to useless in resisting any fracturing force that is exerted on it sideways. This basic property of this very abundant and commonly used building material is something that has been known even to our most humble and completely unlettered artisans, who by their common sense alone, have left marvellous examples of their amazing engineering abilities over the centuries, starting right from prehistoric times. Forts and citadels across the world and free standing massive Hindu temples in particular, across our country and also at the Angkor Wat site in Indonesia, most of which have been erected without any kind of cementing material, tell us about the great skills of those who toiled to create them. 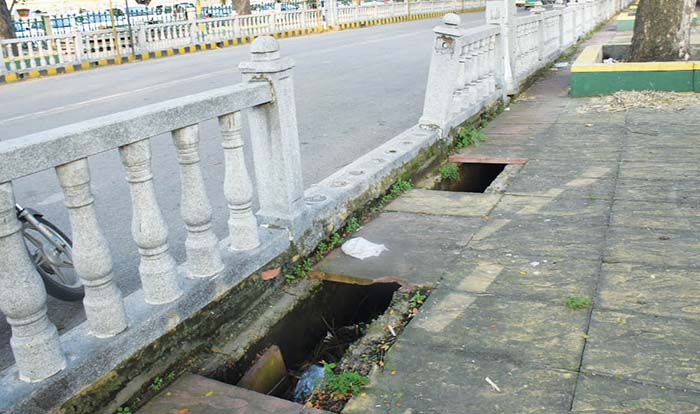 The fact that these structures are still standing erect and tall, even many centuries after they were built and left completely untended, bears silent testimony to both the abilities of our craftsmen and the inherent properties of the materials they worked with. But it is sad and very lamentable that our present-day engineers and artisans who are supposed have honed their skills at the temples of learning that our engineering colleges are, have only been able to sully their reputation by executing works of very inferior quality and short-lived durability.

This is not the case just with our Raja Marga balustrades but with almost every one of the works that have to do with the maintenance and upkeep of our cities and towns. All around us we see roadside storm water drains being made at great cost that have neither entrances or exits, let alone the right kind of gradient to let the rain water in. A very glaring example of this kind of purposeless engineering can be seen just outside our city, alongside the new Mysuru-Bengaluru Highway that is being gifted to us. Although I have stopped and spoken to them at length on many occasions and locations, no one working on them or supervising the work, was able to explain to me the physics of how the rainwater is expected to defy gravity and find an entry into them, thus completely defeating the only reason why they are being made! The basic flaw in their design has been pointed out to the authorities in charge of the work through many readers’ letters to newspapers, supported by photographs but to no avail. This kind of shoddy work goes on unchecked and unhindered.

The SOM report about the crumbling Raja Marga balustrades with which I have started this article, also speaks of the extremely poor quality of the cement slabs used to cover our roadside drains across the city in general and around our Palace in particular. It is supported by pictures of their present pathetic state less than three years after they were laid. Here too, even as this work was being undertaken and the extremely thin and fragile looking slabs were still being unloaded from trucks around the Palace, I had written an article about how they would never be able to withstand for long the brunt they were supposed to bear. But this work too went on unhindered and although a citizen soon fell into a drain and got injured seriously, creating much public uproar, nothing was done to replace the slabs with stronger ones and that is why today we see innumerable gaping holes in our drains that pose a grave threat to public safety. The rather recently constructed compound wall of our Bannimantap Grounds that is the venue of our famed Dasara Torch-Light Parade is another example of ill-conceived engineering. Even as it was being put up, I pointed out in an article that its design itself seemed very alien and far removed from the architectural character of the other heritage structures in and around our city and it would therefore stand out as a  sore thumb.

I also pointed out that topping it with terracotta roofing tiles was a very bad idea because by being inherently very fragile and within reach of vandalising hands they would not last long. This is exactly what started happening in just a few months which left the wall looking much mauled and marred. The result is that now better sense has dawned on our authorities and the wall is being repaired and redone at great cost, with more durable plain cement. It is indeed sad that while a much jinxed and very unforgiving Raja Marga seems hell-bent on teaching a painful lesson to an unrepentant administration, it is only the citizens who seem destined to bear all the pain!

5 COMMENTS ON THIS POST To “An Unforgiving Raja Marga and an Unrepentant Administration!”