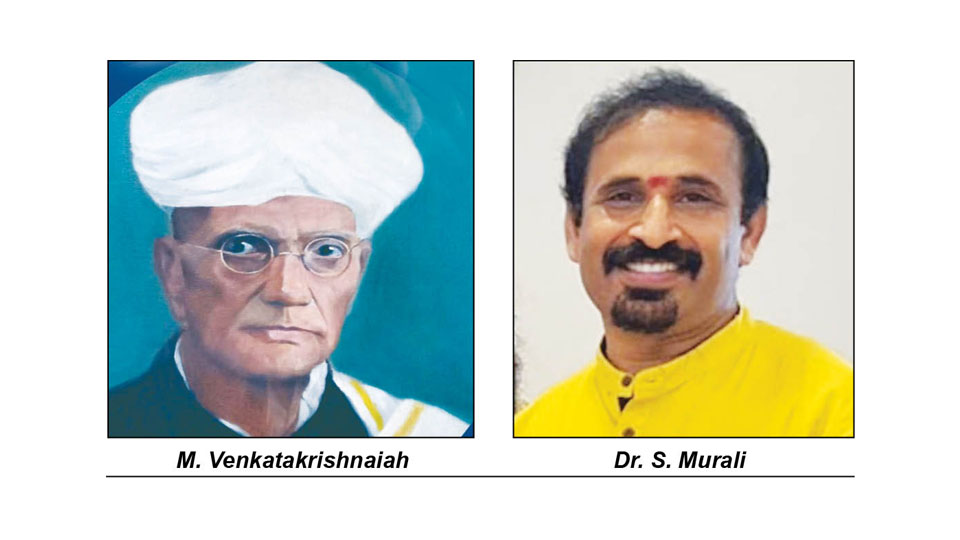 The Anathalaya on Narayana Shastri Road, Mysuru, founded in 1896 to serve the poor students, this year is celebrating   Thathaiah’s Day at 4 pm on Saturday, 10th September 2022, at the Anathalaya premises.

The celebration coincides with the commemoration of the  178th birth anniversary of its Founder, the Grand Old Man of Mysore, Vrudhapitamaha, Daya Sagara, M. Venkatakrishnaiah.

Every year on the occasion of the Founder’s Day celebration, the institute confers Thathaiah Award after the name of Vrudhapitamaha, Daya Sagara, M. Venkatakrishnaiah  and  carries a purse of Rs. 25,000.

The award is conferred on persons of high achievements in the field of education, journalism, social reforms and service to society. This year’s award will be conferred on Dr. S. Murali, the renowned Educationist and Eminent Computer Engineer popularly known as “Software Ratnakara.”

S. Murali holds a Ph.D in Computer Engineering from the University of Mysore (UoM) with a teaching experience in engineering subjects for more than 33 years. He has to his credit more than 250 research papers at National and International levels. Murali has conducted several workshops on Computer Vision and Image Processing technology.  He has guided more than 16 Ph.D scholars.

Hailing from Magge village in Anatharasanthe hobli of H.D. Kote taluk in Mysuru District, Magge Venkatakrishnaiah, popularly known as Thathaiah, and always referred  as the Grand Old Man of Mysore established this institution in 1896. He came from a very poor family that migrated to Mysore and was joined by several like-minded people such as Ambale Annaiah Pandit, C. Narasimhaiah and others to serve the cause of poor students by providing free food and shelter.

Initially, Anathalaya was established by Swami Nanjunda Saraswati at Niranjana Mutt premises on Krishna Vilasa Road. Later some land was allotted near Subbarayanakere on Narayana Shastri Road. At this stage, Thathaiah took charge of this institution when over a period of time Advocate K. Chandrashekharaiah,  Chartered Accountant P.R. Hariharan, landlord Mirle Najundaiah, Prof. S.V. Ranganna and Thathaiah’s grandson, M.S. Srinivasa Rao joined the humanitarian crusade by making major contributions  to develop this institution for serving the cause of poor students coming from villages  in and around Mysore district.

READ ALSO  ‘Thathaiah still remains alive amongst us for his service’

Among the alumni of this institution who have made a mark in their lives with high achievements and meritorious public service include  well-known names like C. Narasimhamurthy, IAS, Keshavamurthy, Economist, S.L.N Simha, Actor, S.R. Rao, Space scientist, Dr. G. Ramakrishna, Thinker, Saraswati Samman awardee and novelist Dr. S.L. Bhyrappa, senior RSS leader N. Krishnappa and C.V. Gopinath, former Additional Secretary to Government of India. Their work and attainments project the  caliber of the products of this institution.

Until 1975, Anathalaya  mainly depended on revenue sources  obtained from places like Mirle, Hole Narasipur and other places through the cultivable land owned by Anathalaya, that initially came by way of donations by several donors throughout Karnataka and the old inmates of the free hostel. Later, due to the enactment of the  Land Reforms Act, all the land holdings were lost for a meagre compensation.

Presently, the Anathalaya also runs a separate hostel for girl students on a building offered free of cost from the endowment of P. Hariharan Charitable Trust.  Besides, several students pursuing their studies in various faculties like engineering, medicine, commerce, science, management studies and arts are supported by the Anathalaya.

Thathaiah was a great visionary and the title Grand Old Man of Mysore was given by the Mysore Maharaja. As an apostle to journalism, he helped in establishing Sadhvi newspaper and also had  arole in establishing Sarada Vilas Educational Society and Marimallappa’s School.

A champion of women’s emancipation and female education, Thathaiah encouraged girls’ education and set an example by making his own wife learn by encouraging her to undertake formal education.

Unfortunately, being in a remote place, Thathaiah could not come to the forefront of the national scenario even as he was very popular amongst all the communities of the society transgressing the barriers of caste, creed and religion.

When my friend asked me for a loan of one rupee…

I am proud to be the alumnus of this great institution (Anathalaya). I was a beneficiary of this organisation during 1960-61. It taught me values and discipline.

I had a friend by name Anatharamu staying in the same institution who later retired as Principal of Hardwicke High School on JLB Road. My dear friend is no more.

One day he had asked me for a loan of one rupee and I hesitated to give him thinking that he may not return the money. One rupee was a very precious possession then. Simultaneously I also did not want to disappoint my friend. So I got a letter written by him that he owes me rupee one as a loan which he promptly did and took the money.

On his return from the village he paid me back my amount. A few months later there came an occasion that I wanted a loan of two rupees from him. He gave me the amount straight away. Sheepishly, I wanted to give a letter to him owing the loan. But he held my hand and said that he believes me. That day I had learnt a lesson of my life to believe a person.

Later when I was a Project Director during mid-80s, working for Government of India, my subordinate brought me a file for an approval of an expenditure of Rs. 3 crore. Without reading the file I approved the expenditure. My subordinate was scared and he asked me to take my own time, read the file and then approve it.

I told him that he cannot go wrong and I believed him. It was my subordinate’s turn to say that he will re-assess the expenditure and come back again with a fresh proposal.

He did come back by reducing the expenditure by Rs. 30 lakh. He said he felt that I may not approve the expenditure and may not agree with him and hence he jacked up the figures for bargain to get the real expenditure. He said that in future he will not repeat such conduct. The lesson learnt was: ‘You believe a person and the trust will be reciprocated.’

My experience of college days in Anathalaya have moulded me and even inculcated values like kindness, compassion, co-operation and empathy for others. I attribute it to this great institution and the creative environment in which we were brought up.  – C. V. Gopinath