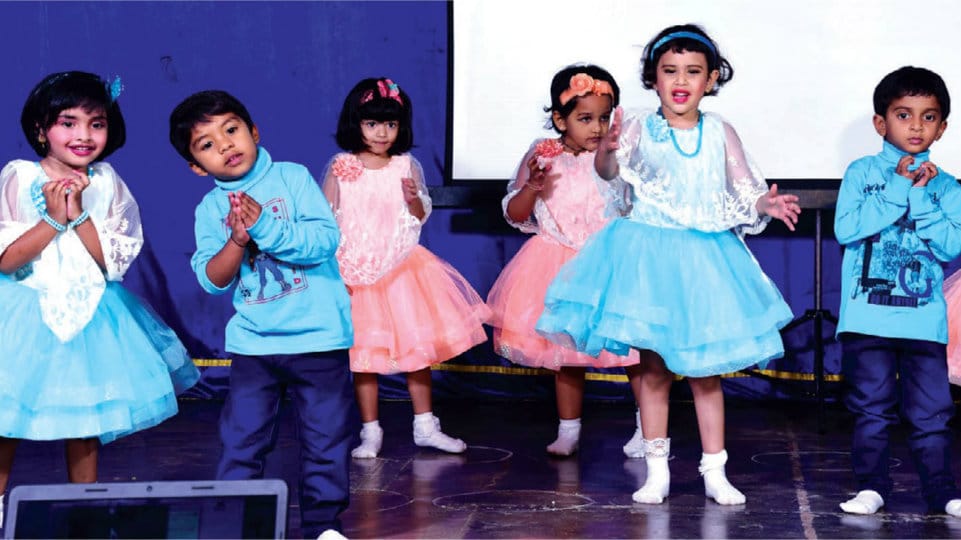 Orchids School: Annual Day was celebrated at The Orchids Public School and PU College with the theme ‘Save Rivers’ to create awareness about the importance of rivers, at Kalamandira here recently.

The programme was inaugurated in a unique way by offering water from ‘Kalasha’ by the dignitaries which flowed through the lines on the Indian map indicating flow of water through major rivers in India.

Prof. M. Krishnegowda, who was the chief guest on the occasion, appreciated the efforts by the school and the students in presenting wonderful performances which had a purpose of bringing awareness among future citizens on the role played by rivers in our life and the role we should play as humans to save them and regretted on how everything humane is taking a back seat because we as parents stress money over virtues.

Singer M.R. Shreeharsha, who spoke as the guest of honour, taught values to the students and the gathering by singing songs.

The origin of rivers and the culture of the settlements on the banks of them were depicted in the form of dance and drama. Pollution of rivers and what’s our role in saving them were shown as well with a varied range of programmes performed by the students from Pre-KG to II PUC.

Performance by the children of ‘Aastha,’ a school for specially-abled from the Orchids Education Society, was applauded by all. Students who excelled at academics and co-curricular activities were awarded by the guests on the occasion.

Special prizes of excellence and prizes for Viveka Pratibha Inter-School Competition were also distributed. The Rolling Shield was bagged by Pramathi Hillview Academy.

On the occasion, the management felicitated four staff members. Indira Shivaraman proposed a vote of thanks. N. Geetha compered. The formal function was followed by a cultural extravaganza by the School children and PU students.

Little Elly Pre School: To inculcate importance of nature among children, Little Elly Pre School, Bannimantap, celebrated fourth Annual Day on theme ‘Nature’ at Ganabharathi. The tiny-tots came out with various performances including dances and dance-dramas. They also presented a live demo on natural calamities which made the celebration more informative.

SSLC and PUC Rank holders were felicitated with Gold medals by Pujya Swamiji.

Swamiji advised the students to inculcate good behaviour from the home itself to be a good citizen. He also called upon the parents to create such an environment to students to grow well educated.

R. Guru, Chairman, Vijaya Vittala Educational Institutions (VVEI), presided over the function. In his presidential speech, he advised the students not only to succeed in academics, but also to move forward with courage to achieve in life.

The programme concluded with ‘Bharatha Kala Darshana,’ a colourful bonanza by students.

CFTRI SCHOOL: The 53rd Annual Day celebrations of CFTRI School, amidst great zest, vibrancy and elation, brought out the essence of cultural diversity and rich heritage of the country.

Prof. Gopal, who was the guest of honour, shared his vision for the institution. The programme commenced with the lighting of the ceremonial lamp. Meritorious students in academics and extra-curricular activities were feted.

The cultural programme, with ‘colours of life’ as the theme, saw some riveting performances by students. The event started off with a prayer dance and concluded with a grand finale celebration by all the participants and teachers. The evening witnessed a colourful array of dances and musical acts. ‘Sabse nyara gulistan hamara hai’, ‘Mathru vatsalya’, ‘The legend of Bahubali’ and South Indian dance forms stole the show. Staff Secretary C. Ramya proposed a vote of thanks. English teacher Sadia Shifa compered. Anchors of the cultural programme were X std. students, N. Hemachandran, S. Darshan, S. Haripriya, N. Rakshita and V. Bhumika Kothari. Performances were choreographed by R. Manjunatha of D2 Dance Academy.