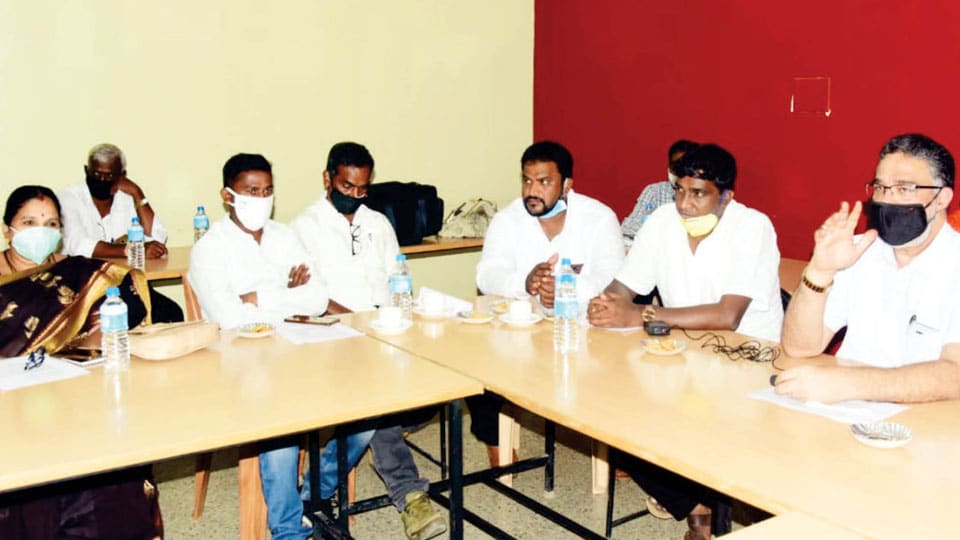 Another COVID Care Centre to come up in NR Constituency

Mysore/Mysuru: Congress MLA Tanveer Sait, who heads the NR Constituency COVID-19 Task Force, said that another Covid Care Centre(CCC) will be coming up in the Constituency soon.

In his first Task Force meeting held at his residence in Udayagiri on Saturday, Tanveer Sait directed the officials to get prepared for setting up the third centre in the Assembly segment. Suggesting that the CCC set up at the State-run Beediworkers Mazdoor Hospital at Azeez Sait Nagar be run by the Government itself, he said that the authorities can visit VTU, Teresian College and Government Hostels for setting up CCCs. He also directed the officials to set up Fever Clinics at Rajeevnagar, Giriyabovipalya and Yeraganahalli.

Continuing, Sait said that officials should create more awareness among the public by distributing pamphlets on maintaining COVID-19 regulations printed in Kannada, Hindi, Urdu and English languages. Stressing on the need for carrying out more Rapid Antigen Tests, he said that the authorities must look at entering into a tie-up with retired Government doctors who are running clinics.

Pointing out that the funeral of the bodies of COVID-19 dead should be carried out as per the protocol laid out by the Government, the MLA said that the Task Force should include the ACP of NR Sub-Division and all Police Inspectors coming under it, as members.

In his second meeting held at Apna Ghar Hall, Siddiqinagar in  Bannimantap yesterday, Sait called for expediting Rapid Antigen Tests to arrest the spread of the deadly pandemic. The Health Department officials, who apprised Sait on the statistics concerning conduct of tests and the number of positive cases in NR Constituency, said that three places have been identified in the Constituency, out of which one is already functioning and the rest two will come up in a couple of days. The MLA was also told that out of the tests conducted on 1,049 persons in NR Assembly segment, 249 had tested positive.

The meeting passed a few resolutions, which chiefly included gathering complete information regarding all Government, Private, COVID and Non-COVID Hospitals in NR Assembly segment, appointment of MCC Zonal Assistant Commissioners as Nodal Officers for COVID Care Centres; Incident Commanders should submit a list of their requirements of Ambulances and Autos for house-hold distribution of pamphlets and conduct of the funeral of COVID dead in accordance with the protocol, among others.