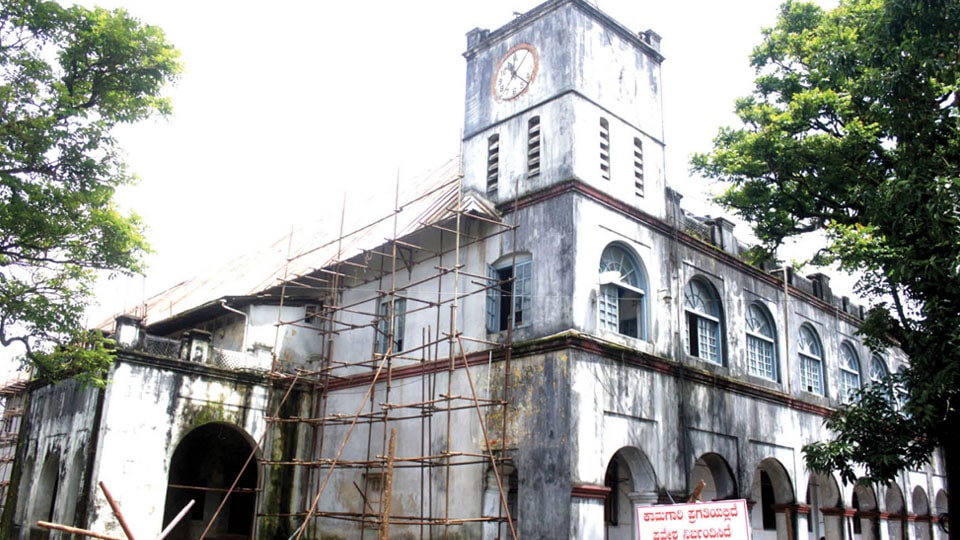 Madikeri: With the State Cabinet on Thursday sanctioning Rs. 8 crore for the renovation of the historical Madikeri Fort, the works on which has been taken up by the Archaeology Department, Madikeri MLA Appachu Ranjan has batted for retention of old architecture and heritage characterisitics of the structure, while also giving a modern touch to it.

Speaking to presspersons after inspecting the ongoing renovation works of the Fort located in the heart of Madikeri City, Appachu Ranjan, who is also a former Minister, said that as an MLA earlier too, he had raised the Fort renovation and development issue a number of times in the Assembly.

Pointing out that the renovation works has been taken up following a High Court order, he said that now the State Government has sanctioned Rs. 8 crore for the works and it is satisfactory to note that the works have been taken up at last.

Asserting that Madikeri Fort and the associated Palace is symbolic of Kodava tribe, he said that it was important to develop the Fort as a Museum, while retaining the original  architectural characteristics of the structure.Underlining the need for installation of Sound and Light system in the Fort  premises once the renovation works are completed, he said that the richness and uniqueness of Kodava culture, customs and traditions must be portrayed through this system, just as being done in the case of freedom fighters such as Veer Savarkar and Bhagat Singh at Andaman Jail.

Earlier, Appachu Ranjan received inputs on the progress of works from the Department Engineer, who said that 5mm metal sheet has been cemented to the roof of the Fort. Expressing displeasure at the quality of the sheet, he asked the authorities to ensure quality of tiles, wood and other construction materials being used for renovation.