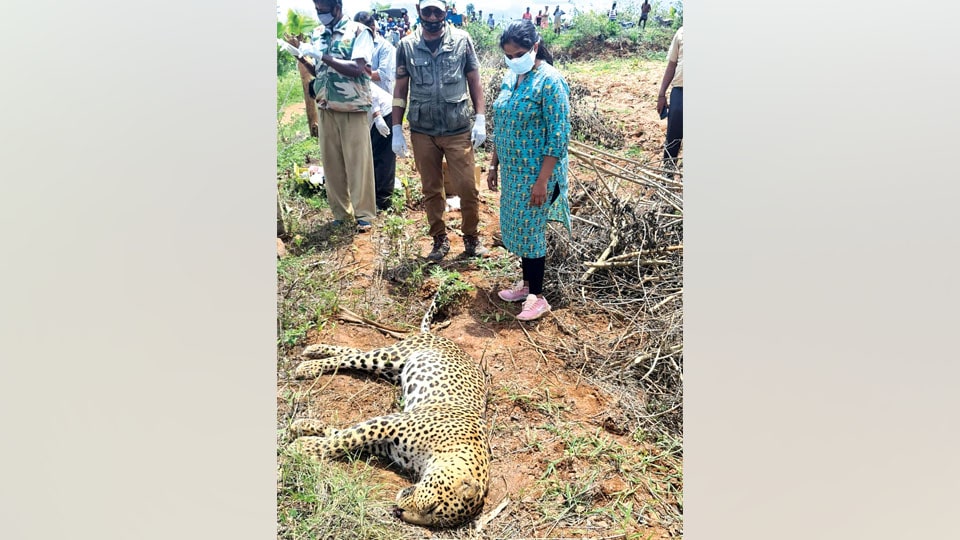 Mysore/Mysuru: The death of another leopard at an agriculture land in Naganahalli of H.D. Kote taluk in the district yesterday, is now a matter of concern, following serial deaths of leopards. This has left several wildlife lovers shocked.

While, the Forest Department officials were busy in conducting the post-mortem of a leopardess and a cub, which were found dead in an agricultural field at Kadabur in Nanjangud taluk yesterday, the officials received information of a carcass of a male leopard found at a field in Naganahalli in H.D. Kote taluk.

Soon, the Forest officials dashed to H.D. Kote and inspected the carcass of leopard aged about six years and did not find any wounds on the body. They have suspected that the leopard may have been poisoned or electrocuted. Later, the veterinarian conducted post-mortem and the carcass was cremated in front of higher officials.

After conducting post-mortem of the three leopards (two in Nanjangud and one in H.D. Kote), viscera of these felines were collected and the samples have been sent to Institute of Animal Health & Veterinary Biologicals (IAHVB) in Bengaluru and Forensic Science Laboratory in city to ascertain the exact cause of  the deaths.

Meanwhile, M.S. Gururaj Shetty, an environmentalist, residing at Devaraja Mohalla in city, claimed that 10 leopards had died in 12 days in the district.

He urged the Forest Department to respond immediately to the grievances of villagers whose livestock were killed by wild animals and take steps to provide adequate compensation at the earliest, which in turn would reduce their anger on wild animals. Also, steps should be taken to create awareness on conservation of leopards among the public, he added.

Deputy Conservator of Forests Dr. K.C. Prashanth Kumar said that five suspects have already been questioned in the Belavadi leopard deaths incident and it has been decided to conduct enquiry on three more suspects after receiving the lab reports.

All the three cases have been taken seriously and legal action would be initiated after receiving the report from the Forensic Science Laboratory, he said and urged the public to co-operate with the Forest Department in conserving wildlife. Killing a wild animal is a crime, he warned.